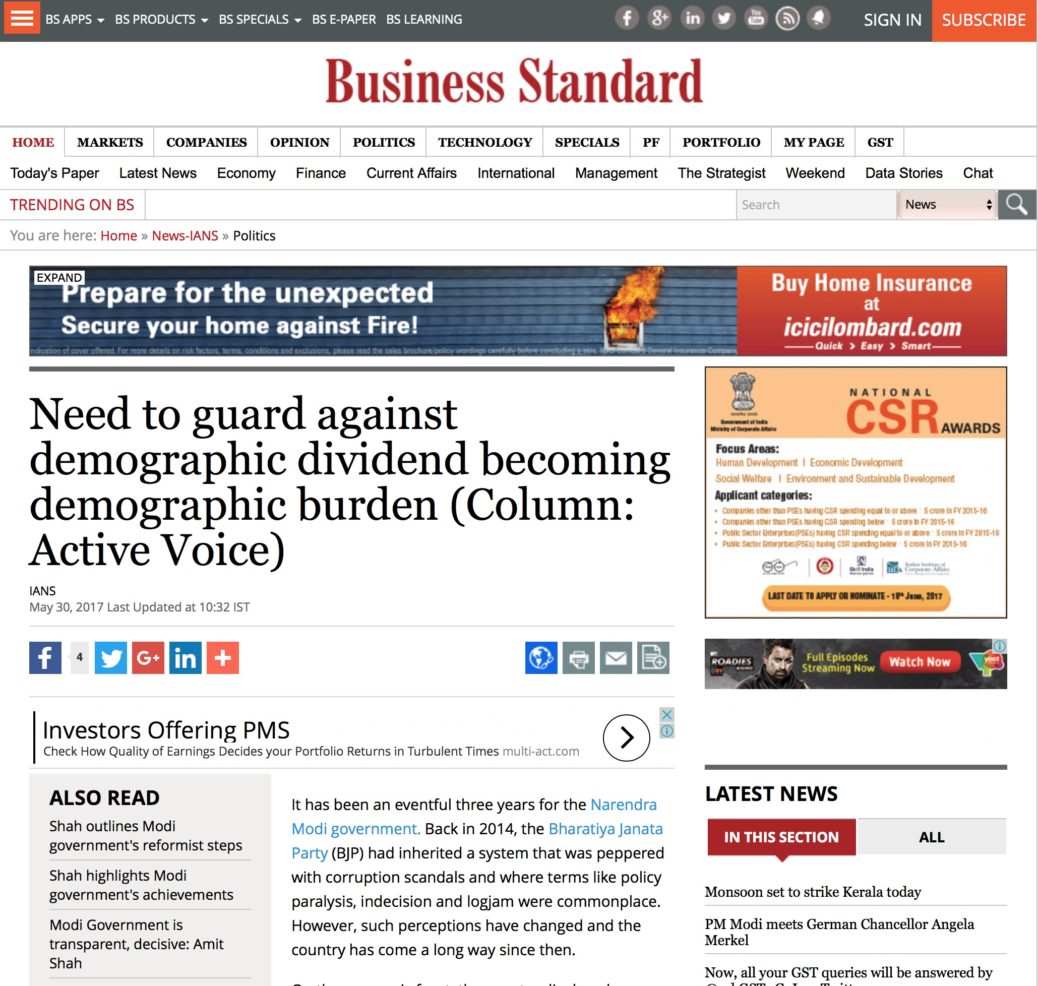 It has been an eventful three years for the Modi government. Back in 2014, BJP had inherited a system that was peppered with corruption scandals and where terms like policy paralysis, indecision and logjam were commonplace. However, such perceptions have changed and the country has come a long way since then.

On the economic front, the country displayed some worrying trends in 2014 that seem to have been contained. The average CPI (combined) inflation that was 9.5 percent in 2013-14 had declined to 3.7 percent by February 2017. This was mainly led by a drastic fall in food inflation from double digits to merely 2 percent in February 2017. Another serious cause of concern when the Modi government took over were the widening fiscal and current account deficits. The fiscal deficit as a ratio of GDP was 4.5 percent in 2013-14 while the current account deficit (CAD) stood at 4.8 percent of GDP. The former has fallen to 3.5 percent for 2016-17 and the latter is just a tad bit above 1 percent.

Moreover, the CAD has been largely funded by elevated levels of foreign direct investment (FDI) inflows that tend to remain in the economy for a longer term than volatile foreign institutional investment (FII) funds. India’s FDI inflows have more than doubled in the last three years from USD 22 billion to USD 46 billion. This boost in FDI inflows has been driven by the government’s consistent efforts to woo foreign investment into the country through its “Make in India” campaign. Since the launch of the campaign, India has received close to USD 100 billion as FDI inflow.

Macroeconomic stability has clearly improved in the last three years along with a rise in the country’s growth rate despite subdued global economic conditions. India’s GDP growth rate has risen from 6.5 percent in 2013-14 to almost 7 percent in 2016-17, despite the dampening effect of demonetisation on the economy. The country’s competitiveness also witnessed a sharp jump as evidenced by the Global Competitiveness Index (GCI) prepared by the World Economic Forum. Among 138 nations, India’s GCI rankings improved from 60 to 39 in the last three years.

On the institutional front, there were numerous bold initiatives undertaken by the government during the period. To begin with, the Nehruvian-era Planning Commission was dismantled and replaced with the NITI Aayog, which has become the go-to think-tank of the government. To rein in inflation, which had become a constant irritant, the Monetary Policy Committee was set up which independently decides interest rates for the economy to achieve pre-defined inflation targets.

The government has also been making positive institutional changes to achieve its aim of improving the country’s ease of doing business. India’s ranking has not considerably improved, but it has made significant improvements on some fronts. For instance, the process of company registration and incorporation, which took 7+5 days in 2014 has been brought down to a single day. These improvements are a result of a drastic reduction of unnecessary bureaucratic processes by leveraging technology. On a related note, stringent monitoring of files across government departments has ensured that delay in government clearances do not hold up projects, which had become a worrying problem for the previous government and was hurting investment activities across the country.

The implementation of GST from July will be yet another long-desired institutional reform that will make business operations more efficient. It replaces the myriad direct and indirect taxes that are currently imposed by the Centre and the states and unifies fragmented markets into a single national market. Further reforms include the implementation of the Real Estate Regulatory Act (RERA), which fulfils the long-standing need of a real estate regulator that bring in transparency into real estate deals.

With regards to the social sector, education and health policy across the country will witness radical improvements after the implementation of the National Health Policy and the New Education Policy that will soon be introduced into the Parliament. The list is long on the workings of the Modi government over the last three years. However, going forward, two challenges whose solution has eluded the government since it came into power are that of bad loans and jobs.

The proportion of NPAs in banks has been consistently rising over the years and unemployment has reached 5 percent. These are problems that will hang like an albatross around the government’s neck until resolved. These problems also run the risk of impeding economic and social progress of the nation in the long run. Therefore, their urgent resolution is imperative.

With the recent establishment of the Banking Regulation Act and reshuffling of top executives across banks, it is quite clear that policy makers are putting their best foot forward in resolving the NPA problem. The Act gives RBI more powers to effectively tackle bad loan cases. Hopefully, RBI’s direct intervention will expedite the decision-making process of banks and help them with early resolution of stressed assets.

On the other hand, the creation of jobs is an issue that the country has been grappling with since over a decade. Jobless growth has been the norm for the Indian economy due to concentration of that growth in sectors that are not labour intensive. Tackling the problem requires action on multiple fronts ranging from higher skilling in emerging sectors to a more radical movement of the economy towards a more manufacturing-led growth.

Creation of jobs in an economy that adds a million people to its workforce every month is easier said than done. However, failing to do so puts the country at risk of converting its demographic dividend to a demographic burden. Going forward into the second term, these two issues need to be at the top of the government’s agenda. In the last three years, it has proved itself to be more than capable of resolving such hard-hitting issues.

The article was published with Business Standard on May 30, 2017.