Lessons from the Bangladesh Growth Story 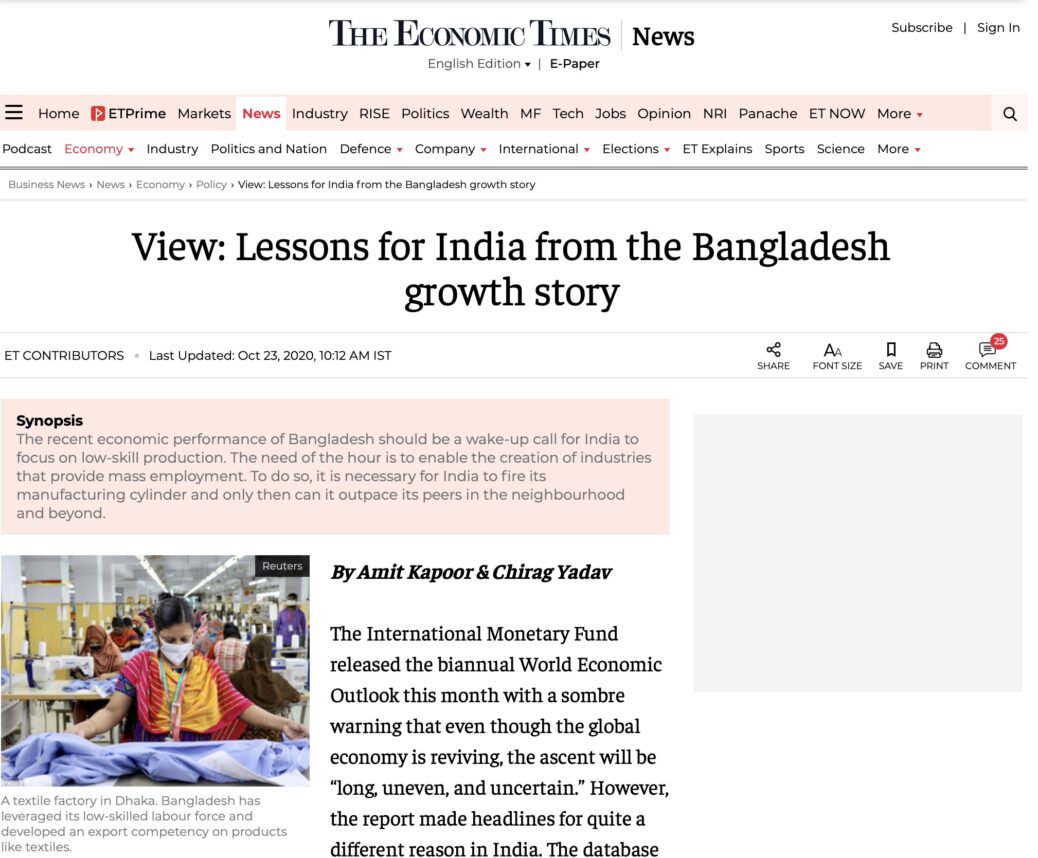 Lessons from the Bangladesh Growth Story

The International Monetary Fund released the biannual World Economic Outlook this month with a sombre warning that even though the global economy is reviving, the ascent will be “long, uneven, and uncertain.” However, the report made headlines for quite a different reason in India. The database released with the report showed that India’s projected per capita GDP will fall below that of Bangladesh in 2020. The numbers show that the COVID-19 crisis has hit the Indian economy much harder than Bangladesh in terms of growth. But even before the pandemic, the latter had maintained a much steadier pace of growth over the last decade with its focus on low-skilled labour exports. So, it was inevitable for the economy of Bangladesh to catch up to India in per capita terms.

The IMF projections, however, need to be understood in greater detail to obtain a clearer picture. The issue centres around the IMF projections for GDP per capita in current prices for 2020, which stands at USD 1887.97 for Bangladesh and USD 1876.53 for India. The same projections for 2021 put India above Bangladesh again. The interesting thing to note is that India’s GDP per capita projections for 2019 stood at USD 2097.78 while for Bangladesh they stood at USD 1816.04. The COVID-19 blow to India has, thus, been quite significant but almost non-existent for its subcontinental neighbour. This difference is reflected in COVID-19 numbers as well. Currently, India has 5534 cases per million people as opposed to 2380 in Bangladesh. Economic arguments aside, India can draw lessons from Bangladesh on its relative resilience to the pandemic.

But coming back to the growth numbers, it must first be noted that GDP per capita in current prices is not the best metric for comparison between countries since it does not eliminate effects of inflation. A country with higher inflation might show higher GDP per capita in current prices even though the citizens in the country can buy a fewer basket of products with the same amount of money. Due to this reason, the GDP at constant prices based on purchasing power parity is a more reliable metric. As per IMF projections in the same database, India’s GDP per capita at constant prices stands at USD 5944.69 while for Bangladesh it stands at USD 4861.45. Thus, in real terms India still eclipses Bangladesh.

Nevertheless, these facts should not be grounds for complacency as there is a lot to learn from the Bangladesh growth story. India’s GDP per capita in real terms was 1.4 times that of Bangladesh in 2016 but has narrowed each year since then. As of 2020, the projections place the ratio at 1.2. Further, in overall GDP terms (at current prices), India’s economy was 14.8 times that of Bangladesh in 2010. As of 2020, the ratio has fallen to 8.15. Thus, the previous decade has been worrying for the Indian economy. Even if Bangladesh might not overtake India in real terms any time soon, significant learnings can be drawn from the country’s performance in recent years.

Bangladesh has followed the playbook adopted by the East Asian economies and China that led to their exceptional growth trajectories over the last five decades. It has leveraged upon its low-skilled labour force and developed an export competency on products like textiles, which are labour-intensive. Vietnam has also followed a similar strategy and along with Bangladesh are capturing a bulk of the industries that are exiting China. A major advantage of focussing on low-skilled labour for developing countries is that the labour-intensive employment absorbs a significant portion of the expanding workforce and reduces the dependency on agriculture.

India has taken a different path to growth. Instead of low-skilled manufacturing jobs, the services sector has become the country’s economic powerhouse due to its pool of English-speaking skilled workforce. In the process, India missed its bus on becoming a manufacturing-led economy. The downside of this path is that the services sector is not labour-intensive and, thus, fails to create jobs at a commensurate pace as people join the workforce in a developing economy. The result is unemployment and skill mismatch, which India is experiencing to a considerable extent. In a working paper by Prateek Kukreja, the 68th round of the NSS Employment and Unemployment Survey is used to show that the proportion of overeducated workers in jobs is drastically high in Indian manufacturing. In the textiles and clothes industry, this figure stood at 68 percent in 2011-12. This shows how the Indian labour force is grossly untapped and significant economic gains can be made through the appropriate and adequate job creation.

The recent economic performance of Bangladesh should be a wake-up call for India to focus on low-skill production. The need of the hour is to enable the creation of industries that provide mass employment. To do so, it is necessary for India to fire its manufacturing cylinder and only then can it outpace the growth of its peers in the neighbourhood and beyond.

The article was published with Economic Times on October 22, 2020.