A century in measuring social progress 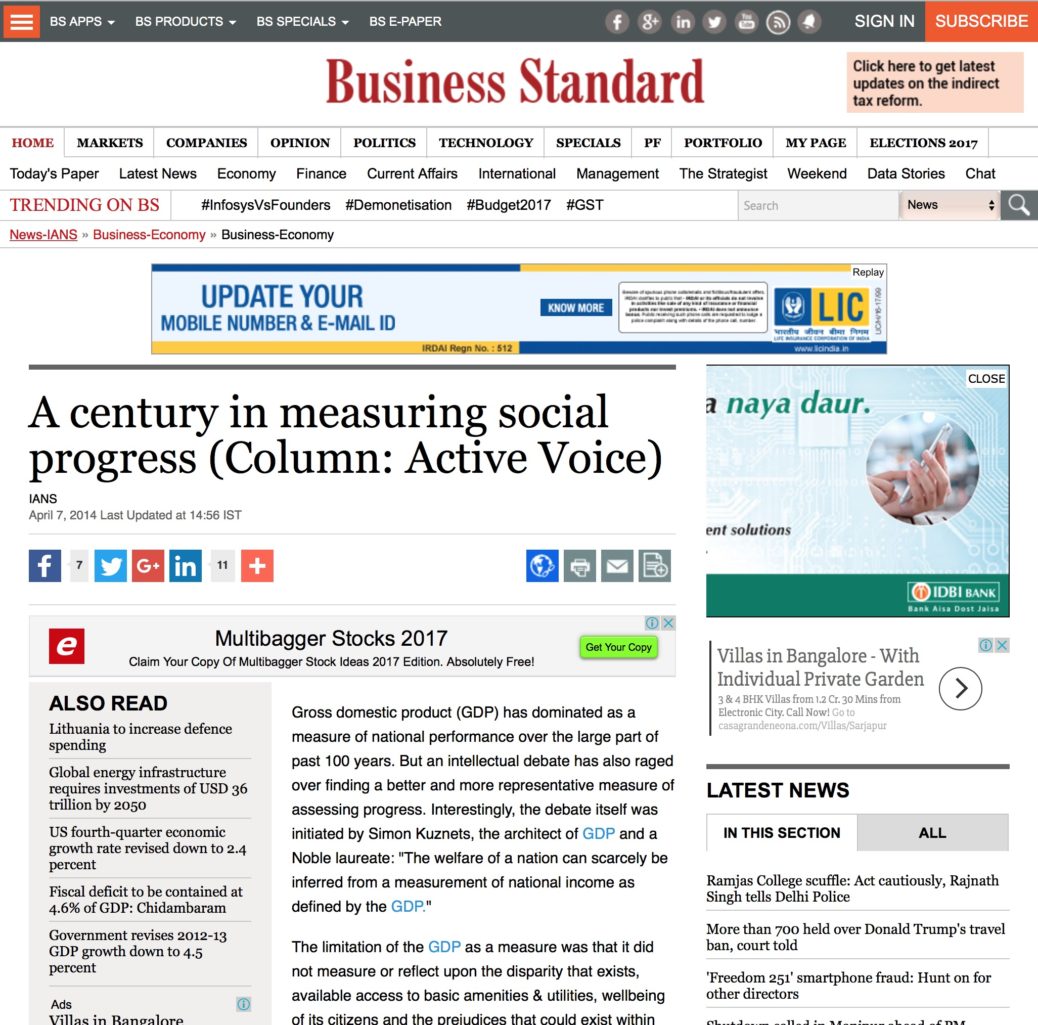 GDP has dominated as a measure of national performance over the large part of last hundred years though an intellectual debate has raged over finding a better and more representative measure of assessing progress. Interestingly the debate itself was initiated by Simon Kuznets, the architect of GDP and a Noble Laureate, who had said, “the welfare of a nation can scarcely be inferred from a measurement of national income as defined by the GDP”.

The limitation of the GDP as a measure was that it did not measure or reflect upon the disparity that exists, available access to basic amenities & utilities, wellbeing of its citizens, the prejudices that could exist within the society etc.

Overcoming these limitations a new index measuring outcomes of social progress has been developed titled Social Progress Index developed by Michael Porter of Harvard University, Scott Stern of Massachusetts Institute of Technology and Michael Greene of Social Progress Imperative. The index makes measuring social and environment performance integral to national performance measurement, moving beyond and complementing the traditional measure of GDP and GDP per capita. The underlying idea for the index is that it would provide economists unique ways to look at progress, help policy makers make better policy choices. The index is methodologically superior to many similar initiatives in the past like Human Development Index, OECD Better Life Index, Happy Planet Index etc. and looks at 54 indicators that get bracketed into basic human needs, foundations of wellbeing and opportunity.

The social progress index in its inaugural avatar looks at 132 countries across the world wherein they rank and bracket them into tiers. The most interesting aspect that gets ascertained or depicted through the index is that a definitive relationship exists between economic growth and well being however economic growth and performance alone does not fully explain social progress.

In light of this it becomes interesting to see the state of affairs in India wherein we have been brow beating our progress and growth over the last two decades. Shockingly (I would rather presume that a lot of us knew this though wouldn’t want to discuss) India gets ranked at 102 on the index and lower then its neighbors Bangladesh, Sri Lanka and Nepal. To put things in a better perspective should mention that India is the worst performing of the BRICS as well wherein Brazil is ranked 46, South Africa at 69, Russia at 80 and China at 90. The only saving graces as per our febrile imagination could be that Pakistan is ranked 124. This is where we need to sit back and appreciate that if ranking of Pakistan and its state of affairs is any indication than we are probably staring at a social disaster, which is just looming at the horizon.

If we dig deeper into the index we would find that India remarkably lacks in shelter, tolerance and inclusion relative to a peer group of 15 countries with similar GDP per capita. Going beyond the peer group we find that India performs dismally under various parameters as political terror (I would presume the terror bureaucracy unleashes on its citizens), sanitation facilities, water withdrawals, modern slavery, religious tolerance, community safety net and inequality in attainment of education.

The insights from the index gives a picture of stark and a dismal reality we in India face and clearly compels us to think that we as a nation are really in immediate need of getting our act together or an upheaval awaits us that could be disastrous for the largest democracies in the world.

To ascertain what ails India a deeper look at the level of states (provinces) would be required. As the report suggests economic progress is not equally distributed within countries and neither is social progress. The index would be extended to the sub-national level over a period of time wherein Institute for Competitiveness (India) plans to work on the same and get insights and see whether provinces with better performance in economic progress are those that have achieved higher levels of social progress. I would rather suspect that this would be true though this might as well be construed as a political statement supporting a certain model of growth on the day of the elections.