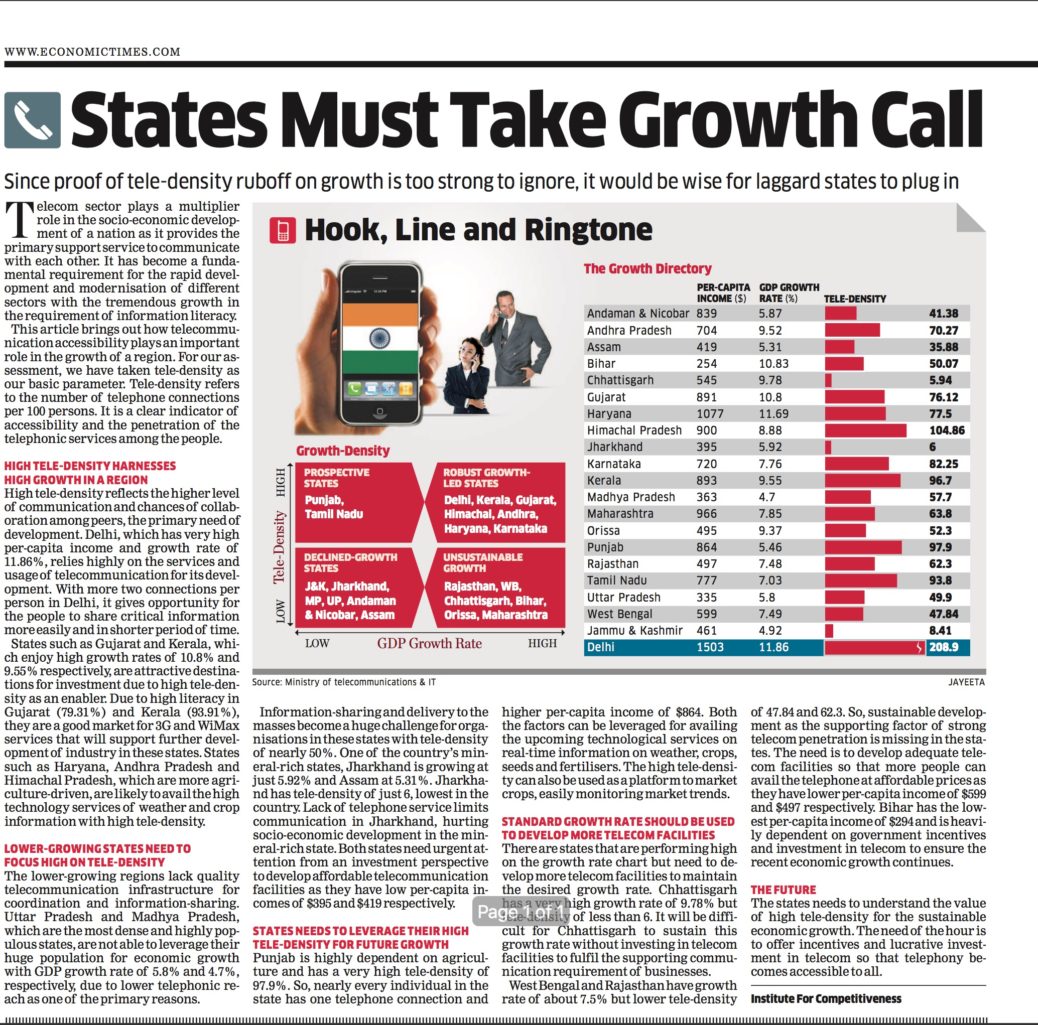 Telecom sector plays a multiplier role in the socio-economic development of a nation as it provides the primary support service to communicate with each other. It has become a fundamental requirement for the rapid development and modernisation of different sectors with the tremendous growth in the requirement of information literacy.

This article brings out how telecommunication accessibility plays an important role in the growth of a region. For our assessment, we have taken tele-density as our basic parameter. Tele-density refers to the number of telephone connections per 100 persons. It is a clear indicator of accessibility and the penetration of the telephonic services among the people.

High tele-density reflects the higher level of communication and chances of collaboration among peers, the primary need of development. Delhi, which has very high per-capita income and growth rate of 11.86%, relies highly on the services and usage of telecommunication for its development. With more two connections per person in Delhi, it gives opportunity for the people to share critical information more easily and in shorter period of time.

States such as Gujarat and Kerala, which enjoy high growth rates of 10.8% and 9.55% respectively, are attractive destinations for investment due to high tele-density as an enabler. Due to high literacy in Gujarat (79.31%) and Kerala (93.91%), they are a good market for 3G and WiMax services that will support further development of industry in these states. States such as Haryana, Andhra Pradesh and Himachal Pradesh, which are more agriculture-driven, are likely to avail the high technology services of weather and crop information with high tele-density.

The lower-growing regions lack quality telecommunication infrastructure for coordination and information-sharing. Uttar Pradesh and Madhya Pradesh, which are the most dense and highly populous states, are not able to leverage their huge population for economic growth with GDP growth rate of 5.8% and 4.7%, respectively, due to lower telephonic reach as one of the primary reasons.

Information-sharing and delivery to the masses become a huge challenge for organisations in these states with tele-density of nearly 50%. One of the country’s mineral-rich states, Jharkhand is growing at just 5.92% and Assam at 5.31%. Jharkhand has tele-density of just 6, lowest in the country. Lack of telephone service limits communication in Jharkhand, hurting socio-economic development in the mineral-rich state. Both states need urgent attention from an investment perspective to develop affordable telecommunication facilities as they have low per-capita incomes of $395 and $419 respectively.

States needs to leverage their high tele-density for future growth

Punjab is highly dependent on agriculture and has a very high tele-density of 97.9%. So, nearly every individual in the state has one telephone connection and higher per-capita income of $864. Both the factors can be leveraged for availing the upcoming technological services on real-time information on weather, crops, seeds and fertilisers. The high tele-density can also be used as a platform to market crops, easily monitoring market trends.

West Bengal and Rajasthan have growth rate of about 7.5% but lower tele-density of 47.84 and 62.3. So, sustainable development as the supporting factor of strong telecom penetration is missing in the states. The need is to develop adequate telecom facilities so that more people can avail the telephone at affordable prices as they have lower per-capita income of $599 and $497 respectively. Bihar has the lowest per-capita income of $294 and is heavily dependent on government incentives and investment in telecom to ensure the recent economic growth continues.

The states needs to understand the value of high tele-density for the sustainable economic growth. The need of the hour is to offer incentives and lucrative investment in telecom so that telephony becomes accessible to all.

The Article was published with Economic Times on April 30th, 2011.