Rocky ride for the economy in 2017 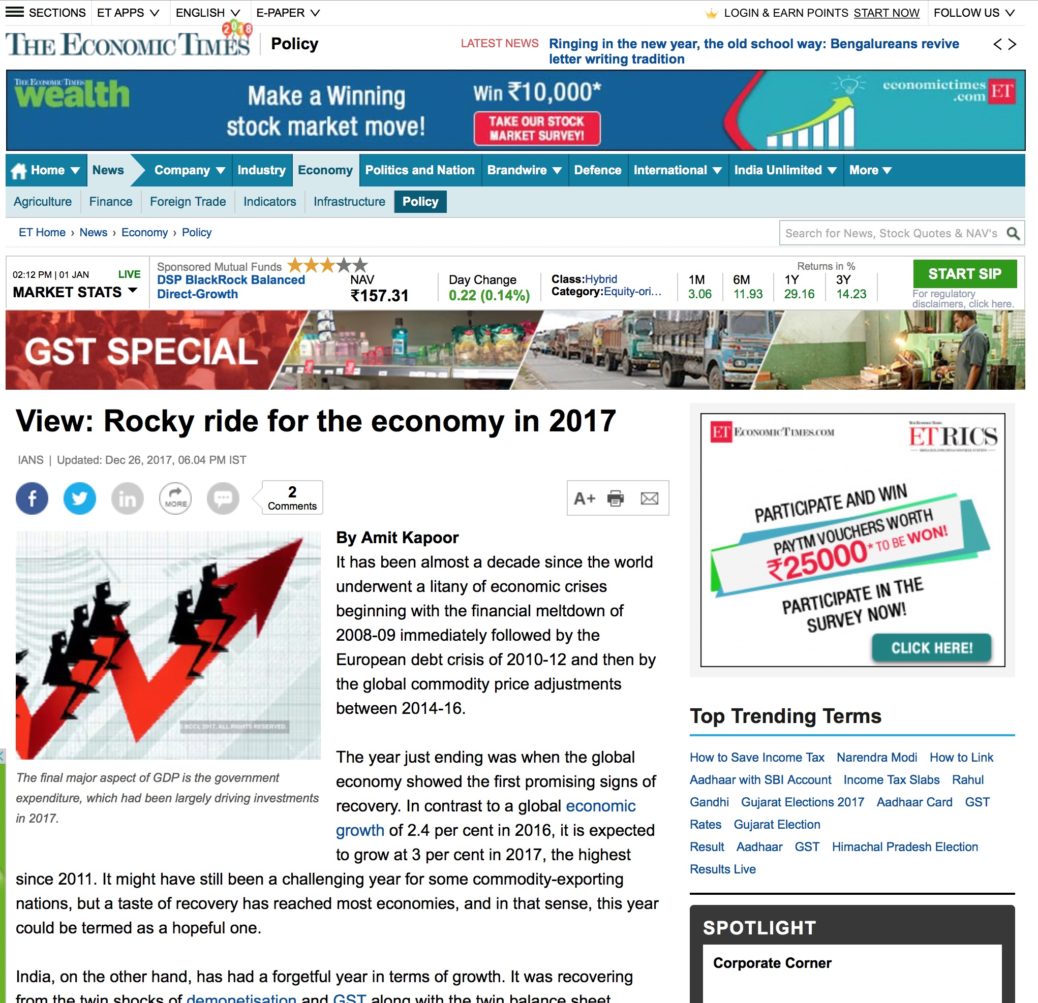 Rocky ride for the economy in 2017

It has been almost a decade since the world underwent a litany of economic crises beginning with the financial crisis of 2008-09, immediately followed by the European debt crisis of 2010-12 and then by the global commodity price adjustments between 2014-16. 2017 was the first year when the global economy showed the first promising signs of recovery. In contrast to a global economic growth of 2.4 percent in 2016, it is expected to grow at 3 percent in 2017, the highest since 2011. It might have still been a challenging year for some commodity-exporting nations, but a taste of recovery has reached most economies, and in that sense, this year could be termed as a hopeful one.

India, on the other hand, has had a forgetful year in terms of growth. It was recovering from the twin shocks of demonetisation and GST along with the twin balance sheet problem of banks and corporates. Due to these issues, GDP growth for the economy fell consistently until it reached a 3-year low of 5.7 percent in the April-July quarter before recovering to 6.3 percent in the July-September quarter. By all means, growth in the current financial year will not exceed 7 percent.

The economic performance of the country has been concerning throughout the year at all levels. First, consumption, which is the largest component of the Indian economy, now accounts for only 54 percent of India’s GDP as compared to 59 percent in December 2016. Consumption growth fell for three consecutive quarters in the calendar year from a high of 11.1 percent to 6.5 percent. Demand for consumer durables seems to have been the most affected. IIP (Index of Industrial Production) growth for consumer durables fell to a low of negative 1.8 percent by September 2017 as compared to 5.9 percent a year ago. Both demonetisation and GST have contributed to these subdued consumption trends. Considering that consumption is the primary driver of growth for the Indian economy, reviving it should be the foremost matter of concern stepping into 2018.

Second, investments have also taken a hit this year owing to the twin balance sheet problem. Banks have become wary of lending due to a rising proportion of bad loans on their balance sheets while, on the other end, corporates with overleveraged balance sheets are postponing any borrowing for later. Investment activity has been affected at both ends. Gross fixed capital formation, which measures the level of investment in the economy, has been plunging.

It had reached heights of 38 percent a decade ago in 2007 and remained above 35 percent till 2011, which is the level it needs to maintain a minimum growth rate of 7 percent. However, it has fallen to an average of 29 percent in 2017. The credit growth to the industry has fallen to negative levels underlining the gravity of the situation. The recent bank recapitalisation plan to the tune of Rs. 2.11 trillion will help, but the process will be completed only by 2019. Therefore, additional measures need to be taken to revive investment activity in the short-term.

The final major aspect of GDP is the government expenditure, which had been largely driving investments in 2017. The government spending averaged 18 percent in the first three quarters of the calendar year 2017 as compared to 12 percent during the same period last year. However, even this has fallen to a lowly 4.1 percent in the July-September quarter. The drastic reduction was imminent due to the tight fiscal situation that the government finds itself in after having incurred 98 percent of the budgeted expenditure for the financial year in October itself.

Moreover, to make matters worse tax revenue collection has witnessed a slowdown. Tax revenue receipts were 48 percent of the budgeted estimates during April-October 2017 as compared to 51 percent a year ago. The recent reduction in GST rates will only widen the shortfall and make the fiscal situation even more challenging. The inflation readings are not promising either. Despite RBI’s best efforts to control inflation within its medium-term target of 4 percent, it hit a 15-month high of 4.33 percent in November. If the Central government exceeds the fiscal deficit targets for the year, it will spark higher inflationary trends.

2018 is going to be a challenging year considering these aspects. Subdued consumption levels, low investment activity and constrained government spending leave no scope for complacency. Boosting exports aided by a favourable global environment can help, but only to an extent. Also, the external sector will be largely dependent on how the oil prices move during the year. A slight indication of unrest in the Middle East can push prices upwards and escalate India’s import bill.

Therefore, since investments are tied up with the problem of bad loans and government spending is constrained by fiscal limitations, a lot will depend on whether the government can revive the consumption pattern of Indians. Hopefully, now that the effects of demonetisation and GST have worn off and GST rates have been slashed, household spending will see an uptick.

The article was published with Economic Times and Millennium Post on December 26, 2017.