Opinions aren’t dangerous in a democracy 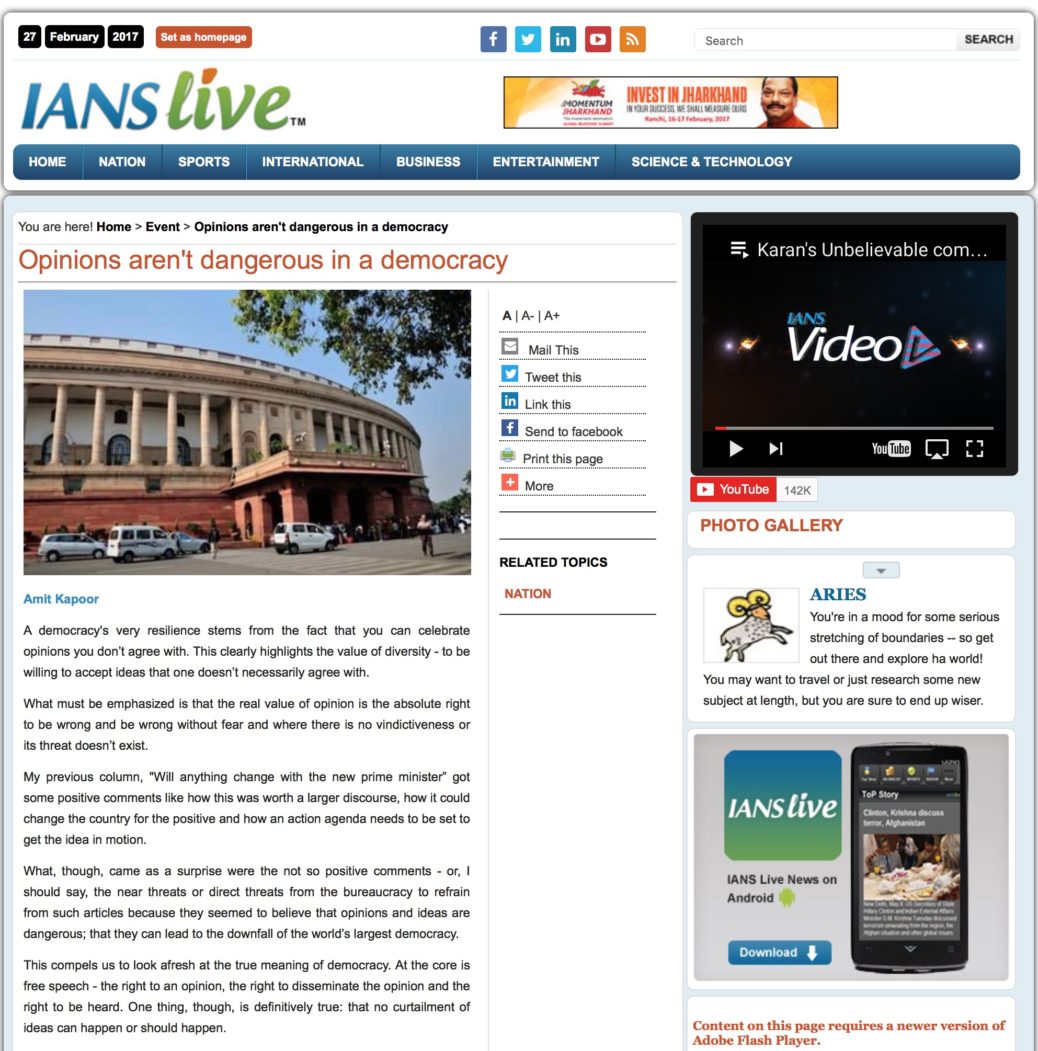 The last piece under this column titled “Will Anything Change with New Prime Minister?” got some real positive comments like how the idea is worth a larger discourse, how this can change our country for the positive and how an action agenda needs to be set to get the idea in motion. What though surprised me were the not so positive comments, oops, I should say near threats or direct threats from the bureaucracy to refrain from writing such pieces because they seem to believe that opinions and ideas are dangerous that can lead to the downfall of the world’s largest democracy.

This compels us to look at the meaning of democracy and that is “government by the people; a form of government in which the supreme power is vested in the people and exercised directly by them or by their elected agents under a free electoral system”. Additionally as per Oxford Dictionary it means “a system of government by the whole population or all the eligible members of a state, typically through elected representatives: a system of parliamentary democracy”.

The above definitions, if clearly seen, describe the value of democracy and this is about free speech, have a right to an opinion, right to disseminate the opinion, right to be heard etc. One thing though is definitively true and it is that no curtailment of ideas can happen or should happen. The thought must be emphasized that the real value of opinion is the absolute right to be wrong and be wrong without fear and where vindictiveness is not happening or the threat of such vindictiveness doesn’t exist.

The very resilience in a democracy comes from the fact that you can celebrate opinions that you don’t agree with. This highlights clearly the value of diversity, wherein we have to be willing to accept ideas that we don’t necessarily agree with. Quite remarkably we don’t have to agree with each other’s ideas, thoughts, writing, etc. though we should be fighting unto the end of time to protect the right to say, suggest, criticize and debate. Thus, we can clearly state that the entrenched power of democracy is its free speech and the ability of the people to self-correct whenever and wherever required.

At times I wonder that we proudly suggest that we are the world’s largest democracy, with the largest number of people currently voting, but the amount of restrictions (implicit or explicit) and straightjacketing is so difficult to fathom and understand. I am cringing at the fact that can we have freedom of speech when you have so many restrictions?

I am seemingly facing so many restrictions from a section of bureaucracy that they are trying to curtail my right to free speech and beat me down. This is where I would like to clearly ask a few questions –

My own case is trivial and is used only as an example.  But, it represents countless others whose voices are silenced or never even whispered because of fear of bureaucratic reprisals. We need to go beyond this thinking of curtailment of ideas, understand and appreciate that the only way we could solve big and difficult problems in India would be driven by having misfits and rebels in the system, debate their ideas, and carry the best of those forward.  How on earth can we imagine that we would have solutions when we push these people down and not appreciate their point of view?

Ideas being freely given seem to be seen as threatening in the febrile imagination of some bureaucrats as if those ideas could affect the foundations of government.  This is exceedingly short sighted.

They can threaten me, intimidate me, take away my position, demean me, hurt me professionally, or hit my credibility but they (the bureaucracy) cannot take away my ability to opine and contribute. It makes the understanding stronger that it is them (bureaucracy) who are a threat to this country, not an ordinary citizen who opines his ideas to take the country forward.

The views expressed are personal and inspired by interactions with Kevin Stolarick, research director, Martin Prosperity Institute, Rotman School of Management, Canada, who is an American citizen. Amit Kapoor can reached at amit.kapoor@competitiveness.in and tweets @kautiliya)