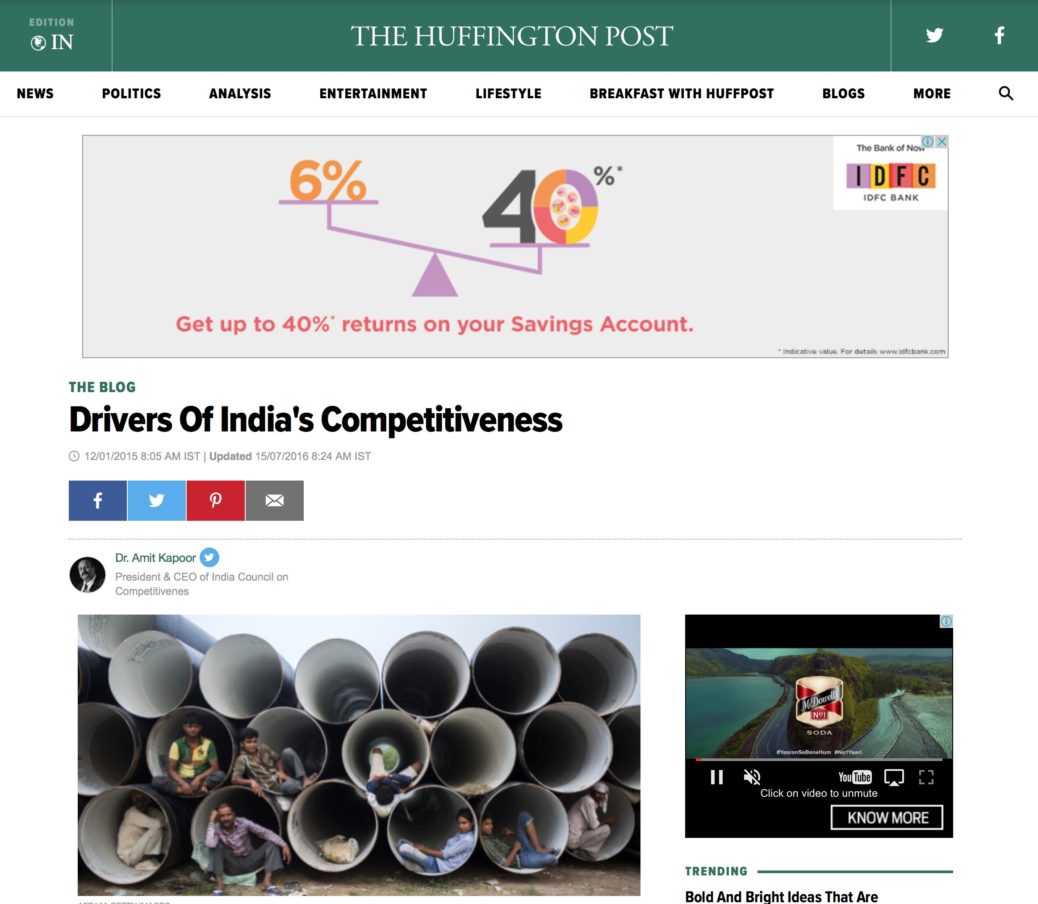 As 2015 brings in new personal resolutions for people, it ushers in new hope and fresh activity. Everyone is eager to know what the year holds for India and what would be the government’s future course of action. With the scrapping of the Planning Commission and the replacement of the same by Niti Aayog the journey ahead seems to be taking a market-oriented route to economic development. The success of this course or the lack thereof is dependent on future implementation, but an in-depth analysis of the Indian economy at present is certainly welcome. This piece looks at some of the key drivers of growth and competitiveness in the Indian context. Some of the ideas discussed find mention in the India Competitiveness Report of the Institute for Competitiveness, India.

A combination of external and internal factors had caused a considerable decline in productivity but a steady revival is now being seen. Internally, some initiatives by the current government such as the much-awaited Goods and Services Tax (GST) and “Make in India” campaigns are seen as significant efforts aimed at increasing future growth and prosperity. External factors include a massive fall in commodity prices most importantly oil prices in the past six months. It is seen to be a positive outcome for India with the country still being dependent on oil imports for fueling its growing energy demand. As India progresses towards the future, following are the key economic drivers that could strengthen the rise in its competitiveness and are in sync with the actions currently being taken by the government.

Economists have acknowledged the utilisation of unique capabilities and resources to attain growth. India not only has a diverse culture but also has a plethora of resources that vary across states and can be utilized to develop a unique economic strategy for its varied regions. It also calls for an effective implementation and the growth in infrastructure at lower levels of states and cities to attain the goal. The need is to work on a developmental plan at different levels of geography. Quite clearly, a vision needs to be developed for the distinct cities and states to tap the real potential of the country.

Service sector continues to spearhead financial growth in the country relative to the other sectors, and agricultural sector continues to provide high employment. The looming red flag is still the manufacturing sector, and it’s underperformance since long. While campaigns such as ‘Make in India’ have been set in place to improve its contribution, it is also necessary to strengthen the existing manufacturing organisations and make them competitive. It can be done by utilising technology, unlocking the creative energies of their employees, investing in research & development, etc. Within the manufacturing domain, it would also be helpful if all the stakeholders identify the specific sectors to focus on.

There have been numerous campaigns and policies that have been initiated to drive the success of Indian economy and increase prosperity. While the efforts are welcome, it would be futile if these are not accompanied by suitable changes in the bureaucracy and the way in which the society functions. India’s extremely low rankings on theGlobal Corruption Perception Index is highly disconcerting and continues to have a detrimental domino effect on the country’s growth and competitiveness. Stronger efforts need to be made to eradicate this social illness from the country. In the developing countries, corruption is often caused by the redundant allocation of resources and lack of transparency often becomes a confrontational point between people and governments. The Indian Government needs to remove these ‘confrontational bottlenecks’ and put mechanisms in place that improve the ease of doing business. The removal of archaic laws is also seen as a positive development for the economy and society.

The intellectual capital of the workforce and youth in the country plays a significant role in the sustainable growth of its economy. The new IP Policy could be a step in the right direction to encourage greater investor confidence and capital inflows. India still stands lower than other nations in terms of efforts and investments made towards developing research and innovation in the country. For instance, the number of patents filed by the country is barely noticeable in comparison to advanced countries such as US and Japan. Innovation will enable both the creation of next-gen entrepreneurs and reaching the ideal production efficiency in different sectors. Ineffective measures to encourage the same would lead to stagnant and unsustainable growth in the economy. This reiterates that India needs to drive entrepreneurship, firm formation, etc. while developing the infrastructure required to support the same.

Sectors like infrastructure and transportation are essential for the progress of the economy. Finding additional opportunities within these areas to increase competitive edge would be crucial for determining growth in the short-and long-run. Again, while opportunities are being assessed from the macroeconomic point of view, it will be very interesting to see how the policy makers address various risks involved due to geographical, social or other external reasons. These include overpopulation, poverty, and dependence on other countries for resources amongst others. The reliance on technology for increasing productivity and efficiency will also be essential in determining the future of different sectors of the economy and the Indian economy as whole.

Thus, even though the current outlook of India economy is positive, if the underlying structural issues are not addressed, it could be detrimental to aspirations of the people of India.