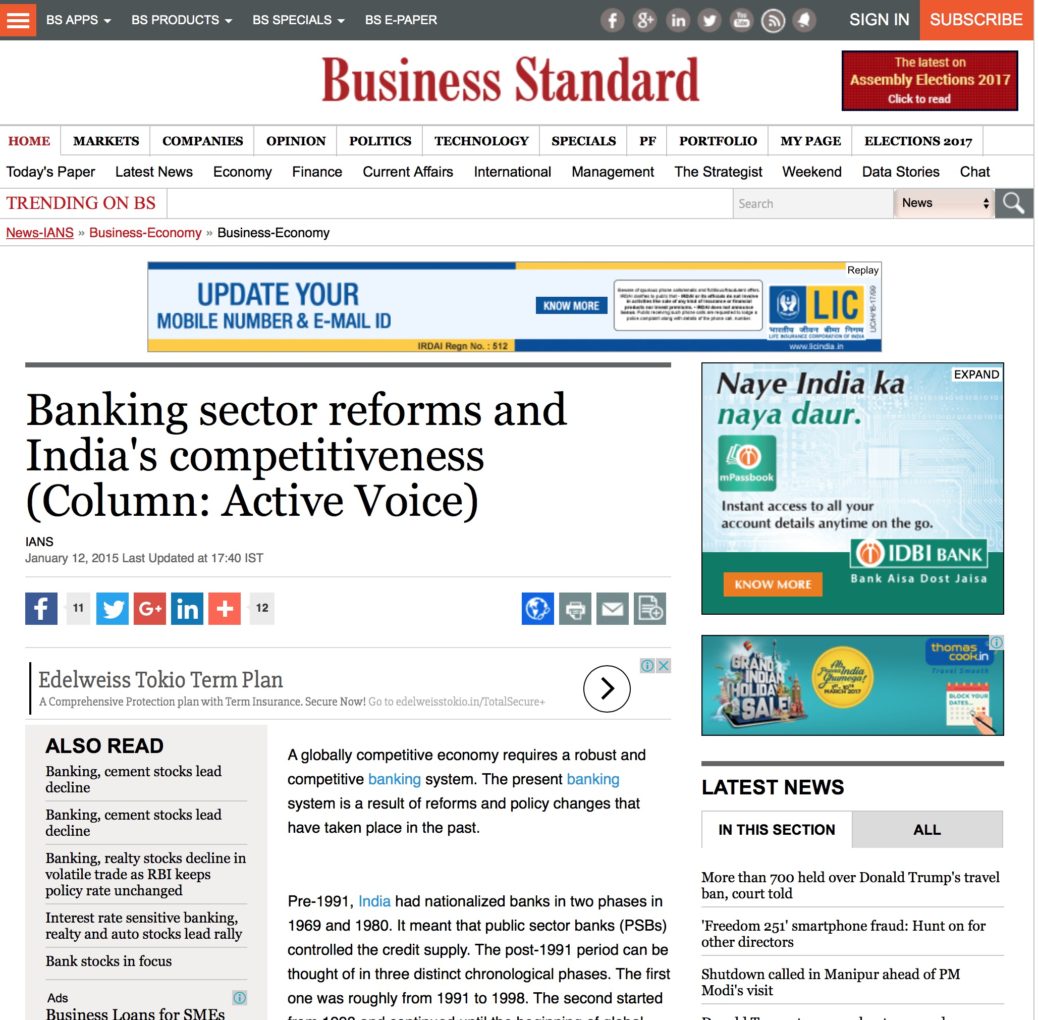 Pre-1991, India had nationalized banks in two phases in 1969 and 1980. It meant that public sector banks (PSBs) controlled the credit supply. The post-1991 period can be thought of in three distinct chronological phases. The first one was roughly from 1991 to 1998. The second started from 1998 and continued until the beginning of global financial crisis. The third we believe is an ongoing process.

Post-1991 saw structural reforms in the financial sector (banking, capital markets and development finance institutions) based on the recommendations of the Narasimham Committee report of November 1991. Within the banking system, significant issues had arisen – namely a small capital base, overall fragile health, low profitability and less competition in the banking sector as a whole.

Measures to strengthen the capital base included capital infusion by the government of approximately Rs.20,000 Crore. In addition, public sector banks were allowed to approach the capital markets for infusion of equity capital subject to the condition that government ownership would remain at least at 51 percent.

Measures to improve the fragile health and low profitability included adhering to internationally acceptable prudential norms, asset classification and provisioning and capital adequacy. Several measures were also initiated, the prominent being the enactment of The Recovery of Debts Due to Banks and Financial Institutions Act in 1993. Following this, 29 debt recovery tribunals (DRTs) and five debt recovery appellate tribunals (DRATs) were established at a number of places in the country.

Apart from this, Lok Adalats were increasingly used for settling disputes between banks and small borrowers. Also, credit data started to be shared between banks for guarding against defaulters. Also, NPAs were clearly defined – based on objective criteria in four heath codes from the earlier eight. The new health codes resulted in approximately one-fourth of the total advances made being declared as NPAs.

All these measures reduced the percentage of NPAs to gross advances from 23.2 percent in March 1993 to 16 percent in March 1998. Further rationalization and deregulation of interest rates was also undertaken. The effective resolution of the NPA issue, combined with the deregulation of interest rates paved the way for greater competition and better profitability.

Simultaneously, to create competition within the banking sphere, several measures were undertaken. These included the opening of private sector banks, greater freedom to open branches and installation of ATMs, and a full operational freedom to banks to assess working capital requirements.

The second phase of reforms started with another Narasimham Committee report in April 1998, which succeeded the East Asian Crisis. Post 1998, a need was felt to restructure debt as the DRTs process was painfully slow due to legal and other hurdles. Therefore, a need to felt to build asset reconstruction companies. The enactment of the Securitisation and Reconstruction of Financial Assets and Enforcement of Security Interest (SARFAESI) Act, 2002 enabled the sale of financial assets to securitisation/ reconstruction companies.

Another feature of the second stage of reforms was the increasing competition between banks. Though 21 new banks (four in the private sector, one in the public sector and 16 foreign entities) entered, the overall scheduled commercial banks (SCB) reduced approximately four-fifths to 82 by 2007. Additionally, FDI in the banking sector was brought under the automatic route, and the limit in private sector banks was raised from 49 percent to 74 percent in 2004.

The third phase post the global financial crisis has again seen the NPAs steadily rising again. Data from the recently released Financial Stability Report of the RBI shows this increased to 4.5 per cent in September 2014. What is remarkable is that stressed advances (the NPA and Restructured Standard Advances) were at 12.9 percent of their total advances in September 2014 for PSBs in comparison to private sector banks at 4.4 percent.

Commenting on these developments Prime Minister Narendra Modi told a recent meeting of public sector bankers that he is against political interference but supports political intervention. Finance Minister Arun Jaitley similarly stressed the need to “deal with commercial issues with a commercial mindset”. Reserve Bank of India Governor Raghuram Rajan similarly hailed the government’s decision in letting the PSBs be without fear or favour and ignore extraneous considerations in their commercial operations.

While all these statements highlight a firm intent to help public sector banks regain their competitiveness, it is equally worthwhile to observe that our financial system in the past has had higher levels of stressed assets, particularly in phase I and in the early part of phase II. That does not mean we have to touch those levels again. Maybe another round of reforms for the banking sector will reduce them. In 2015, the single biggest question facing the banking sector in general and the PSBs in particular will be ensuring reduction in NPAs with greater financial inclusion.

Published with Business Standard on January 12, 2015.