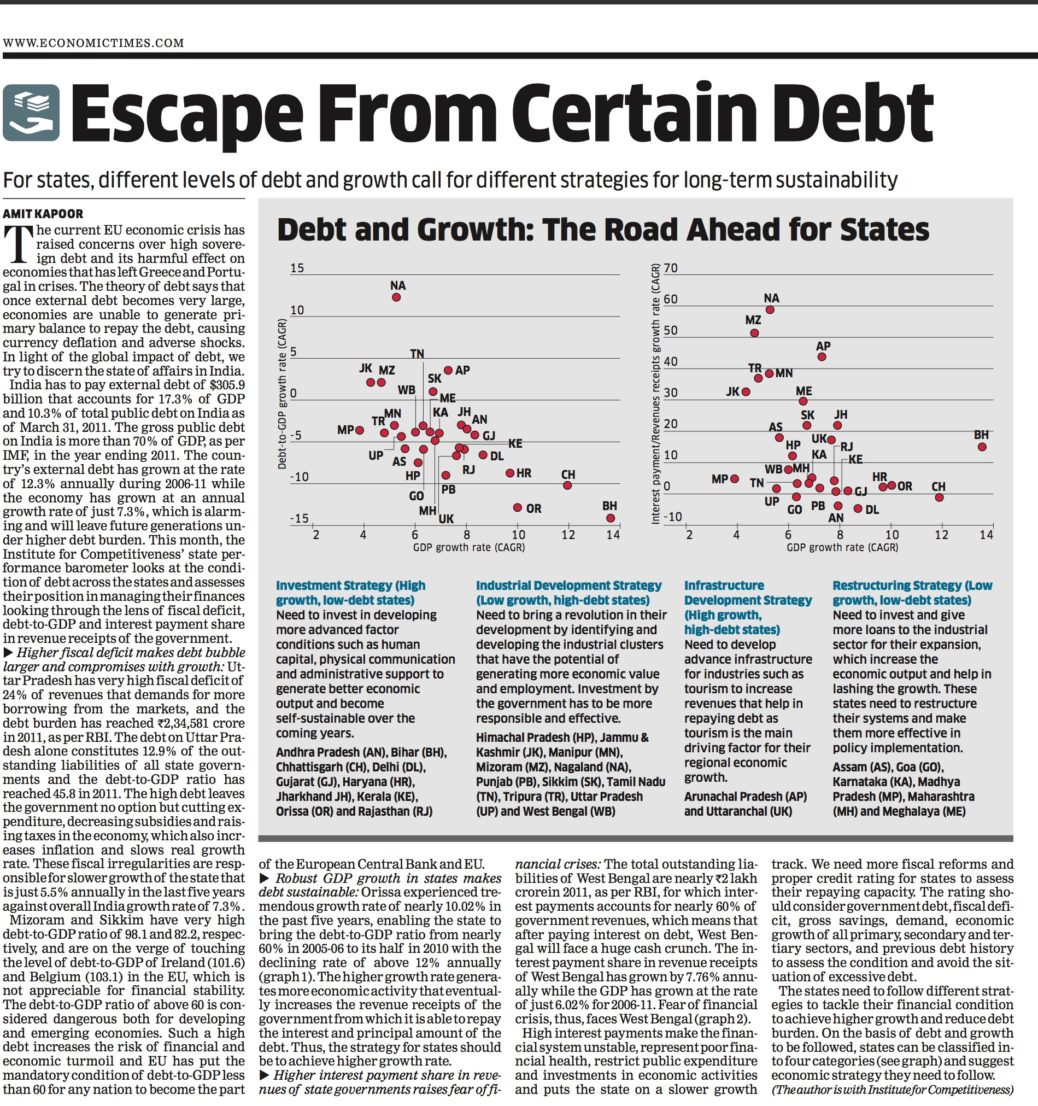 The current EU economic crisis has raised concerns over high sovere- ign debt and its harmful effect on economies that has left Greece and Portu- gal in crises. The theory of debt says that once external debt becomes very large, economies are unable to generate pri- mary balance to repay the debt, causing currency deflation and adverse shocks. In light of the global impact of debt, we try to discern the state of affairs in India.

India has to pay external debt of $305.9 billion that accounts for 17.3% of GDP and 10.3% of total public debt on India as of March 31, 2011. The gross public debt on India is more than 70% of GDP, as per IMF, in the year ending 2011. The coun- try’s external debt has grown at the rate of 12.3% annually during 2006-11 while the economy has grown at an annual growth rate of just 7.3%, which is alarm- ing and will leave future generations un- der higher debt burden. This month, the Institute for Competitiveness’ state per- formance barometer looks at the condi- tionof debtacrossthestatesandassesses their position in managing their finances looking through the lens of fiscal deficit, debt-to-GDP and interest payment share in revenue receipts of the government. Higher fiscal deficit makes debt bubble larger and compromises with growth: Ut- tar Pradesh has very high fiscal deficit of 24% of revenues that demands for more borrowing from the markets, and the debt burden has reached `. 2,34,581 crore in 2011, as per RBI. The debt on Uttar Pra- desh alone constitutes 12.9% of the out- standing liabilities of all state govern- ments and the debt-to-GDP ratio has reached 45.8 in 2011. The high debt leaves the government no option but cutting ex- penditure, decreasing subsidies and rais- ing taxes in the economy, which also incr- eases inflation and slows real growth rate. These fiscal irregularities are resp- onsible for slower growth of the state that is just 5.5% annually in the last five years against overall India growth rate of 7.3%.

Mizoram and Sikkim have very high debt-to-GDP ratio of 98.1 and 82.2, respec- tively, and are on the verge of touching the level of debt-to-GDP of Ireland (101.6) and Belgium (103.1) in the EU, which is not appreciable for financial stability. The debt-to-GDP ratio of above 60 is con- sidered dangerous both for developing and emerging economies. Such a high debt increases the risk of financial and economic turmoil and EU has put the mandatory condition of debt-to-GDP less than 60 for any nation to become the part of the European Central Bank and EU.

Robust GDP growth in states makes debt sustainable: Orissa experienced tre- mendous growth rate of nearly 10.02% in the past five years, enabling the state to bring the debt-to-GDP ratio from nearly 60% in 2005-06 to its half in 2010 with the declining rate of above 12% annually (graph 1). The higher growth rate genera- tes more economic activity that eventual- ly increases the revenue receipts of the government from which it is able to repay the interest and principal amount of the debt. Thus, the strategy for states should be to achieve higher growth rate.

Higher interest payment share in reve- nues of state governments raises fear of fi- nancial crises: The total outstanding lia- bilities of West Bengal are nearly `. 2 lakh crorein 2011, as per RBI, for which inter- est payments accounts for nearly 60% of government revenues, which means that after paying interest on debt, West Ben- gal will face a huge cash crunch. The in- terest payment share in revenue receipts of West Bengal has grown by 7.76% annu- ally while the GDP has grown at the rate of just 6.02% for 2006-11. Fear of financial crisis, thus, faces West Bengal (graph 2).

The states need to follow different strat- egies to tackle their financial condition to achieve higher growth and reduce debt burden. On the basis of debt and growth to be followed, states can be classified in- to four categories (see graph) and suggest economic strategy they need to follow.

The article was published in Economic Times on July 30, 2011.