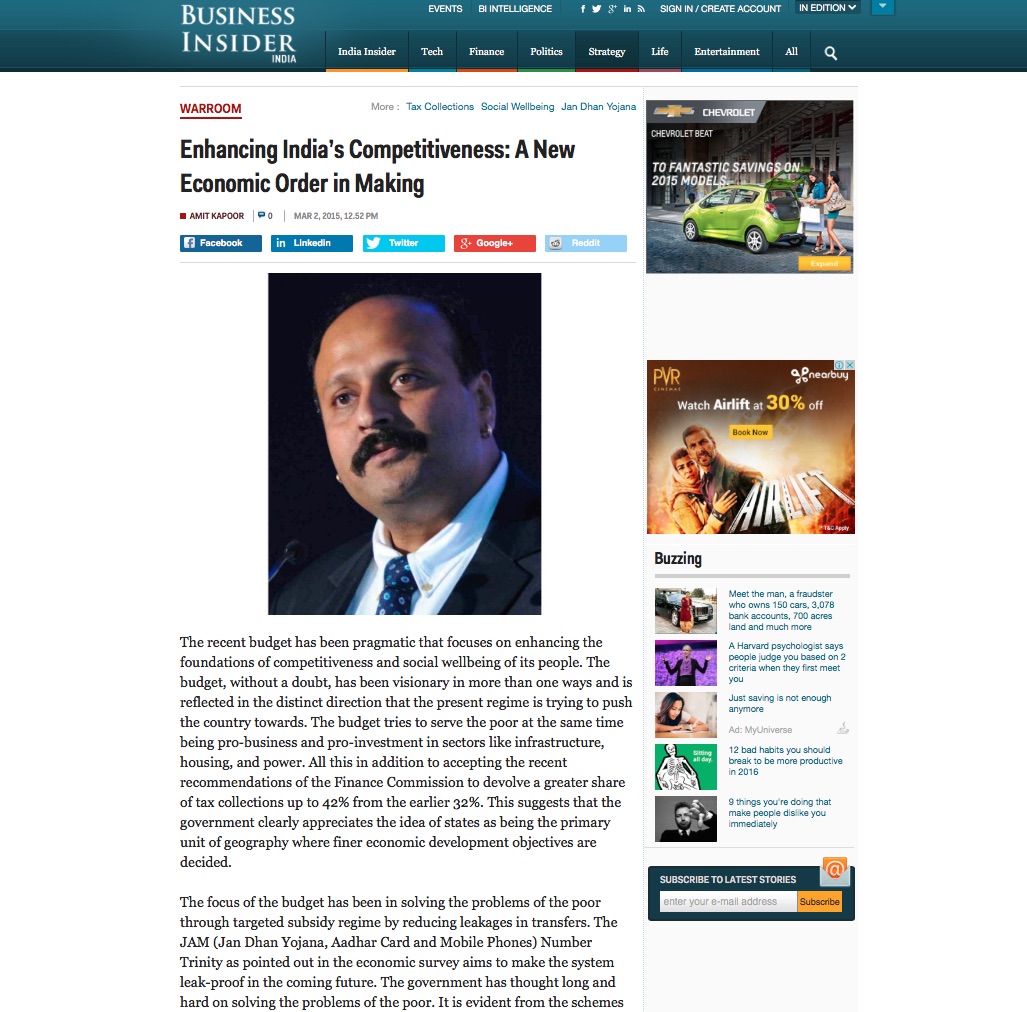 The recent budget has been pragmatic that focuses on enhancing the foundations of competitiveness and social wellbeing of its people. The budget, without a doubt, has been visionary in more than one ways and is reflected in the distinct direction that the present regime is trying to push the country towards. The budget tries to serve the poor at the same time being pro-business and pro-investment in sectors like infrastructure, housing, and power. All this in addition to accepting the recent recommendations of the Finance Commission to devolve a greater share of tax collections up to 42% from the earlier 32%. This suggests that the government clearly appreciates the idea of states as being the primary unit of geography where finer economic development objectives are decided.

The focus of the budget has been in solving the problems of the poor through targeted subsidy regime by reducing leakages in transfers. The JAM (Jan Dhan Yojana, Aadhar Card and Mobile Phones) Number Trinity as pointed out in the economic survey aims to make the system leak-proof in the coming future. The government has thought long and hard on solving the problems of the poor. It is evident from the schemes meant for the people at various stages that do not have medical or general insurance. The old age pension scheme and the way the other insurance schemes have been designed with benefits to poorest of the poor in times of need in the form of accident premiums at amounts as small as Rs 330 a year, etc. with a coverage of Rs 2 Lakh point towards the same.

Implicit in the design of such schemes is the fact that the government seems to opt for market-based solutions to take care of problems of the people rather than a governmental welfare driven model. It was also evident by the announcement to create a National Skills Mission through the Skill Development and Entrepreneurship Ministry that aims to make the workforce employable and stay employable. A look at the provisions also suggests that the government is keen to invest in startups as well as in promoting small businesses by providing funds for entrepreneurship. The opening up a Micro Units Development Refinance Agency (MUDRA) Bank, with a corpus of Rs. 20,000 Crore also bolsters this point. There also seems to be an explicit understanding that India of tomorrow will have to be driven by entrepreneurs and a shift in the mindset is required from being job seekers to job creators. The education system also gets a boost, but opening up newer institutions especially IIM’s and IIT’s makes the education system focus on quantity but not quality. This is where the task of the HRD Ministry would be cut out to focus on IIT’s/ IIM’s as a pillar in the ecosystem of creating enterprises.

For the corporate sector and investor community, this is probably the first time that the focus has been on providing internationally competitive tax rates (though deferred over the next four years). Similarly, the indication on a timely implementation of the much-awaited goods and services tax (to be implemented from next year) indicates that the government is keen towards its aim of a common unified market that will integrate the economy and boost growth and enhance regional competitiveness. The focus on reducing red tape by focusing on simplifying norms for opening and complying with rules also indicates the government is keen on improving India’s rank on indices such as the Global Competitiveness Index and the Ease of Doing Business Index by leveraging technology to solve problems.

The greater devolution to states also means that now the union government is trying to go on the path of cooperative federalism that had been talked about for long. It means states will now have greater freedom to design policies and implement programs suitable to the needs of the people residing therein. The only two caveats i.e., first the states being unable to implement policies and secondly the deepening wedge and greater regional disparity due to better performance of some states. This is where the states will have to understand the competitive federalism and take it in a healthy spirit. The Institute for Competitiveness’s annual State Competitiveness Index ranking may be of benefit for states to see their performance and improve it over time.

The budget thus manages to do well for quality of life of citizens, as well as social progress especially for the common people. It signals a departure from the past with a new economic order in place one that has at its core a focus on states, infrastructure, entrepreneurship, competition and access to markets as the prime drivers of tomorrow’s India. Will the budget have a transformational impact on India’s future? It certainly has the potential; The rest will depend on India’s implementational capability.

Published with Business Insider on March 2, 2015.