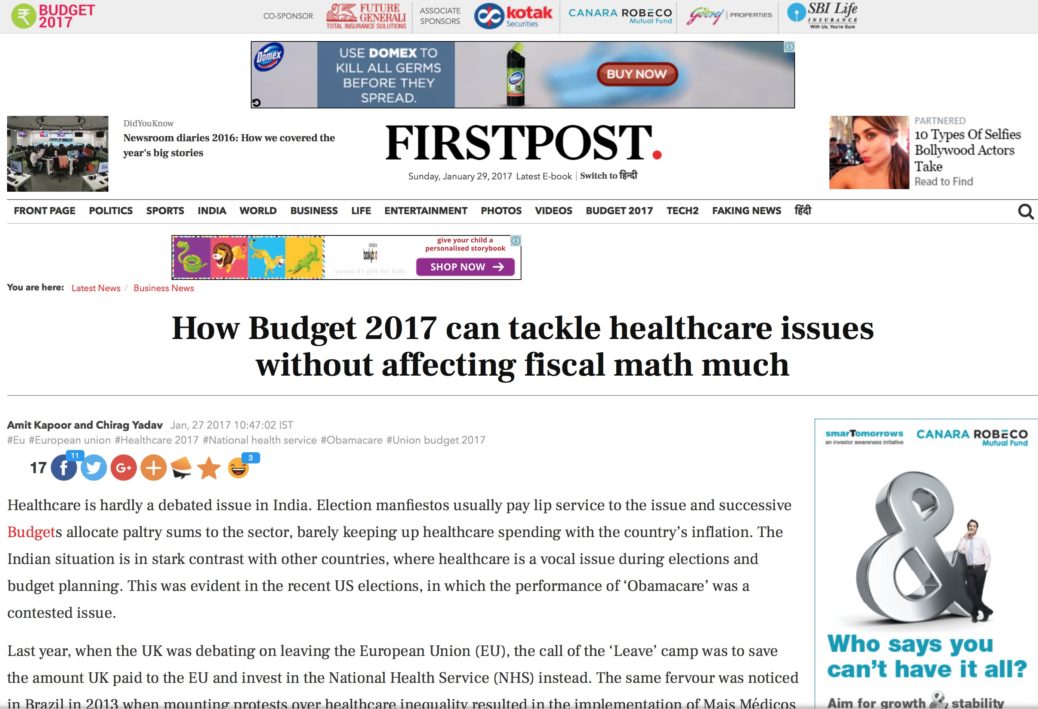 Healthcare is hardly a debated issue in India. Election manifestos usually pay lip service to the issue and successive Budgets allocate paltry sums to the sector, barely keeping up healthcare spending with the country’s inflation. The Indian situation is in stark contrast with other countries, where healthcare is a vocal issue during elections and budget planning. This was evident in the recent US elections, in which the performance of ‘Obamacare’ was a contested issue.

Last year, when the UK was debating on leaving the European Union (EU), the call of the ‘Leave’ camp was to save the amount UK paid to the EU and invest in the National Health Service (NHS) instead. The same fervour was noticed in Brazil in 2013 when mounting protests over healthcare inequality resulted in the implementation of Mais Médicos program by the Dilma Rouseff government. The programme gained widespread appreciation from the international community and the United Nations. India needs to shake off its apathy towards the issue of healthcare and devote more resources to the betterment of health provisioning in the country.

The previous Budget saw some positive progress on that front. The government increased allocation for healthcare by 17 percent to provide health insurance of up to ₹1 lakh per family and to set up 3,000 new generic medicine stores – Jan Aushadhi Stores (JAS) – across the country during 2016-17 to tackle the shortage of drugs. Although these were laudable steps to enhance affordability and accessibility of healthcare in India, progress on the ground has been slow though the year. The JAS website claims that only 164 stores have been opened across the country.

Nevertheless, the increase in healthcare expenditure in the previous budget was a welcome step since India spends just over 1 percent of its GDP on healthcare, which is abysmally low by international standards. By comparison, China and Brazil spend almost 9 percent of their GDP on healthcare. However, India’s healthcare system also suffers from a plethora of issues that need actions that go beyond merely increasing spending. It is also the composition of spending that matters a great deal. In light of the upcoming Budget, it is crucial to identify the issues that ail the sector so that the appropriate course of action can be taken to provide effective healthcare services.

The first issue that needs redressal is bringing the focus back on traditional public health services. These are activities that involve heavy state intervention like sanitation, immunisation, and addressing nutritional deficiency among children. Angus Deaton, a Nobel Prize-winning economist, notes that public health measures have carried enormous importance in bringing down child mortality and improving life expectancy in advanced economies and these require concerted action by public authorities.

Surprisingly, India allocates less than 10 percent of its health expenditure to these services. Vijay Joshi, an Oxford economist, interestingly points out that the situation was better in colonial India when there were separate civil service cadres for public health and for medical services. By the time India got independence, advance economies had already achieved high standards of public health and shifted their focus to curative medicine. India prematurely followed their model and diverted funds from public health into medical services. The upcoming Budget can remedy these historical policy errors and gain higher health dividends just by better targeting of funds.

Second, India suffers from a unique problem of having some of the best quaternary and tertiary care in the world along with a system of primary care that is in shambles. For instance, according to rural health statistics, in 2015 there was a shortfall of 22 percent and 32 percent in Public Health Centres (PHCs) and Community Health Centres (CHCs) respectively. In the existing PHCs and CHCs, there is an added shortfall of doctors and health workers. Further, Abhijit Banerjee and Esther Duflo show that as the existing PFCs and CHCs are “closed more than half the times”, people prefer visiting private doctors. Their surveys show that around 75 percent of primary care is provided by private practitioners.

The problems arise due to a lack of accountability of public services providers and there is no easy way to solve it. So, instead of incurring higher expenditure on improving public services in primary care, the government should divert resources towards improving the quality of private provisioning of such services, which is already high in proportion. Since years of attempting to avoid government failures have paid no dividends, the best the government can do is to reduce market failures.

The first step could be towards provision of training courses for the multitude of unqualified private doctors that provide primary care throughout the country and making such certification mandatory. Secondly, private practitioners should be incentivised to provide services in rural areas by complementing their wages on a capitation basis along with tax incentives and rebates. These measures are urgently required since a better provisioning of healthcare services at the primary level can also reduce the dependence on secondary and tertiary level through early detection of diseases.

Finally, it is to be noted that health is a state subject. Moreover, since the recommendations of the Fourteenth Finance Commission have been implemented, states have been getting a higher share of central taxes. So, the States are more empowered than the Centre to act on the subject of healthcare. However, the Centre can encourage competition among states by linking the funds allocated towards healthcare with incremental health performances of the states. The benefits from such a move are two-sided. Encouraging competition on health outcomes will tackle the issue of quality that is the Achilles heel of Indian healthcare system. Secondly, states are better informed about the health situation in their locale and the specific areas that need redressal. Therefore, putting the onus of healthcare on the states will bring about faster improvement in the country’s health performance.

Even though India is in dire need of higher investment in healthcare, there is also a need of better targeting of funds. As discussed, higher policy focus towards provision of public health services, incentivising quality private provisioning of primary healthcare, and more involvement of states in improving healthcare services is the need of the hour. The upcoming Budget can easily address these issues and have a wider impact on healthcare outcomes of the country than any populist scheme. These measures can also be taken without adding significantly to the fiscal deficit, which will be tight this year, considering the budgetary allocations the government has to make to prop up the economy that is expected to grow slowly in the near future. Hopefully, the Budget will move beyond considering healthcare as a short-term cost rather than a long-term investment in the country’s human capital.

The article was published with First Post on January 27, 2017.