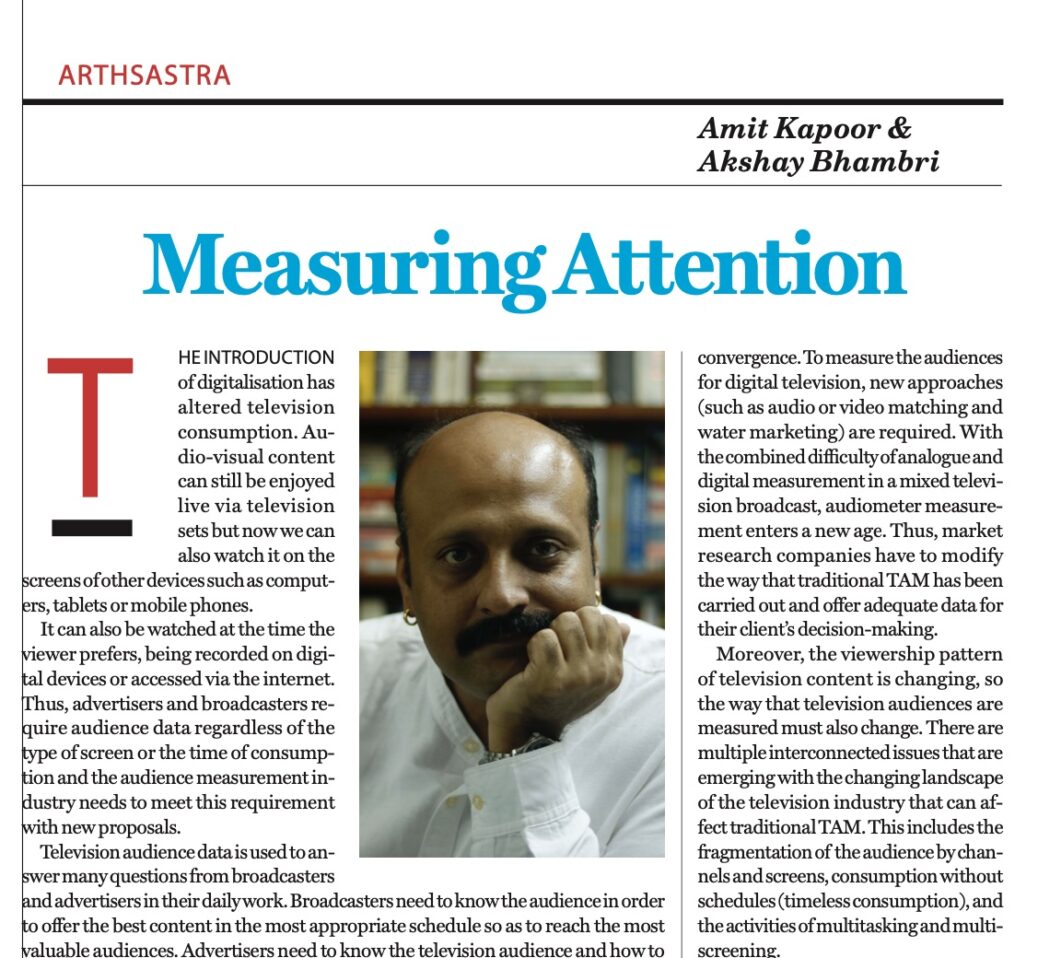 One of the most highlighted concerns regarding the television measurement rating is the inability of the rating system to capture the changing dynamics of the television industry itself.

The introduction of digitalisation has altered television consumption. Audio-visual content can still be enjoyed live via television sets but now we can also watch it on the screens of other devices such as computers, tablets or mobile phones. It can also be watched at the time the viewer prefers, being recorded on digital devices or accessed via the internet. Thus, advertisers and broadcasters require audience data regardless of the type of screen or the time of consumption and the audience measurement industry needs to meet this requirement with new proposals.

Although this audience data can help in many media decisions, its main benefit is that it facilitates the buying and selling of advertising in commercial media markets. It sets prices so it serves as currency for the advertising market. Therefore, offering reliable audience data is fundamental for the commercial television market.

Television audience data has been provided by important research companies as syndicated research, as a ‘standardised product that is sold to multiple subscribers’. The system used is frequently based on people meters. These devices record who is watching and what they are watching and offer both demographic and channel information. Globally television audience measurement (TAM) is carried out either by big enterprises such as Nielsen in the USA, TNS (Kantar Media) in Denmark, Kazakhstan, South Africa, Turkey etc., and organisations such as OzTAM in Australia, and BARB in the UK.

The process of measuring television audience has been complicated by the global rollout of digital terrestrial television (DTT). The accurate characterisation of viewing behaviours faces methodological hurdles in a multi-signal environment with the advent of new contents and directly in front of the contemporary technological convergence. To measure the audiences for digital television, new approaches (such as audio or video matching and water marketing) are required. With the combined difficulty of analogue and digital measurement in a mixed television broadcast, audiometer measurement enters a new age. Thus, market research companies have to modify the way that traditional TAM has been carried out and offer adequate data for their client’s decision-making.

Moreover, the viewership pattern of television content is changing, so the way that television audiences are measured must also change. There are multiple interconnected issues that are emerging with the changing landscape of the television industry that can affect traditional TAM. This includes the fragmentation of the audience by channels and screens, consumption without schedules (timeless consumption), and the activities of multitasking and multi-screening.

Another source of difficulty comes from the audience that will be measured, because their habits and behaviour regarding the consumption of media – and particularly television – have changed significantly in recent years. People have learned that the contents can be watched in a deferred way through the use of OTT and other digital platforms. In addition to this, the consumption of television is not performed exclusively through the TV screen. Mobile devices along with greater use of the internet as a communication channel, are transformed into points of access to television content.

In addition, audiences have not only been divided into ever smaller groups, by a wider range of channels available, with profiles and content offers attractive to rather more limited groups; they have also been fragmented by a relevant increase of devices to consume television (cross-platform consumption), as is prevalent. Audiences have increased in size, depending on the increase in the number of available media and channels through which its contents are broadcasted. At the same time, they have increasingly diversified between different alternative media, in the function of their multiplication, fragmenting themselves.

Nearly in all countries, television audience measurement is done by installing television measurement devices in panels of carefully recruited sample households. However, there is no universal standardised sample size that is used for television audience measurement. Instead, there is a great deal of variation visible in terms of household sample size. For instance, in the USA measuring meters are installed in 25,000 households in comparison to 5,300 households in the UK. In India, the number of households for measurement is kept around 45,000 which is greater than both the USA and the UK. However, every sample household represents a population of 30,666 in India. Whereas, every sample household represents the population of 10,280 in Australia, 12,679 in the UK, 13,180 in the USA, and 13,412 in France. Therefore, India needs to nearly triple the current sample size to be able to match the global standard of sample representation.

Furthermore, even though the television measurement data in India is released every Thursday, concerns regarding the robustness of the rating and methodology are raised by multiple sections of media and civil society. Some of the key concerns raised by the stakeholders include the use of various distribution tactics, including landing pages, to jack up ratings. Although television channels buying landing pages was termed legal by TDSAT in 2019, the issue pertaining to whether landing page data should be counted in viewership data or not and whether the impact of the landing page is still visible in news channel ratings,  is still a point of contestation which should be addressed immediately.

Furthermore, one of the most highlighted concerns regarding the television measurement rating is the inability of the rating system to capture the changing dynamics of the television industry itself. For instance, in the USA and the UK, the measurement is done through the installation of measurement devices with TV as well as installation of measurement tools in all the other devices such as laptops, tablets and mobile phones to capture the viewership of television through alternative ways. However, the Indian television rating system only measures viewership through TV. Thus, it provides an incomplete picture to advertisers as well as broadcasters.

Therefore, there is an urgent need for reforms in the television audience measurement systems to be able to tackle the emerging issues in the age of digitalisation. Measuring the audience is something extremely important in understanding how media systems and individuals behave. Hence, finding the best data for better decisions should be the principal condition of any proposed reforms and research technique.

The article was published with Business World on August 3, 2022.