Impact of recent regulatory move on Make in India 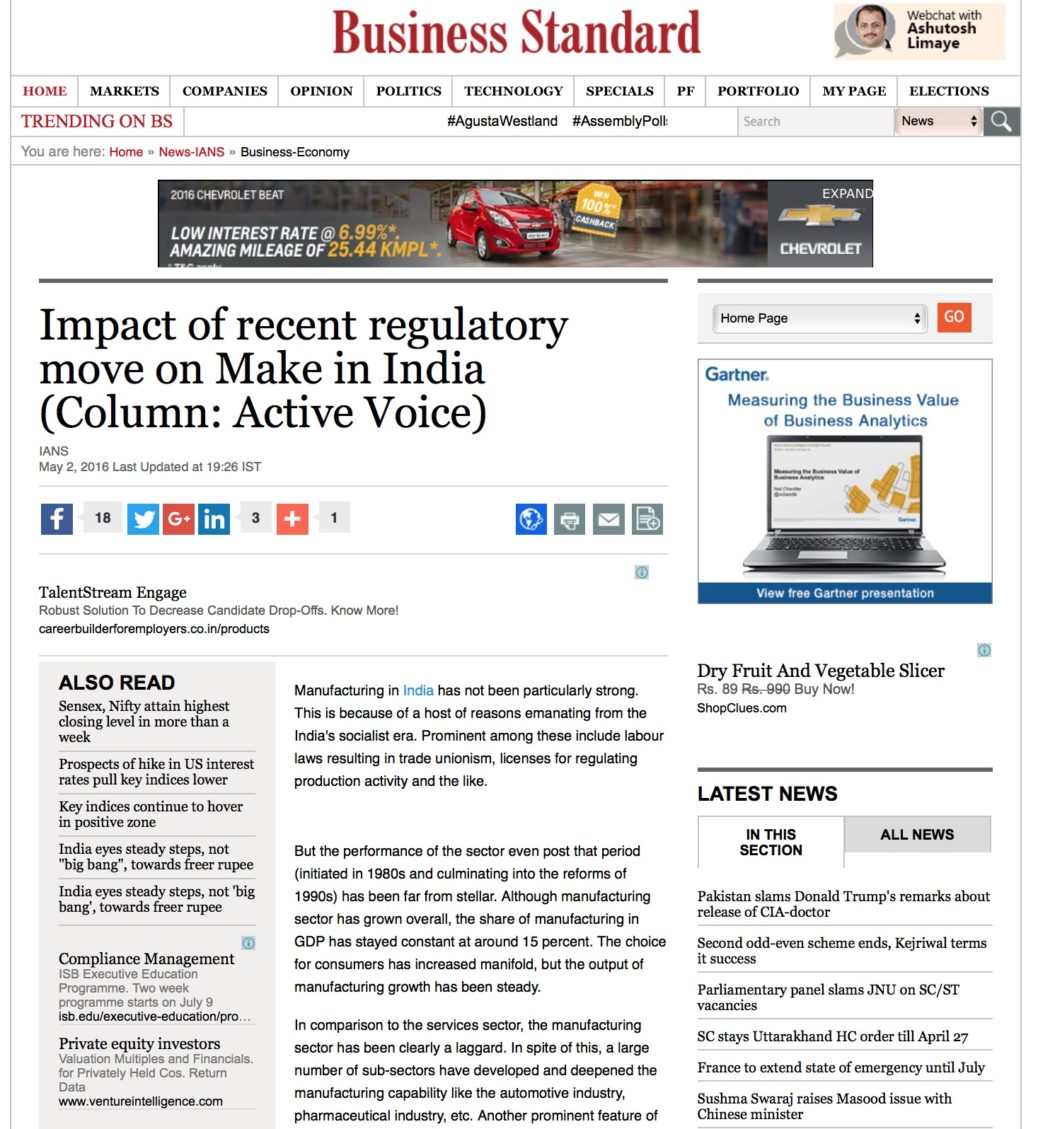 Manufacturing in India has not been particularly strong. This is because of a host of reasons emanating from the India’s socialist era. Prominent among these include labour laws resulting in trade unionism, licenses for regulating production activity and the like.

But the performance of the sector even post that period (initiated in 1980s and culminating into the reforms of 1990s) has been far from stellar. Although manufacturing sector has grown overall, the share of manufacturing in GDP has stayed constant at around 15 percent. The choice for consumers has increased manifold, but the output of manufacturing growth has been steady.

In comparison to the services sector, the manufacturing sector has been clearly a laggard. In spite of this, a large number of sub-sectors have developed and deepened the manufacturing capability like the automotive industry, pharmaceutical industry, etc. Another prominent feature of Indian manufacturing is that still a massive portion is done by the small and medium sector enterprises.

It is in this light of this context and backdrop that the recent move by the Department of Industrial Policy and Promotion (DIPP) (which awaits final approval of the finance minister) becomes important. The move does away with the 30 percent sourcing requirement for Apple, the Cupertino based technology giant. The sourcing requirement mandates that in single brand retail 30 percent of content is to be sourced locally. The apparent logic being given by the Indian government is that it can grant companies an exception if they are found to make state-of-the-art and cutting-edge products.

Apple till date has not been able to enter India, but most likely sees India as a key market as it has a low smartphone penetration (<20 percent) and shipped roughly 1.9 million devices to India in 2015. Also, in the years ahead, India is slated to be one of the biggest markets for smartphones. Till date, resellers were selling Apple products in India. This could change if the move sees the finance minister’s approval.

There are three important issues surrounding the move. First, it tries to rectify a policy problem with a specific move. The question now is how is the decision on cutting edge products being made. Apple is into electronic consumer durables like phones and laptops. It does not appear cutting edge. If a change has to be made the change should happen at the FDI policy level.

Also, it will be very difficult to reject applications by players like Xiaomi, the Chinese smartphone manufacturer, as its products use similar technology. In a competitive market this could very easily spell doom for incumbent Indian companies like Micromax, who had not faced massive international competition till date. This brings us to the related issue of the impact of the move.

Second, the move is slated to impact different stakeholders differently. For the consumers choice and service is going to increase and most likely the prices are going to get streamlined with international prices of Apple products. This may be seen as beneficial impact of Apple’s entry for consumers.

However, with regard to key programs like ‘Make in India’ the move could have a ‘no effect to a negative effect’ unless Apple also invests in manufacturing. The move does provide Apple with access to Indian market but does not provide Indian industry especially MSME’s with much scope for capacity building. It is because the cluster of ancillary firms which could supply parts to Apple by local production and manufacturing will not take place now. In addition if Xiaomi also enters India chances of incumbent firms facing stiffer competition may be bad from ‘Make in India’ point of view.

Third, the move does not help the cause of making India a hub of ESDM sector. This is because it just makes India a market but not a production destination. Ideally, Apple should make a commitment to invest in India as costs are low with respect to labour (even though Apple’s business is not very labour intensive and it outsources most of its production).

The capacity building effort in India can also help Apple immensely as India is a diverse nation and can throw up unique insights into operating in emerging markets. The FM must look into all the details of what went into the move by DIPP before signing the document. Also, it seems like it is time for review of sourcing requirements if they are indeed coming in the way of progress in the present policy context.

Published with Business Standard on May 2, 2016.