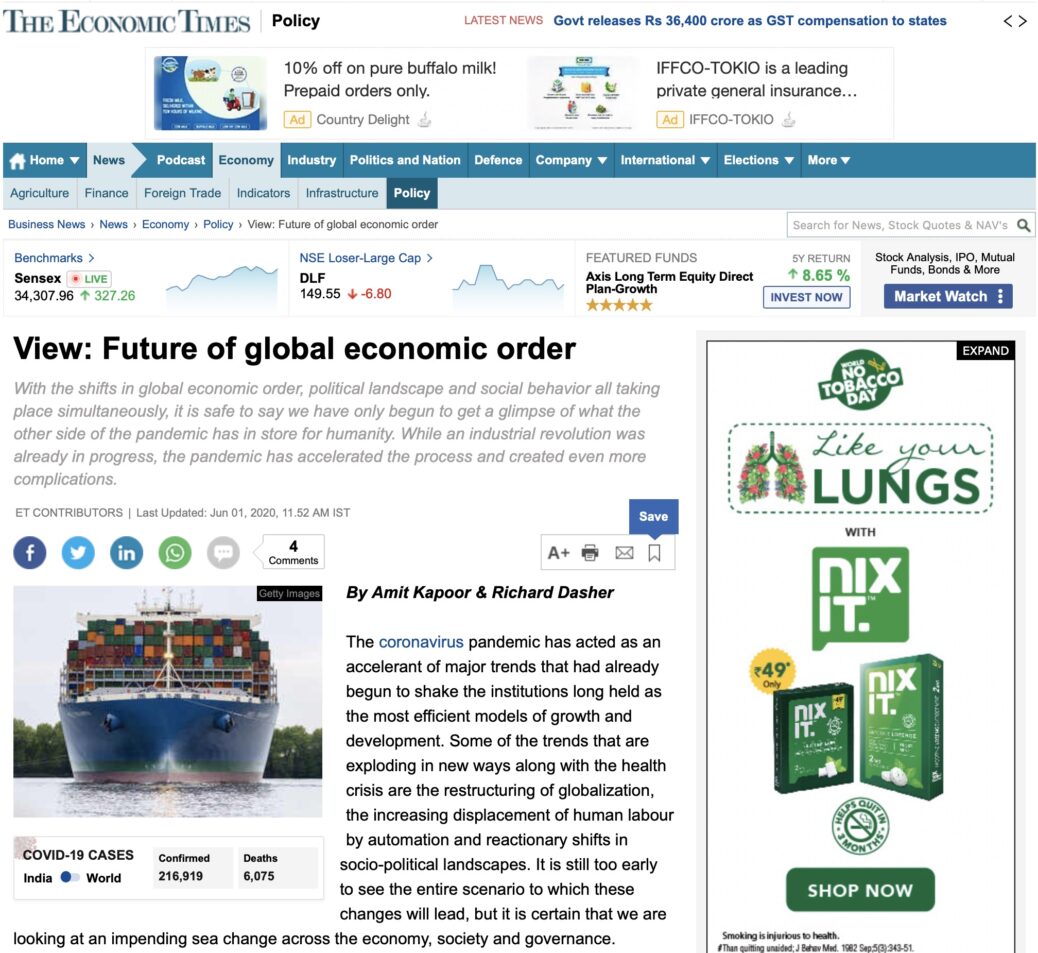 With the shifts in global economic order, political landscape and social behavior all taking place simultaneously, it is safe to say we have only begun to get a glimpse of what the other side of the pandemic has in store for humanity. While an industrial revolution was already in progress, the pandemic has accelerated the process and created even more complications.

The coronavirus pandemic has acted as an accelerant of major trends that had already begun to shake the institutions long held as the most efficient models of growth and development. Some of the trends that are exploding in new ways along with the health crisis are the restructuring of globalization, the increasing displacement of human labor by automation and reactionary shifts in socio-political landscapes. It is still too early to see the entire scenario to which these changes will lead, but it is certain that we are looking at an impending sea change across the economy, society and governance.

The pandemic has scored direct hits on the global value chains that have been at the core of world economic growth for over a generation. Although the standard view is that globalization is efficient and especially beneficial to developing countries, in recent years that view had already been challenged by old-style arguments about balance of trade and economic nationalism. The pandemic has provided an existential threat to these factors of globalization. The effects of the shutdown of production in China’s factories reverberated across international business even before the disease reached other parts of the world.

Along with disrupting international value chains, the pandemic has reinforced anti-immigrant populist discourses that were perennially rising up against globalization. Even if the global economy does not fragment into complete isolationism, it will certainly undergo a restructuring with greater emphasis on building resilience.  Over the long term, one expects increases in the reshoring of production and also greater attention to risk-hedging in decisions about the locations of international supply chain partners.

Moreover, the coronavirus is presenting greater incentives for industries to harness innovation to reduce their external dependencies. Automation has long been driven by impressive technology development and cost reduction.  It may actually slow during 2020 as a result of a shortage of funds for capital investment, but the need to maintain greater social distancing in physical facilities and the pressure to reduce labor resources that are at risk of disease will lead to more robotic process automation (RPA) in functions such as customer service, as well as in manufacturing.  Automation may also reduce cost differences between domestic and foreign operations and so allow businesses to reduce their international exposure. The pandemic is causing us to cross the Rubicon to a world in which digital technologies are at the core of almost all economic activities and relationships.

On account of its pervasive effects on society, the digital transformation of industry was already being called a new Industrial Revolution.  Unfortunately, like all revolutions, this industrial revolution is generating both winners and losers.  Economic transformations of such magnitude usher in structural changes that different segments of society do not adjust to at the same pace. As with the spread of mechanization in the 18th century and the advent of mass manufacturing in the 19th Century, the spread of digital technologies from the late 20th Century to the present time has augmented productivity and the  wealth-creating capacity of industries, but the transition has been as detrimental to some as it is gainful for others. For example, while these revolutions created new jobs, they also resulted in huge job losses. All in all, industrial revolutions tend to exacerbate the inequalities between the rich and poor, even as they are beneficial to the economy on the whole.

The larger picture is that we are beginning to see a new economic order for the future.  The resulting economic model will inarguably be heavily data-driven, with digital data pervading every aspect of society. Digital business and physical business are becoming too intertwined to separate from each other. Thanks to the cloud, datafication has already been growing at an exponential rate. This expansion of basic human activity to include both a digital and a physical world has opened up unprecedented possibilities with regards to market competition, global supply chains, international cooperation, human capital, governance, education, and more.  But, the current interconnected nature of the digital and physical economy is also a major reason that the coronavirus has had a worldwide impact with unprecedented speed.

The coming future will also be negatively tainted by the impact of coronavirus on lifestyles. The health crisis has presented itself as an opportunity for repressive states to tighten their hold on power on the pretext of curbing the spread of the disease. Populist leaders have turned Covid-19 into a discourse on protectionism and immigration. Accordingly, the world is now facing an unavoidable choice between bearing the economic sacrifices of adjusting to new conditions for the common good (in terms of health, economy, and political systems) or abandoning the generations of effort and resources invested in the current order, which is being made into a scapegoat of many world problems. It is still too early to see whether citizens will become disillusioned with the populist discourse or buy into it even more.

Similarly, it is still too early to see just how the digital and physical world will interface in the new economic order.  The pandemic provides much new information, but it is still an incomplete laboratory for studying consumer behavior. A persisting fear of the coronavirus appears to be shaping consumer behavior in the short term, as people prefer digital transactions and avoid travel, eating out and similar activities. Will this fear have a lasting impact on leading consumers to spend more on physical products than experiences? Will it also change the concept of what is an essential good or service? How will health consciousness inform consumption patterns in the future? The answers to such questions are difficult to find through rational theories, when the current situation is anything but normal.

With the shifts in global economic order, political landscape and social behavior all taking place simultaneously, it is safe to say we have only begun to get a glimpse of what the other side of the pandemic has in store for humanity. While an industrial revolution was already in progress, the pandemic has accelerated the process and created even more complications for which the economic institutions and policymakers are not yet prepared.  Nevertheless, the changes so far indicate that flexibility and resilience will be key words throughout the crisis and also in the economic order to come.

The article was published with Economic Times on June 1, 2020.