The age of awakening: The story of the Indian economy 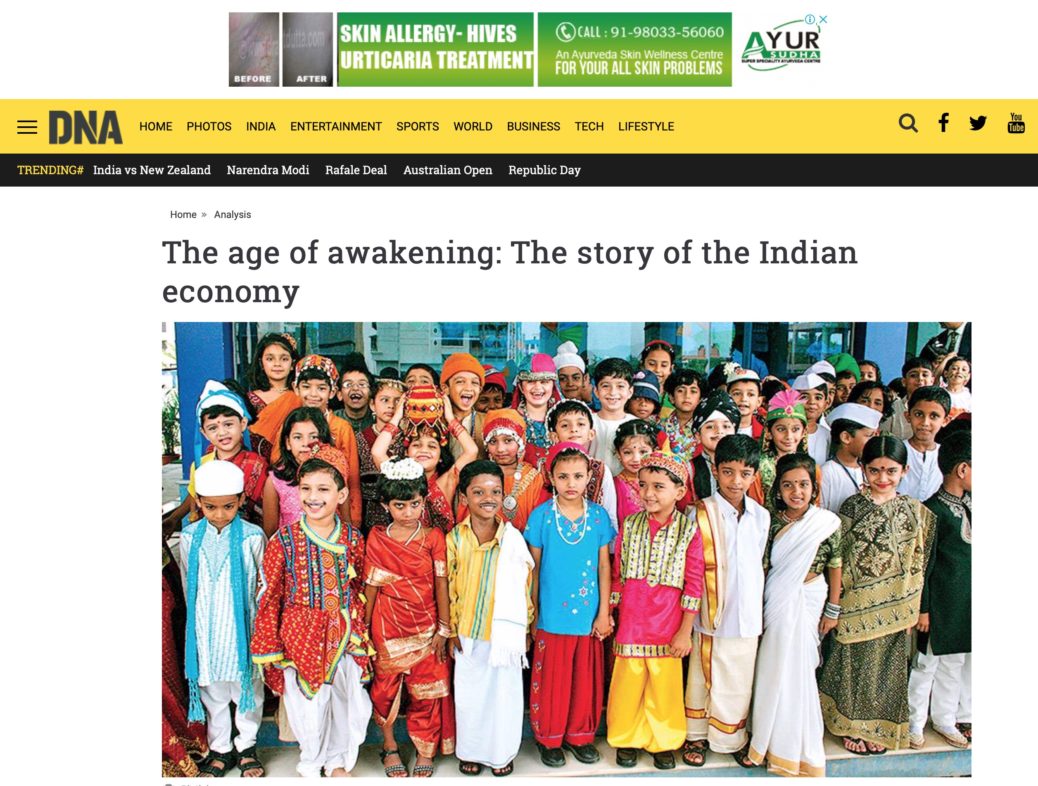 The age of awakening: The story of the Indian economy

India is an elaborate mix of contradictions and complexities. It is rare to find other countries in the world that embrace such an extraordinary diversity of religions, a multitude of ethnic groups, a disparate assortment of languages, and a range of economic development levels of the society. For these reasons, there was considerable skepticism surrounding the idea of India as a nation.

The British were especially doubtful than any unity of the Indian state could outlast their reign. A ‘Balkanization’ of the region was widely expected as soon as they left. When the renowned writer, Rudyard Kipling, was asked in 1891 if there was a possibility of self-government in India, he exclaimed, “Oh no! They are 4,000 years old out there, much too old to learn that business. Law and order is what they want and we are there to give it to them.”

Among others, Sir John Strachey, a British civil servant who gave a series of lectures in Cambridge in 1988 that were later compiled in a book titled India, also held a similar view. In the lectures he argued that ‘India’ was merely “a name which we give to a great region including a multitude of different countries”.

He pointed out that the differences among European nations were much smaller than those that existed across the Indian landscape. All the nation states that had formed in Europe arose from a shared identity of language or territory. India displayed no comparable sense of national unity.

Most popularly, Winston Churchill, the formidable Prime Minister of United Kingdom during the Second World War, once infamously remarked that “India is merely a geographical expression … no more a single country than the Equator”.

But, against all cynical assessments about the possible establishment of an Indian state, when the country gained independence in 1947, speculation began on how long it would stay united. With the death of every leader, eruption of new secessionist movement, or even failure of monsoons, the survival of India as a single entity was vehemently questioned. But the Indian experiment remained resilient through it all.

It also remained puzzling how a poor nation like India could sustain its democratic institutions. The idea of political equality seemed comically out of place in a society stratified by a hierarchical order of a caste-based system.

Unlike other democratic experiments of the West, India and Indians hardly had any awareness of the mechanisms of a democratic state. Macaulay in his characteristic exaggerated, but for once justifiable, outcry described India as “the strangest of all political anomalies.”

India has truly been an anomaly in its existence. Most of the nations that gained independence in the twentieth century eventually succumbed to autocratic or military rules. So, the democratic routines that India takes for granted after over seven decades of independence were once hard to fathom.

Time certainly has a way of trivialising successes. It is, therefore, crucial to revisit history and contextualise the times.

The latter is important because it is simplistic to pass judgments with the perfect hindsight of history. This is fairly common in the field of economics when the leaders at the time of independence are criticised for adopting a model of development that failed to place the economy on a high growth trajectory.

But as John Rawls, arguably the greatest political philosopher of the twentieth century, rightly pointed out; the giants of the past need to be understood in the context of their times and not ours.

Just as it is difficult to realise that the very existence of India was in doubt, it is also difficult to imagine a time when economic ideas of socialism and state control were the preponderant notions of the day.

Considering the conversations and interest surrounding the Indian economy in contemporary times, it was deemed necessary to similarly put our place in the world in context. With a per capita income of less than $2000, India is probably the poorest nation that is posited as the next economic superpower. To gaze so far ahead into the future, it is helpful to understand why the nation stands where it is today.

The birth of the Indian nation was fittingly marked by the stirring words of India’s first Prime Minister, Jawaharlal Nehru, in his famous ‘Tryst with Destiny’ speech.

Nehru’s words were more of a call to action for a nation that had been long suppressed under foreign rule and exploitation. It was a declaration to the world that India’s Independence had marked its age of awakening from the prolonged slumber that was imposed upon it.