Housing for all: How Budget 2017 can make up for the huge implementation gap 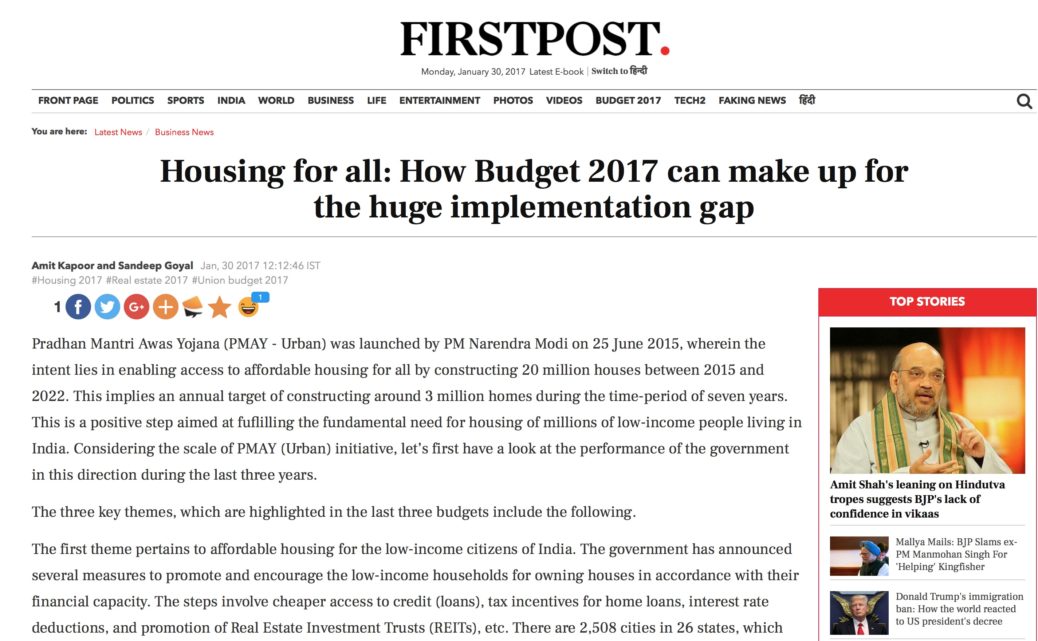 Pradhan Mantri Awas Yojana (PMAY – Urban) was launched by PM Narendra Modi on 25 June 2015, wherein the intent lies in enabling access to affordable housing for all by constructing 20 million houses between 2015 and 2022. This implies an annual target of constructing around 3 million homes during the time-period of seven years. This is a positive step aimed at fulfilling the fundamental need for housing of millions of low-income people living in India. Considering the scale of PMAY (Urban) initiative, let’s first have a look at the performance of the government in this direction during the last three years.

The three key themes, which are highlighted in the last three budgets include the following.

The first theme pertains to affordable housing for the low-income citizens of India. The government has announced several measures to promote and encourage the low-income households for owning houses in accordance with their financial capacity. The steps involve cheaper access to credit (loans), tax incentives for home loans, interest rate deductions, and promotion of Real Estate Investment Trusts (REITs), etc. There are 2,508 cities in 26 states, which have been selected by 2016 under PMAY (Urban) scheme. However, the scheme is facing a challenge regarding the speed of execution. There seems to be a significant gap between the number of sanctioned versus constructed houses during 2016. In Lok Sabha reply on 11 May 2016, the Ministry of Housing and Urban Poverty Alleviation (MHUPA) has stated that 710 houses have been constructed from the sanctioned number of 6,83,724 by May 2016. This 0.1% completion status by May 2016 reflects a major flaw in implementation approach. Going by this rate, the target of constructing 20 million affordable houses by 2022 seems to be a far-fetched dream. The intent is positive but to realise the same, there is an urgent need to move ahead with clear time-bound deliverables and outcomes.

The second theme focuses on rationalizing the tax structures for construction materials by providing the excise duty exemption to Ready-Mix Concrete on similar lines as Concrete-Mix manufactured-at-the-site. This action has led to improvement in construction costs thereby increasing the adoption of superior quality and environment-friendly building material.

The third theme relates to the digitisation of land records to reduce litigation, promote transparency and enable better ownership setup. The government has allocated a budget of Rs 150 crores for setting up an Integrated Land Information System. This step holds significance in resolving the perennial challenge of land rights faced by millions of low-income and poor people, especially in the rural areas.

Looking at the current and future, Budget 2017 should focus on four main areas. These include the focus on implementation, mode of clearances, demand-supply push, and use of technology.

First, the government needs to ensure better system and processes for time-bound completion of initiatives like PMAY (Urban). As of now, there is a considerable gap between planned and achieved numbers. The target of constructing 20 million affordable houses by 2022 is a grand vision, which needs proper accountability, frequent monitoring, and better control. The upcoming budget should focus more on the implementation aspect for the already announced housing schemes like PMAY (Urban) rather than announcing new ones. The budget should reflect upon and provide the statistical details (houses constructed year wise) as well as way ahead to ensure the timely completion in planned time-frame.

Second, there is a need to simplify the approvals and clearances for housing projects. Any housing project goes through multiple approvals requiring coordination with different government authorities. The delay in approvals at any stage has a chain effect on subsequent approvals thereby delaying the project completion time-frame and adding up the significant costs for the developer and the buyers. The budget should look at making a provision for single window clearance or narrowing down the approvals to minimise the housing project delays and cost overruns.

Third, ongoing focus and actions are required for enhancing the demand and growth of the housing sector. On demand side, this includes bringing further clarity on beneficiaries (besides EWS, LIG groups) under initiatives like PMAY (Urban). Also, the upcoming budget should look at encouraging the home buyers by offering further financial incentives as well as right to claim significant compensation in case of housing project delays. On the supply side, the government needs to facilitate the developers with ease of land acquisition and ease of financing of housing projects. The digitization of land rights is a step in the right direction. The facilitation of dividend distribution tax-free investments in REITs in the last budget is considered as a positive move. The upcoming budget should look at further simplification of taxes to encourage the growth and listing of REITs in India.

Finally, the government needs to encourage the adoption of technology-based materials and green approach in construction of affordable housing for all. The last budget took a step in this direction by exempting the excise duty on Ready-Mix Concrete. Similar focus is needed in the upcoming budget to encourage the adoption of better technologies and materials (pre-fabricated setup, green building) in affordable housing for the masses.

It is hopeful that the upcoming budget will focus on the above areas and drive the implementation of PMAY (Urban) in mission mode.

The articles was published with First Post on January 30, 2017.