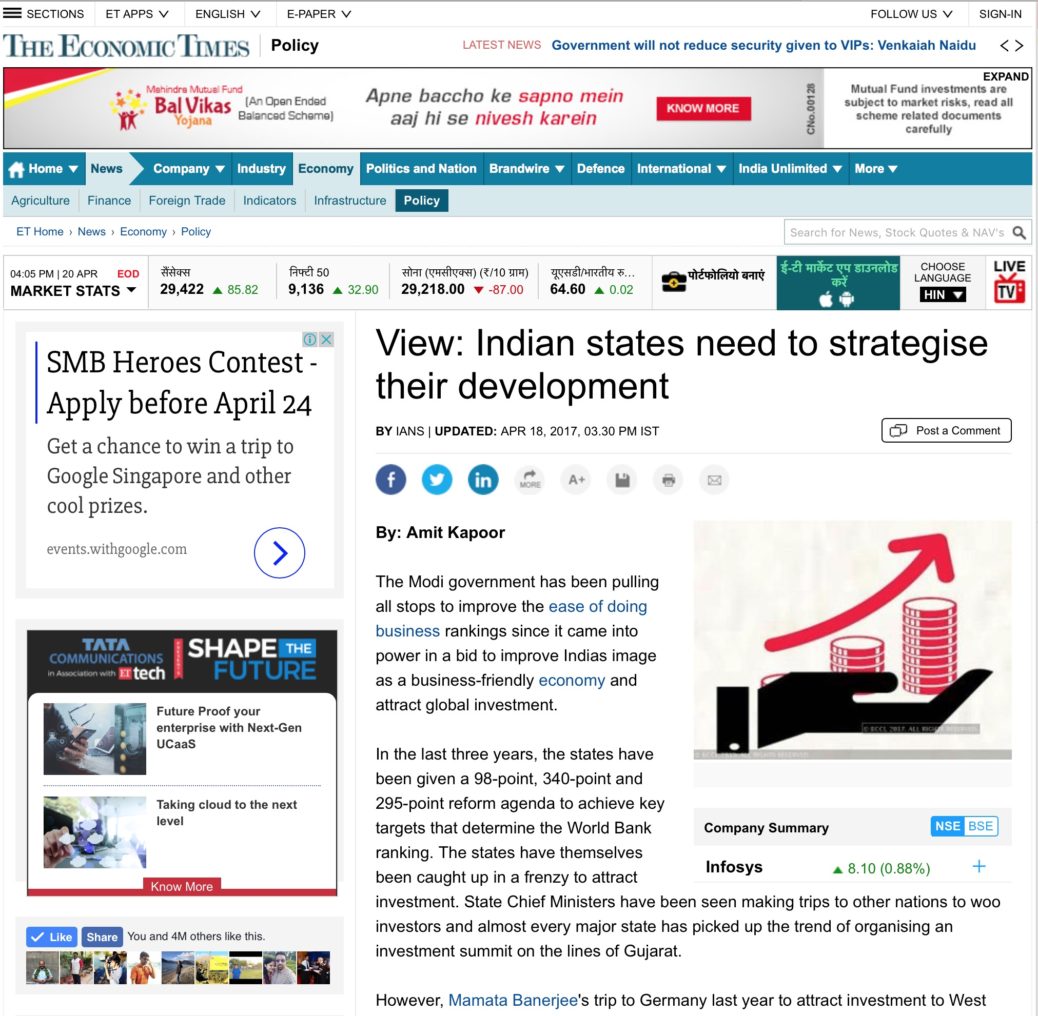 The Modi government has been pulling all stops to improve the ease of doing business rankings since it came into power in a bid to improve Indias image as a business-friendly economy and attract global investment.

In the last three years, the states have been given a 98-point, 340-point and 295-point reform agenda to achieve key targets that determine the World Bank ranking. The states have themselves been caught up in a frenzy to attract investment. State Chief Ministers have been seen making trips to other nations to woo investors and almost every major state has picked up the trend of organising an investment summit on the lines of Gujarat.

However, Mamata Banerjee‘s trip to Germany last year to attract investment to West Bengal failed to yield any results. Similarly, Amarinder Singh’s recent trip to Mumbai elicited demands of first revamping Punjab’s industrial policy and criticism for a lack of action to revive existing industries. Elaborate investment summits in these states have suffered a similar fate. Although these efforts are laudable, Indian states need to understand that one size indeed does not fit all.

First, Indian states are as big as nations across the world. For instance, Uttar Pradesh’s population that lives below the poverty line equals the entire population of South Africa. Similarly, Bihar, which has the dimensions of the 16th-most populous state of the US (Indiana), is home to a population equalling the combined population of the first four most-populous states of US. So, quite clearly, strategies that work for one state will not necessarily work for the other.

Each state needs to understand its drivers of competitiveness and play them up for prospective investors in that area. For instance, Punjab was historically an agrarian success story. So, it could incentivise setting up of food processing units by playing out the proximity it has to offer with high-yielding farms. It can also work on reviving its dying industrial cities of Jalandhar and Ludhiana as sports and cycle industry linkages already exist in thesecities. West Bengal can work upon developing a steel cluster owing to its proximity to neighbouring resource-rich states. Yhe northeastern states can develop a thriving tourism industry. States with port facilities can encourage development of export-oriented industries.

The investment summits that states have put so much faith into fail to follow such a focussed approach. When anything and everything is on the table, industries fail to see how a particular state is unique in its competitiveness. Throughout history, economic successes of regions have been stories of rise of particular industries followed by reinvention with the times.

For instance, both New York and London were centres of garment production and trade followed by the rise of financial industries when labour became costly. Regions like Detroit that were once known for being a production hub of certain industries but failed to reinvent have fallen into oblivion.

This brings us to the second point of the fallacy in the idea of merely attracting investment. More than business incentives, industries follow skill. Bengaluru has become an IT hub not because the Karnataka government offered tax breaks or speedy contracts — but due to easy access to a pool of talent in the field. An initial kernel of engineering talent attracted companies like InfosysBSE 0.96 % and a virtuous cycle of workers attracting potential employers and employers attracting potential employees developed.

Human capital, more than anything else, explains economic successes of regions. A study in the US showed that as the share of population with a college degree in an area increases by 10 per cent, its per capita gross product rises by 22 percent. On the contrary, an area with a skill-deficit usually loses out in the long-run. Detroit, which was once a production hub for cars attracted plenty of low-skilled workers and when the firms moved out of the city after the labour began demanding higher wages, the city failed to re-invent itself unlike New York or London due to a lack of skill in the area.

Therefore, to ensure economic success, states need to understand these two things: develop and showcase their drivers of competitiveness and simultaneously develop a vast pool of talent for long-term sustainability of its economy.

The role-reversal of corporates running after chief ministers for setting up industries to chief ministers wooing the former is a welcome picture in the Indian business landscape. However, short-sightedness and a lack of strategy is delaying change across Indian states.

The article was published with Economic Times on April 18, 2017.