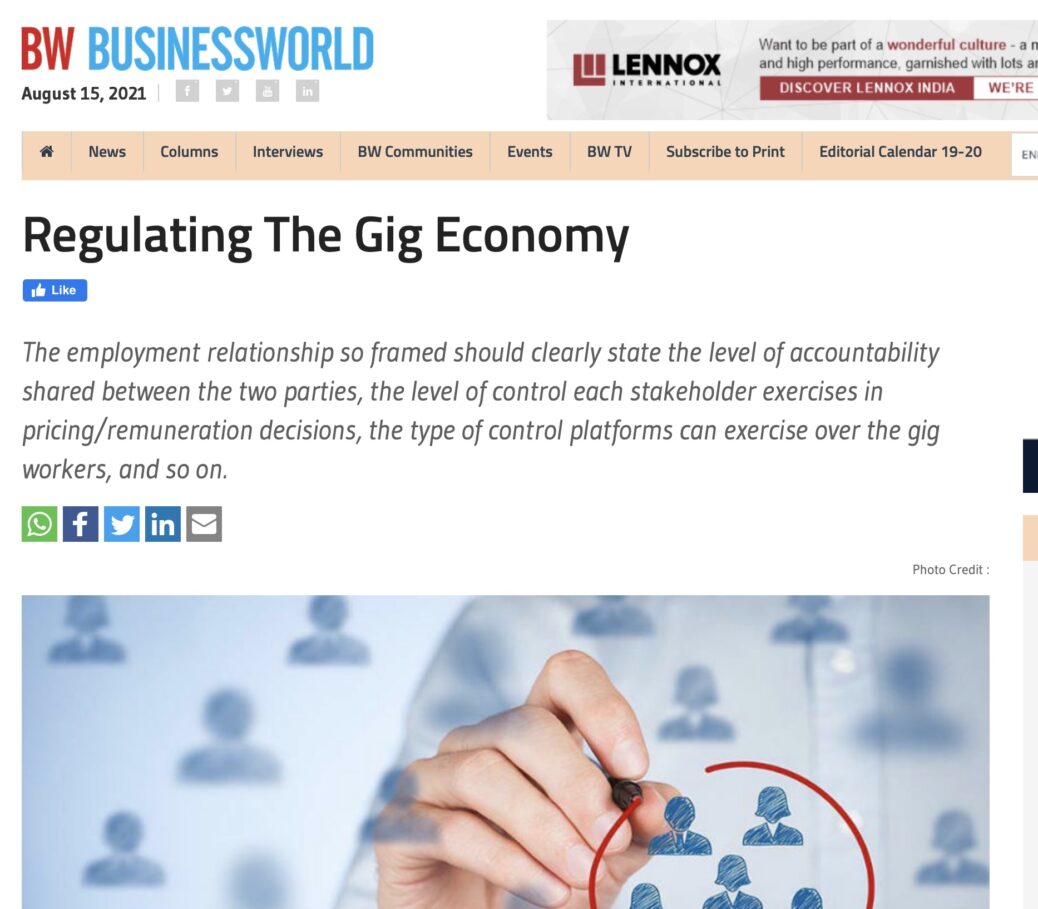 In the recent past, the term “gig economy” has become a buzzword in the business space. The way it disrupted the traditional norms of working and enhanced consumer experience, has attracted the attention of policymakers as well. However, the attention is not completely positive. The oft-alleged issues of unfair terms of work and lack of social security have also been points of focus, and ignited discussions on how to regulate the gig economy and protect workers’ rights.

However, gig economy is heterogenous in nature, and can be confused with other overlapping concepts like platform economy, sharing economy, etc. The rise in popularity of businesses like Uber, Zomato and Upwork has made gig economy synonymous with platform businesses, but the two need to be distinguished from each other. In order to regulate the gig economy, it is essential to first define it. In simple terms, gig economy involves workers earning income from taking up gigs or single projects or tasks, instead of serving a company as employees. On the other hand, platform businesses are businesses that act as a bridge between the seller and consumers. Also known as aggregators, they do not own the commodities they sell, and instead, reduce the transaction cost for both sellers and consumers by providing a common platform where they can carry out transactions.

Shopping websites that platform third party sellers are, therefore, platform businesses. But so are apps like Uber and Ola, who do not sell anything but match cab drivers with users looking for a cab. Hence, platforms facilitate various types of transactions, but the point at which platform economy meets gig economy is when gig work is facilitated by these platforms, as in the aforementioned case of cab-hailing. As the digital technology has taken over all form of businesses, a large part of gig economy is now occupied by platform-enabled gig work.

Even within platform-enabled gig work, there are both high-skilled gig workers like freelance writers and coders seeking project-based work through online job portals and low-skilled workers engaged in cab driving or delivery services. When the gig economy is critiqued in relation to its workers, the discussion is usually about the second category- the blue-collar workers.

All the issues concerning blue-collar gig workers can be easily boiled down to the imbalance of power between them and the platforms they engage with. Since low-skilled workers are in high supply in the labour market, they are more disposable and have a low bargaining power. It must be noted that gig workers are not employees, and hence, all the labour protection laws do not apply to them. The ambiguous employment relationship entails that platform deploy algorithms to set remuneration, with workers having no say in the matter, but it is couched in demand-supply mechanisms. This is not the case with high-skilled gig workers or other types of platforms. Secondly, although gig economy regards the workers and platforms as equal partners, the accountability for services is not shared by platforms. These are only a few way in which platforms leverage the ambiguous employment relationship to exploit the tilted power equations.

Hence, the first step to regulating the gig economy is to define the employment relationship within it. The employment relationship so framed should clearly state the level of accountability shared between the two parties, the level of control each stakeholder exercises in pricing/remuneration decisions, the type of control platforms can exercise over the gig workers, and so on. So, platforms cannot term their workers as gig workers, if they do not fit the definition. Once the outlines of gig economy are more clearly drawn, then only can regulators proceed to deciding which regulatory tools to use.

The article was published with Business World on August 8, 2021.