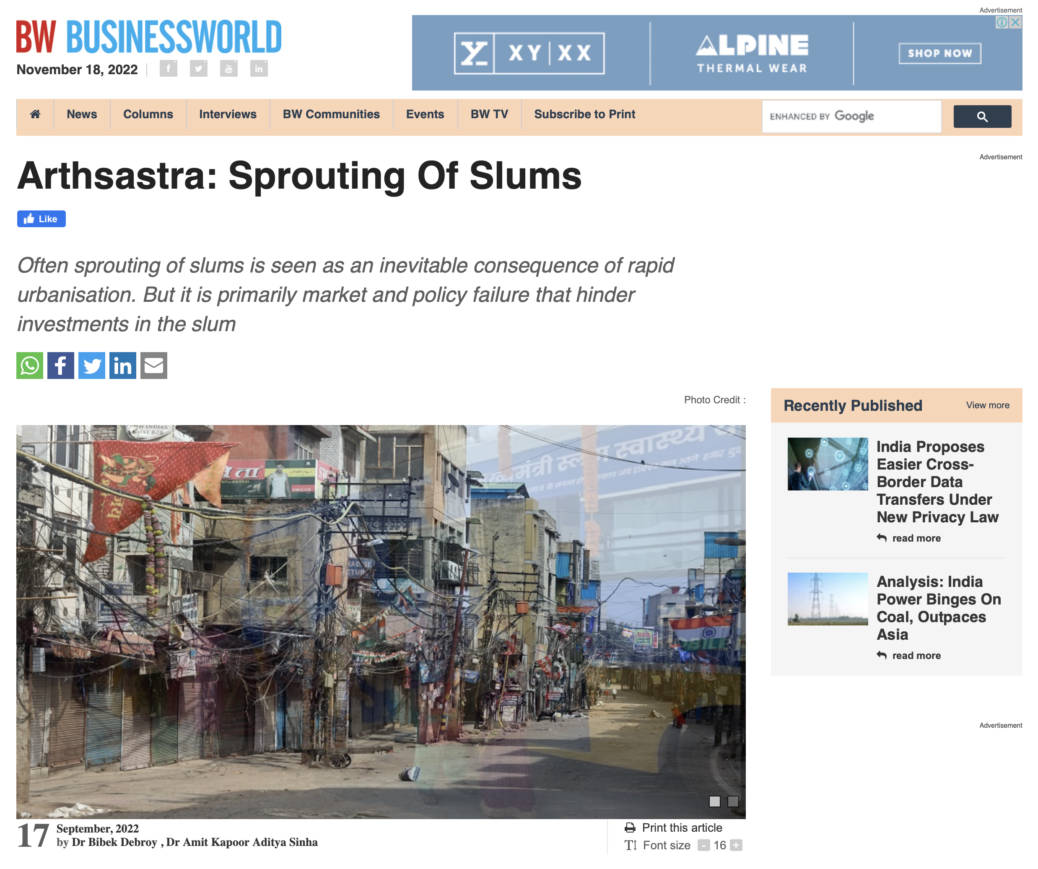 Often sprouting of slums is seen as an inevitable consequence of rapid urbanisation. But it is primarily market and policy failure that hinder investments in the slum

The Union government has launched key welfare schemes in the last eight years, including the Swacch Bharat Mission or Jal Jeevan Mission. These schemes have been a runaway success in improving equity among the masses. However, one key marginalised section that is yet to avail of these benefits in its entirety is the urban slum dweller.

The proponents of the ‘modernisation’ theory of slums claim that the emergence of slums is a transitory phenomenon in emerging economies. Economic growth has a trickle-down effect, and this eventually leads to a transition toward formal housing. Many developed countries have undergone this phase. However, as Marx, Stoker & Suri (2013), in their paper ‘The Economics of Slums in the Developing World, point out, “life in the slum might constitute a form of poverty trap for a majority of their residents”. The Economic Advisory Council to the Prime Minister (EAC-PM’s) recent calculation also points in this direction. While poverty in rural areas has decreased by 5.6 per cent, it has only reduced by 1.1 per cent in urban areas. In states like Bihar, Haryana, Uttarakhand, Uttar Pradesh and West Bengal, the number of people living under the poverty line is higher in urban areas than in rural areas. It is plausibly, because of the absence of land titles and difficulty in relying on the safety net in urban areas created by several schemes, like SBM, JJM, Ujjwala or something like the Pradhan Mantri Gareeb Kalyan Yojana.

Often sprouting of slums is seen as an inevitable consequence of rapid urbanisation. But it is primarily market and policy failure that hinder investments in the slum. This, in turn, affects human capital. In one of our columns on these pages, we discussed the problem with the definition of ‘urban’ in India. The definition of urban also affects how policies on slums are shaped in India. What is a slum? There is a Union-level Slum Areas (Improvement and Clearance) Act, 1956. With an extensive definition of slums, the Act provides for the improvement and clearance of slum areas only in the Union territories. It has an exhaustive definition of slums. Since land and colonisation are state subjects, the responsibility for formulating and implementing schemes pertaining to slums lies with the states. With the presence of a comprehensive Union level Act, states also draw significantly from it.

Similarly, for the purposes of enumeration, the 2011 Census draws from this Act. The Census defines slums as “residential areas where dwellings are unfit for human habitation by reasons of dilapidation, overcrowding, faulty arrangements and design of such buildings, narrowness or faulty arrangement of the street, lack of ventilation, light, or sanitation facilities or any combination of these factors which are detrimental to the safety and health.”

The Census further classifies slums into three categories, i.e., (a) notified slums, (b) recognised slums and (c) identified slums. The slums which have been notified as ‘slums’ by the state/UT government or local government under any Act fall under (a). Whereas (b) comprises areas recognised as ‘Slum’ by State, UT Administration or Local Government, Housing and Slum Boards, but are not formally notified under any Act. The third category, i.e., identified slums, comprises areas with a “population of 300 or about 60-70 households of poorly built congested tenements, in the unhygienic environment usually with inadequate infrastructure and lacking in proper sanitary and drinking water facilities”.

Notably, census 2011 only identifies slums in statutory towns and not in census towns. Therefore, out of 4,041 Statutory Towns in Census 2011, slums have been reported in 63 per cent of the statutory towns, i.e., in 2,543 towns. One should note the third category of slums in the census, i.e., the ‘identified slums’ can also be found in the census towns but also in some large villages. But the census completely ignores these slums. Article 243G & 243W of the Indian Constitution lays down the powers, authority and responsibilities of panchayats and municipalities, respectively. The 11th & 12th Schedules inserted in the Constitution through the73rd and 74th amendments to the Constitution contain the entries on responsibilities of the local bodies. Entry number ten of the municipalities list is ‘slum improvement and upgradation’. There is no such entry in the 11th Schedule. This means that while there might be slums in rural areas that have not yet been classified as urban, the rural local bodies are neither equipped nor responsible for slum upgradation, redevelopment and clearance.

Similarly, the slums in the 3,894 census towns (2011 census), which are also governed by rural local bodies, also fall through the cracks. Thus, even before these areas are classified as urban, they will have a significant population living in the slums. Therefore, for the purposes of a concerted policy on slums, the next census should also identify slums (primarily (c), i.e., the identified slums) even in the census towns.

Lately, the Union government has launched several schemes for the upgradation of slums in the states. Under the Pradhan Mantri Awas Yojana ‒ Urban, the Union government provides an assistance of Rs 1 lakh per house under the component of In-situ Slum Redevelopment (ISSR). The slum dwellers are rehabilitated in the same location in partnership with the private developers by monetising the land that gets freed up. The Union government gives flexibility to the state to implement this scheme. Similarly, under the Beneficiary-led Construction vertical of PMAY, households can avail of a subsidy of Rs 1,50,000 to build housing on land they own.

However, some studies have flagged that since slum dwellers did not hold the land title, they could not avail themselves of the benefits of this scheme. Further, such schemes are implemented more efficiently in the bigger cities. The urban slum dwellers in smaller cities and towns do not get benefitted from these schemes.

The states should take cues from Odisha. In 2017, it enacted the Odisha Land Rights to Slum Dwellers Act. Under this Act, land rights and land entitlement certificates have already been given to more than 1,70,000 households. Odisha further aims to upgrade 2,919 slums in 114 cities. Such schemes should be celebrated and emulated. In his Independence Day speech, the Prime Minister asked India to take a ‘pran’ to become developed. This cannot happen without the benefits of economic growth percolating into urban slums.

The article was published with Business World on September 17, 2022.