The wave of Resentment 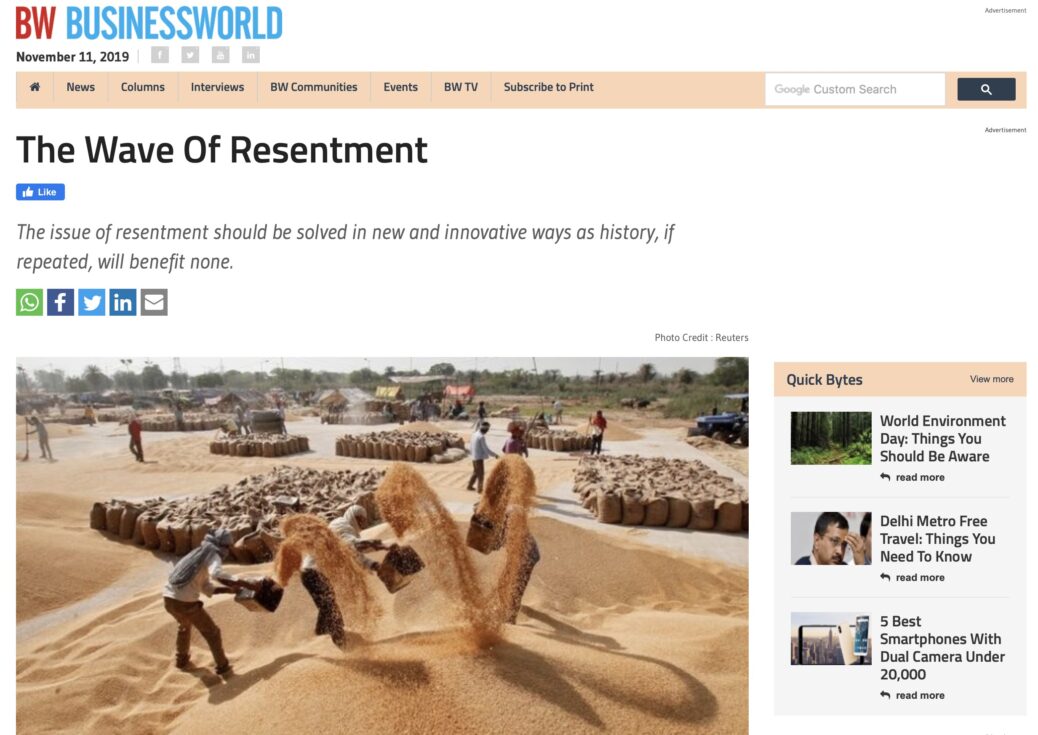 The wave of resentment

The world today is witnessing a pattern of resentment with multiple outbreaks taking place across the globe. Starting from Ecuador, a series of protests turned into riots, while opposing the government’s harsh measures. A similar uprising was observed in Chile’s Santiago, in response to the rising cost of living against growing income inequality. Amidst allegations of fraud, the re-election of Bolivia’s incumbent president Evo Morales escalated the protests in the country.

The uprisings in Hong Kong, Iraq, Haiti, or in Beirut and other parts of Lebanon all are hard to miss. As Catalan protestors began to demand independence from Spain, violent demonstrations on the streets of Barcelona proliferated. London also saw massive protests against Brexit. The crumbling economy of France led to the yellow vests movement in Paris.

Though every protest is indigenous, yet they are all triggered by deteriorating economic conditions. The nearly zero-level of GDP growth rate in some countries and rising inequality, corruption, and indebtedness in others have accentuated the feeling of discontentment.

Even the protests in places such as Hong Kong that appear to be an expression of the demand for autonomy by the regions have additional economic connotations. The small and medium-scale enterprises, which employ the majority of Hong Kong locals have seen sluggish economic growth than the blooming multinationals, leading to a steep rise in income inequality in the country.

The flawed global economic structure is to be blamed for this. The system is skewed, giving wealth in the hands of the few, and this skewness becomes more prominent during the slowdown. Thus, it is a consequence of this system that the world protests are taking place at the same time when the IMF is hinting towards the global economic slowdown.

The global economic order, which was established towards the end of World-War II in Bretton Woods, centred around the idea of open markets and free trade through monetary cooperation. It was perceived to be more conducive to peace and prosperity in the backdrop of the War.

It focused on the developed world and worked for countries such as the United States, Western Europe, and some East Asian ones that grew at high rates with full employment. But the system benefitted them only for two decades. When the oil shock and stagflation hit the world, it led to an alternate model of thinking, which argued in favour of placing trust in the markets and widespread deregulation. But its benefits spread unevenly.

With the availability of cheap labour, production moved out of the developed countries. The wages of the working class in those countries stagnated, but the economy grew. Thus, inequality widened in advanced economies. Furthermore, developing countries grew with the largest number of people being pulled out of poverty in China and India. However, upheavals caused by the economic crisis of 2008 had put an end to these trends. Till now, the world hasn’t recovered.

With economies around the world experiencing slower growth, the problem of rising inequality is coming out in the form of violent demonstrations. The demonstrations have not ameliorated even when the demand of protesters are met. It implies that people have lost confidence in the economic system and in the government’s ability to fix it, similar to the inter-war period. It was an identical situation of economic stagnation and inflation in Germany that led a fascist like Hitler to power. But the world does not need such extreme steps now. The issue of resentment should be solved in new and innovative ways as history, if repeated, will benefit none.

The article was published with Business World in the issue dated November 9 to November 22, 2019.