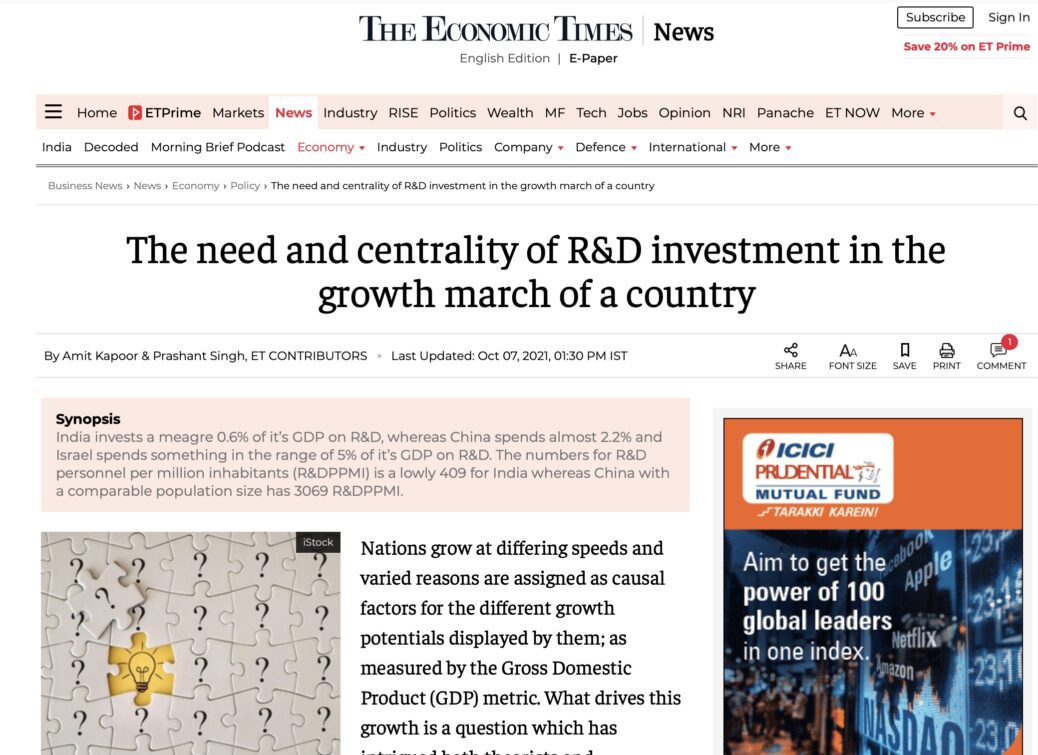 Nations grow at differing speeds and varied reasons are assigned as causal factors for the different growth potentials displayed by them; as measured by the Gross Domestic Product (GDP) metric. What drives this growth is a question which has intrigued both theorists and developmental researchers. Can growth solely be determined by capital accumulation or with a growth of the labour force or does technological progress also contribute to it? GDP measures the total value of all the goods produced and services provided within the boundaries of any country and is agnostic to the nationality of the producer as long as the production is taking place within the spatial confines of a country, and even to the taxable geographical expanse of a country; as production tax heavens (Special Economic Zones) are created for both goods and services to keep the general tax regime from affecting the entrepreneurial business sentiment. GDP as a growth metric has been chosen for various reasons, the foremost of which is it’s quantifiable and global nature. It is used by global agencies such as the World Bank, IMF, and the United Nations Organization to compare the investment and growth potential of various nations.

R&D investment could either be made for basic, applied or experimental development research (EDR). The OECD Library defines Basic research as “experimental or theoretical work undertaken primarily to acquire new knowledge of the underlying foundations of phenomena and observable facts, without any particular application or use in view.” Applied research is defined as “original investigation undertaken in order to acquire new knowledge.” However, it is specific with regards to the practicality of it’s aim or objective. Experimental development is defined as “systematic work, drawing on knowledge gained from research and practical experience and producing additional knowledge, which is directed to producing new products or processes or to improving existing products or processes.”

In general it is the governments which are majorly invested in basic and applied research as knowledge creation is the primary objective and there is a high degree of uncertainty involved. Such endeavours have far greater social returns than private returns on investment. Even the private sector is a major beneficiary of both the R&D ecosystem thus created and the new knowledge generated. In contrast, EDR promises greater private returns on investment and comparatively a greater degree of certainty as compared to Basic and Applied research ventures, and hence is more attractive to the private sector.

A macro-econometric modelling exercise performed by Shin Taeyoung of Science and Technology Policy Institute, Seoul, Korea for the OECD came to the conclusion that public spending on R&D might have a permanent positive effect; to the tune of 1.5% increase in GDP over a 25 year period as compared to a predicted constriction of GDP when policy alternatives like Construction Investment (-0.25%), Investment Fund (-0.44%) or an Unemployment Fund (-0.4% ) are applied. Another empirical study in Turkey of 22 manufacturing firms listed on the Istanbul Stock Exchange by E B Bayarcelik and Fulya Tasel reported a positive and significant relationship between R&D investment and number of the employees in the R&D department with GDP. In a study of the South African peach and nectarine industry, published in the African Journal of Science, Technology, Innovation and Development in the year 2018, the evidence suggested that with every R100 invested in the R&D programme there was an increase in value by R55.9 in the peach and nectarine industry; a fairly high marginal rate of return. There are numerous other such studies which support the case for an increase in the level of investments into R&D so that a sustainable growth regime could be attained.

The other two determinants of economic development, i.e., capital accumulation and growth of the labour force would be left meaningless and unsustainable without technological progress, as there is always a limit to value addition that could be attained at any particular level of technological development. Every new technological revolution has brought with it creation of new jobs and the destruction of old ones which are left redundant because of the technological advancement. But, the overall has always been addition in the numbers of the labour force. In this light the only point of focus for the developmental experts should be to create and support an ecosystem for R&D which would not only meet the needs and aspirations of not only the local but also of the global consumer.

India invests a meagre 0.6% of it’s GDP on R&D, whereas China spends almost 2.2% and Israel spends something in the range of 5% of it’s GDP on R&D. The numbers for R&D personnel per million inhabitants (R&DPPMI) is a lowly 409 for India whereas China with a comparable population size has 3069 R&DPPMI. South Korea boasts of an R&DPPMI figure of 9794 as per 2018 data provided by UNESCO. For India to truly emerge as a global technological powerhouse the investment in R&D needs to be increased at least four folds. In this light the pertinent question is who will bear the burden of this extra investment in the R&D ecosystem. Can we expect the private sector to chip in the near term or will the government have to bear the additional costs and for how long?

The article was published with Economic Times on October 7, 2021.