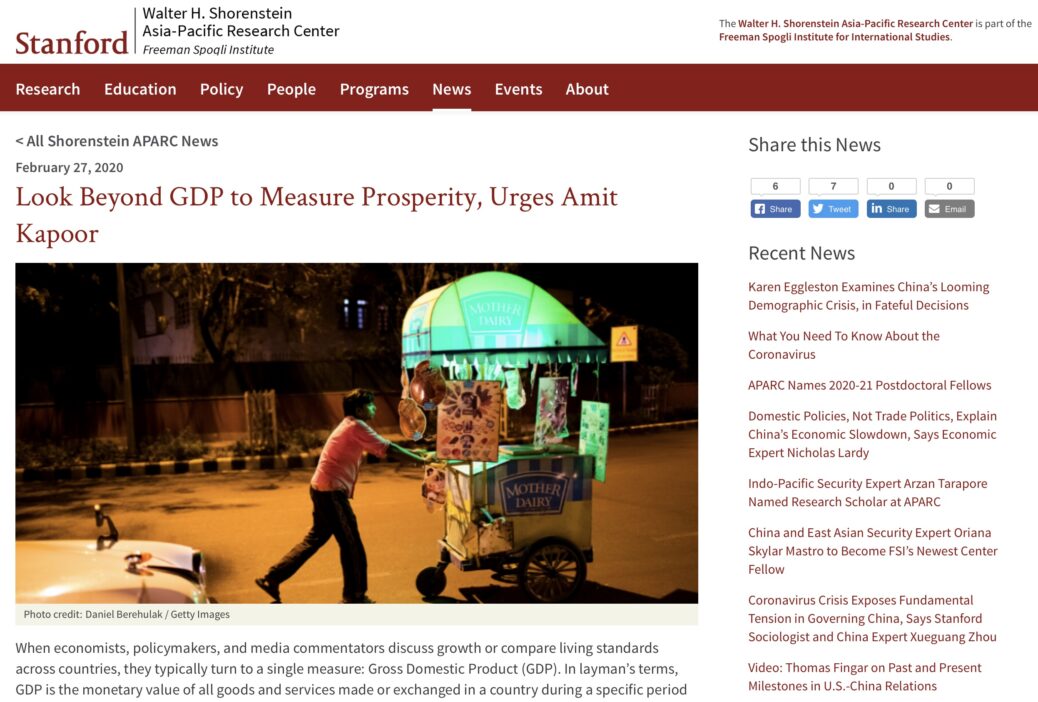 When economists, policymakers, and media commentators discuss growth or compare living standards across countries, they typically turn to a single measure: Gross Domestic Product (GDP). In layman’s terms, GDP is the monetary value of all goods and services made or exchanged in a country during a specific period of time. The calculation of a nation’s GDP is complex and takes in a multitude of country-specific caveats, but the final figure per capita is supposedly a proxy for a nation’s economic health.

Using GDP as a measure of welfare, however, has multiple problems. Just ask Dr. Amit Kapoor, an expert in economic development and business strategy, who rebuts the focus often placed on the importance of GDP. As the chair of the Shared Value Institute of India, president and CEO of the India Council on Competitiveness, and as an affiliate faulty member with the Institute of Strategy and Competitiveness of the Harvard Business School, Kapoor has spent a great deal of time and effort working with the governments of India and other countries on measuring social progress and developing living standards, performance, and progress indices. In a recent lecture as part of APARC’s South Asia Colloquia, Kapoor made his case for looking past GDP when considering the overall well-being of nations.

GDP, says Kapoor, originated in the 1940s as a wartime estimate to provide a window into a region’s economic situation and is based on the paradigm that economic objectives equal social objectives. Yet economic development doesn’t always lead to advancements in social progress and human prosperity. To gain a complete understanding of a nation’s growth, he argued, it is important directly to measure social progress, which includes indicators of human well-being such as access to education, equal opportunity, health services, sanitation and clean water, social inclusion, and even tolerance.

Our world as we know it is facing multiple threats, Kapoor reminds us, from environmental extinction to the rise of populism and to the crisis of capitalism. We can only address these issues “by creating alternate measures of how we assess human well-being.”

Kapoor points to the apparent growing gap between economic gains and social parity as evidence that GDP-centricity gives a very pixelated, partial picture of national development. In the past 80 years, economies as a whole have gained exponentially, as indeed reflected in GDP measurements, but progress on issues such as basic human needs, personal well-being, and opportunities for individual fulfillment have seemed to lag.

Kapoor’s issue with GDP is that it fails to account for these other kinds of social, environmental, and cultural factors. To this end, he advocates considering other means of measuring success and development, such as the Human Development Index, or his research to gauge and codify “ease of living” measurements in his home country of India.

“In an economy with well-being at its heart, economic growth will simply be another tool to guide it in the direction that the society chooses. In such an economy, the percentage points of GDP, which are rarely connected with the lives of average citizens, will cease to take the center stage. The focus would instead shift towards more desirable and actual determinants of welfare.”

You can read more of Amit Kapoor’s perspectives and learn more about his work to redefine development in India in his Harvard Business Review article, “GDP Is Not a Measure of Human Well-Being.”