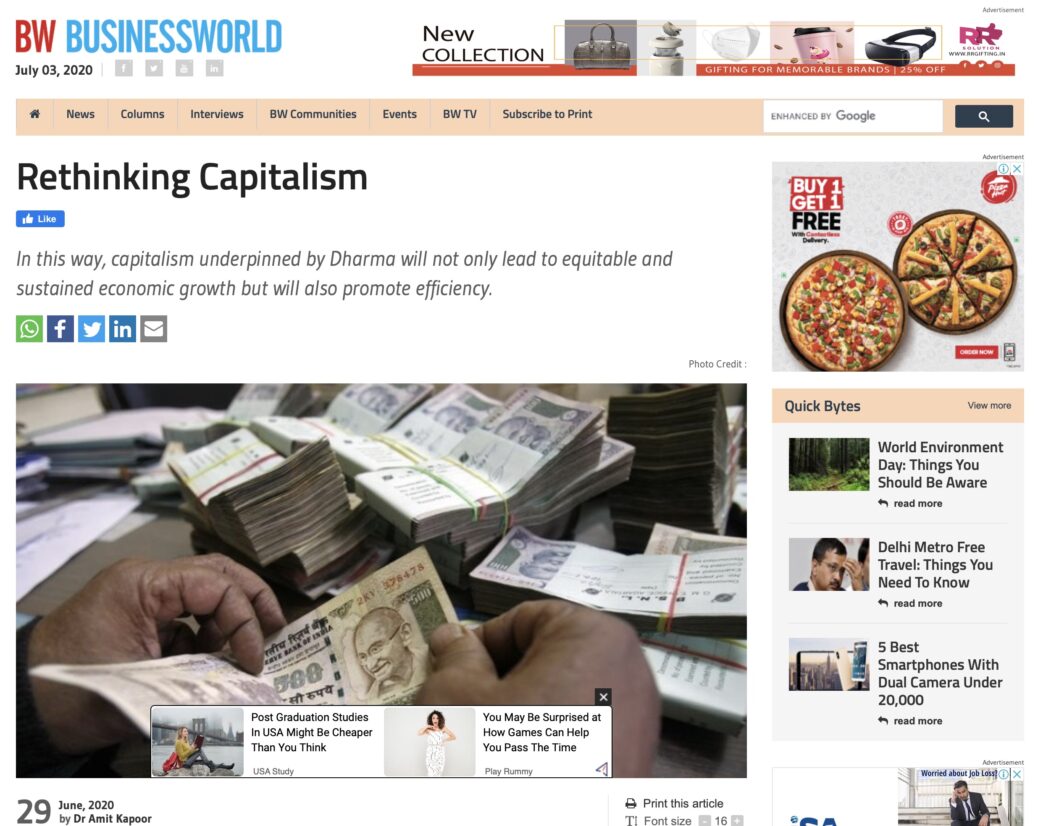 The Covid-19 pandemic has awakened us to the rising inequality around the world that economists have long been warning about. A system proven to be the most efficient for allocating resources is now revealed to be having fault lines festering within. The current crisis is an opportunity to bring in some needed reforms.

Instead of looking to replace economic systems, it is important to understand that it might not necessarily lead to change in motivations of individuals, and may lead to inefficiency without mitigating inequality. Instead, we need to reboot capitalism with better underlying ethics. To this end, we don’t need to look outside our borders when India is where the concept of Dharma (righteousness) originated. It not limited to Hinduism and Buddhism, but is more akin to a code of conduct, duty or ethics.

Dharma is central to Eastern culture, in the sense that our thoughts and actions are guided by our concern for the society at large. Capitalism, on the other hand, originated in the West, where individual is put above the community. While individualism does not contradict Dharma per se and has ensured immense prosperity under capitalism, an excess of it has birthed newer issues in the economic order. The 2008 recession was a culmination of those issues, but the Covid-19 pandemic may deal a heavier blow to the capitalistic system, one that it may not recover from.

During this crisis, inequalities have further widened. The less fortunate have been hit the hardest, revealing that modern-day capitalism only benefits a few. Moreover, the surge in lay-offs, limited access to healthcare and shutdown of small businesses have further emphasized the point that capitalism lacks resilience.

The issues within the system, excused on the pretext of pursuing individualistic goals, have been manifesting for some time as corporate slavery, unequal distribution of risks in franchisor-franchisee relationship and disproportionate distribution of returns in large corporations. For instance, franchisee stores make high-stake investments and have low profit margins, but even the most profitable retail stores earn lesser than the CEO of those corporations.

At this time of reflection and change, capitalism also needs a reimagination. Capitalism underpinned by the ideals of Dharma imagines a system where businesses function in a manner that not only benefit themselves but also the society. It promises a more sustainable and equitable system. The pandemic even saw examples of such conscientious capitalism- some businesses readjusted their operations to produce essential medical supplies, others made heavy donations or financially supported small businesses in their supply chain, and some corporations hired new employees and went ahead with promotions despite unfavourable market conditions.

While reforming the modern-day capitalism is a herculean task, a silver lining to the current crisis is that it has put us on that path sooner than otherwise expected. It has reformed us as individuals to become more empathetic and responsible towards our community. Now, the next step is to reform the system that we are a part of. It can begin with large corporations stepping beyond Corporate Social Responsibility (CSR) to uplift others. Practicing Dharma in capitalism requires that businesses conduct themselves with the objective of earning revenue as well as generating value in the society.

However, doing good to self as well as others is an ideal that requires creativity. Therefore, an ethical capitalistic order envisions innovation as the key to creating value for all stakeholders. In this way, capitalism underpinned by Dharma will not only lead to equitable and sustained economic growth but will also promote efficiency.

The article was published with Business World on June 29, 2020.