Innovation a driver of growth, prosperity 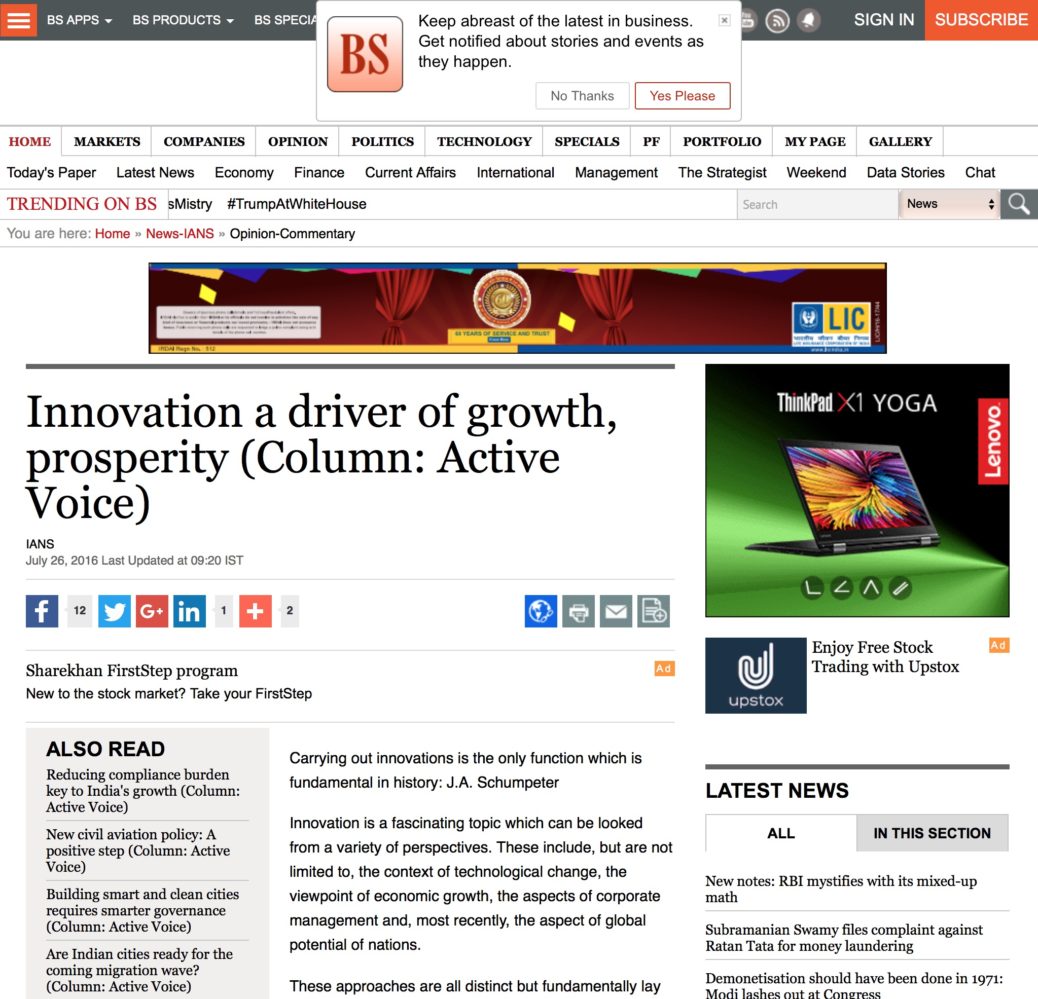 Carrying out innovations is the only function which is fundamental in history: J.A. Schumpeter

Innovation is a fascinating topic which can be looked from a variety of perspectives. These include, but are not limited to, the context of technological change, the viewpoint of economic growth, the aspects of corporate management and, most recently, the aspect of global potential of nations.

These approaches are all distinct but fundamentally lay bare the fact that innovation is one of the drivers of productivity growth and economic prosperity for companies and ultimately countries.

Technological innovation has been known from even before the time humans indulged in pottery. Here, there is often confusion between invention and innovation. Invention entails the creation of something new which may or may not have a commercial application. In contrast, or rather, post this initial creation, there often is the application of that discovery for the welfare of society as well as for the commercial benefit of the innovator. This is essentially the process of innovation.

Consider the case of antibiotics. From the discovery of sulpha drugs in the 1930s to the birth of the modern pharmaceutical industry, the world has come a long way. Similarly, consider the invention of the internal combustion engine and its application to automobiles and the creation of modern automobile industry.

History is replete with examples of inventions and their applications in newer ways to enable not only intellectual and technological progress but tangible physical and social progress which have benefitted people.

Other examples include the foray of scientists and pioneers into the semiconductor industry which have enabled us to write this piece on a computer. Still, others include the hobbyists trying to fly the airplane to its present-day avatar in the form of being a reliable mode of transport not only among countries but within countries as well. All these examples of breakthrough innovations show a pertinent dimension to look at innovation is from the viewpoint of technological progress.

Innovation can also be examined from the standpoint of economic growth. Those who have studied economics at elementary level know that until the 1950s, there was a broad consensus that labour and capital produce economic growth. It was Robert Solow who challenged the traditional growth model and explained that some growth is unexplained by capital and labour but was exogenous.

This was countered by Paul Romer (recently appointed the chief economist of the World Bank) who, in the 1980s, explained the growth which was unexplained by labour and capital was endogenous. This included “unexplained growth” concerning research and development and human capital as being responsible for the growth of several hotbeds of innovation in places which had seen little or low growth earlier.

Thus, it can be seen that research and development and its links to human capital and innovation are important for societies to develop.

Another context in which innovation is understood is from the point of view of corporate and management discipline. Several management thinkers and theorists have done great work in the area. These include, but are not limited to, Peter Drucker, Clayton Christensen, Eric Von Hippel, Vijay Govindarajan, Anil Gupta and Navi Radjou et al.

This idea was a preclude to his idea of open innovations. Similarly, now increasingly there is a focus on grassroots and frugal innovations in developing societies which can be systematized for markets elsewhere. Thus, from the management and corporate perspective too, innovations have had a substantial positive impact on society.

Finally, recent approaches have also tried to look at innovation environments at the level of countries. These include the Economist Intelligence Unit’s work which distinguished between innovation inputs and outputs as well as the work of Bloomberg news agency. The Bloomberg Innovation Index has six parameters to rank countries.

The most comprehensive approach on the innovation environments is the Global Innovation Report, which for 2016 is slated to be launched in the near future. The Institute for Competitiveness in India is also planning to shortly launch its State Innovation Index Report for India in 2016 drawing from these various stands of thought on the innovation discipline.

Over the next few years, India must take innovation seriously to enable not only economic growth but also to bolster its corporate sector as well as enable some breakthrough innovations in the emerging disciplines of nanotechnology, robotics and 3D printing. For that, bettering the innovation environment at the state and national level is imperative. It is because countries that have done well at various times in their history have done so due to providing the underlying environment for innovation to succeed. Policymakers must create the environment to enable a more creative and innovative India.

Published with Business Standard on July 26, 2016.