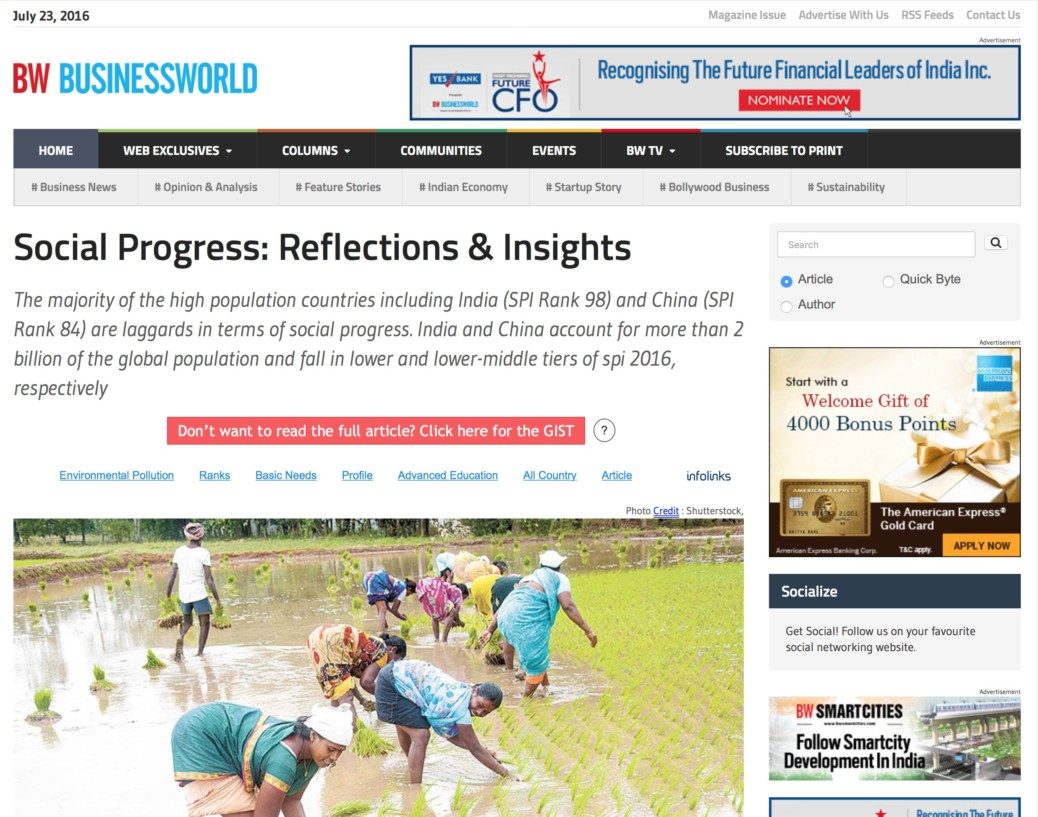 Gross domestic product (GDP) has established itself as a de-facto standard for measuring the economic performance of nations over the past 50 years. There is no doubt that focus on economic development has enhanced the prosperity of nations and their people. However, there is an increasing realisation that economic development is not sufficient for the inclusive growth of countries.

The global population is expected to reach 9 billion by 2030. The majority of this population will reside in the developing and underdeveloped economies and form a part of the low-income segment that lacks access to the formal market ecosystem for the fulfilment of basic needs, and lives and transacts in an informal economy. Environmental pollution is increasing owing to the significant amount of waste generation as well as lack of an efficient disposal and recycling ecosystem. These social and environmental challenges call for suitable frameworks which can guide the global institutions, countries and individuals to make better choices, appropriate policies, and time-bound actions so as to bring the social, economic and environmental growth in equilibrium.

The increasing realisation of social and ecological assessment led to the launch of well-being indexes like Human Development Index, Better Life Index, and Happiness Index, etc. These indexes set new direction for countries to evaluate their growth and performance. However, most of these indexes either tried to integrate social and economic parameters, or focused on input-based measures, or included limited set of social and environmental measures.

Among all these developments, Social Progress Index (SPI) got launched in 2013 as a broad measurement framework having exclusive focus on social and environmental dimensions. This index separates the social and environmental performance from economic performance thereby acting as a complementary metric to GDP as well as enabling the understanding of the relationship between social progress and economic performance. The SPI aggregates 12 components comprising 53 indicators into three main dimensions — Basic Human Needs, Foundations of Well-Being, and Opportunity. This multi-dimensional framework allows comparison among countries, states and cities across different levels ­— overall, dimensions, components and indicators. The SPI provides flexibility to policymakers to identify specific areas of improvement and set strategic priorities to focus on key social and environmental issues.

The SPI 2016, which was released in June 2016, provides interesting insights into the social and environmental performance of 133 countries.

First, the SPI 2016 top 12 very high social progress countries includes all five Nordic countries apart from Canada, Australia, Switzerland, Netherlands, United Kingdom, New Zealand and Ireland. These countries have maintained strong focus across all three dimensions of Social Progress. These countries have done relatively much better than other nations on Opportunity dimension, especially regarding Personal Rights, Personal Freedom, Tolerance and Inclusion, and advanced education. However, the overall performance of all countries on Opportunity dimension, especially Tolerance and Inclusion, (highest being 84.20) is relatively weak compared to performance on other dimensions and components of SPI. This raises the need for an urgent action plan at global level for tackling the growing challenge in terms of lack of tolerance and inclusion.

Also, India has underperformed on Foundation of Well-Being dimension (Rank 106, SPI Score 58.59), primarily related to Environment Quality component (SPI Score 48.03). This underperformance implies that India needs to put its act together for efficient waste management, preserving the bio-diversity, and controlling greenhouse gas emissions as well as outdoor air-pollution levels. Both India and China need to give a serious thought to the Opportunity dimension, especially on Personal Rights as well as Tolerance and Inclusion to match the Social Progress with GDP metric.

Third, countries falling in high and very-high tiers of SPI 2016 have lower population. However, the population profile in terms of age groups (<25, 25-54, >55 years) is balanced in these countries. In contrast, the major proportion of the youth population (<25 years) lives in countries belonging to lower-middle and low tiers of SPI 2016. The youngest age group living in low Social Progress countries faces challenges across all dimensions of SPI 2016, especially in terms of access to clean water, sanitation, healthcare, advanced education, personal rights, tolerance, and inclusion. This gap highlights the criticality of strategic actions at the global level for enabling better social and environmental ecosystem for upbringing the future generation so that our future is more conscious on social and environmental dimensions, more tolerant and inclusive of the well-being, personal rights, and needs of others.

In short, richer countries doing well on per capita GDP generally perform well on SPI as GDP growth leads to an increase in job opportunities thereby providing better lifestyle for the population. However, there is no perfect correlation between GDP and SPI. For Example, Costa Rica ranks 28th globally (high Social Progress tier) on SPI 2016 despite having much lower per capita GDP compared to other countries in high and upper-middle tiers.

Costa Rica has overperformed compared to any other country in terms of the relationship between Social Progress and GDP. Increasingly, global institutions and countries are realising the need for a fresh thinking to enable strategic actions against rising inequality, lack of tolerance, environmental degradation, and social exclusion. The SPI and GDP together can act as a potent combination in this direction for a better world in the future.