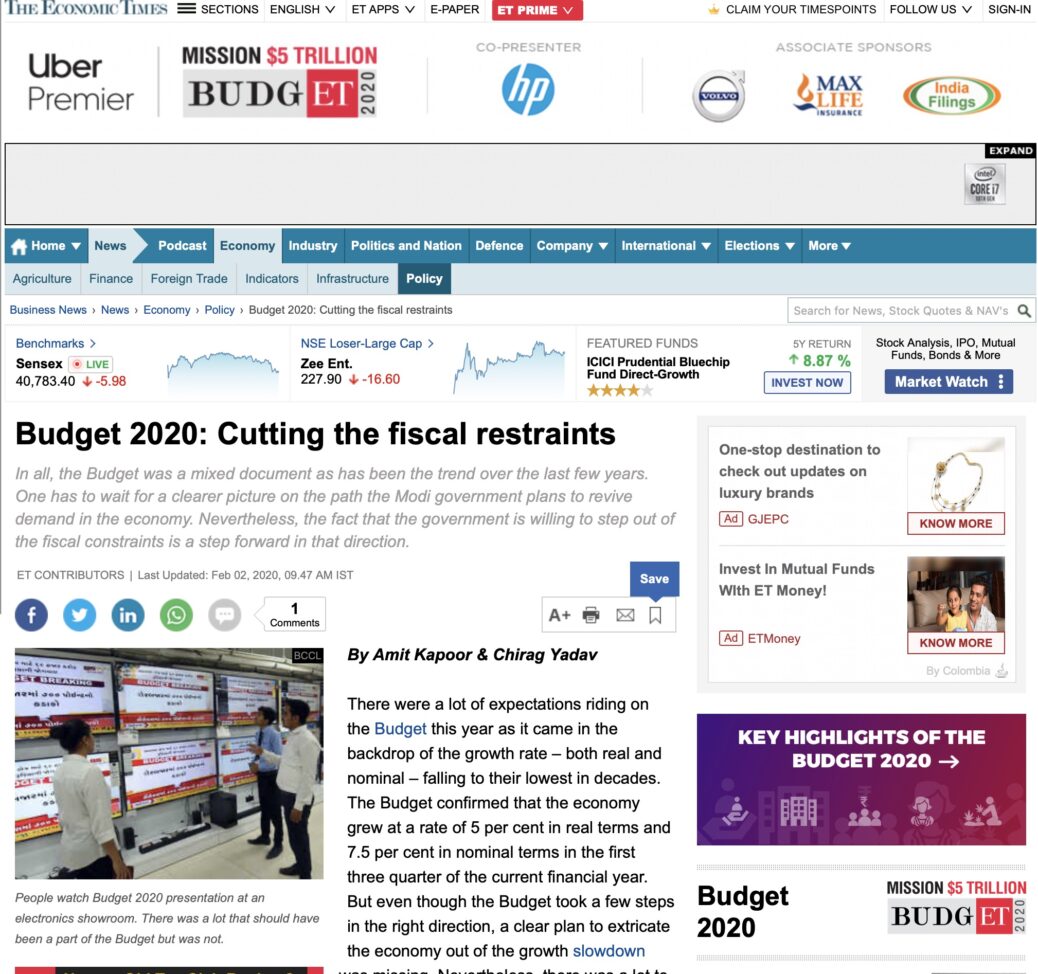 There were a lot of expectations riding on the Budget this year as it came in the backdrop of the growth rate – both real and nominal – falling to their lowest in decades. The Budget confirmed that the economy grew at a rate of 5 percent in real terms and 7.5 percent in nominal terms in the first three quarter of the current financial year. But even though the Budget took a few steps in the right direction, a clear plan to extricate the economy out of the growth slowdown was missing. Nevertheless, there was a lot to unpack in the longest Budget speech ever delivered in Indian history.

The good needs to be highlighted first. A broad takeaway from the budgets of the Modi government has been that the document is now treated for what it is – an instrument to outline the financial plans of the government for the upcoming year – and less as a platform to announce big-bang reforms. The latter is done through the year like any other country around the world. The pattern is a sensible move on the part of the government as Indian budgets have historically become an annual event unto themselves, which puts a certain pressure on every government to make disruptive announcement and adds to the general atmosphere of economic uncertainty.

With that being said, 2020 is not a normal year in context of the prevailing economic slowdown and it would have helped the economy had there been specific announcements to stimulate demand. However, in that regard comes the second good aspect of the Budget. The Modi government has been stringent about staying on the path of fiscal consolidation over the years, and with the economic slowdown it was advisable to loosen the purse strings a little bit to fuel demand. It was, therefore, a good move to opt for a fiscal stimulus and deviate from the path as much was permitted under the FRBM Act by allowing the fiscal deficit to clock 3.8 percent for 2019-20 instead of the targeted 3.3 percent and pegging it at 3.5 percent for 2020-21.

However, the government should ensure that the quality of the expenditure that arises out of a higher fiscal deficit remains of good quality, which it has partly done through higher allocations towards infrastructure spending. A significant push was made towards new infrastructure projects including transport, logistics, housing, clean energy, and so on.

The government also made an attempt to boost consumption by leaving people with higher disposable income through cuts in income tax across different slabs. But there are a few caveats on their efficacy to stimulate demand in the economy. First, as per the latest available figures, 6.86 crore people paid income tax in 2017-18; out of which over 2 crores paid zero income tax. Assuming India’s population to be 130 crores, this implies that 3.7 percent of the country pays income tax. So, the potential of stimulating demand through income tax cuts is limited. Second, the income tax announced in the Budget were conditional on not opting for tax exemptions, which usually encourage long-term savings. This implies that whatever consumption gains that can be made through the tax cuts will come at the cost of reduced long-term savings, which are crucial for the economy.

Moving beyond the specificities of the major highlights from the Budget, there was a lot that should have been a part of the Budget but was not. First, as a majority of the components of economic growth – consumption, investment, and exports – have taken a hit in the recent past and the final component – government expenditure – comes under severe strain due to wavering tax revenues, it would have helped the economy and the sentiments had the Budget laid out a clear road map for structural reforms. Hopefully, this is not an oversight and a part of the government strategy to separate reforms from the exercise of the Budget.

Second, upon looking closely at the Budget numbers, we have estimated that the budgeted estimates for expenditure on education and health for 2020-21 as compared to the revised estimates for 2019-20 have fallen from 3.5 percent and 2.4 percent of the total expenditure to 3.3 percent and 2.2 percent respectively. Considering the vitality of these sectors in ensuring long-term economic development, the expenditure cuts are problematic and will hopefully be offset by higher allocation from the infrastructure spending towards these areas.

Finally, the Budget also seems over-optimistic on the tax revenue and disinvestment targets. Since there was a shortfall of 11.8 percent in indirect tax collections in the current year, a projection of an increase of 11.1 percent in the upcoming financial year seems steep. Similarly, since about 84 percent of the disinvestment target of Rs 1.05 lakh crores in the current financial year has not been realised, setting an even higher target of Rs 2.1 lakh crores for the next year might skew the financial math even further.

In all, the Budget was a mixed document as has been the trend over the last few years. One has to wait for a clearer picture on the path the Modi government plans to revive demand in the economy. Nevertheless, the fact that the government is willing to step out of the fiscal constraints is a step forward in that direction.

The article was published with Economic Times on February 2, 2020