Budget 2020: The Need for Gender Budgeting 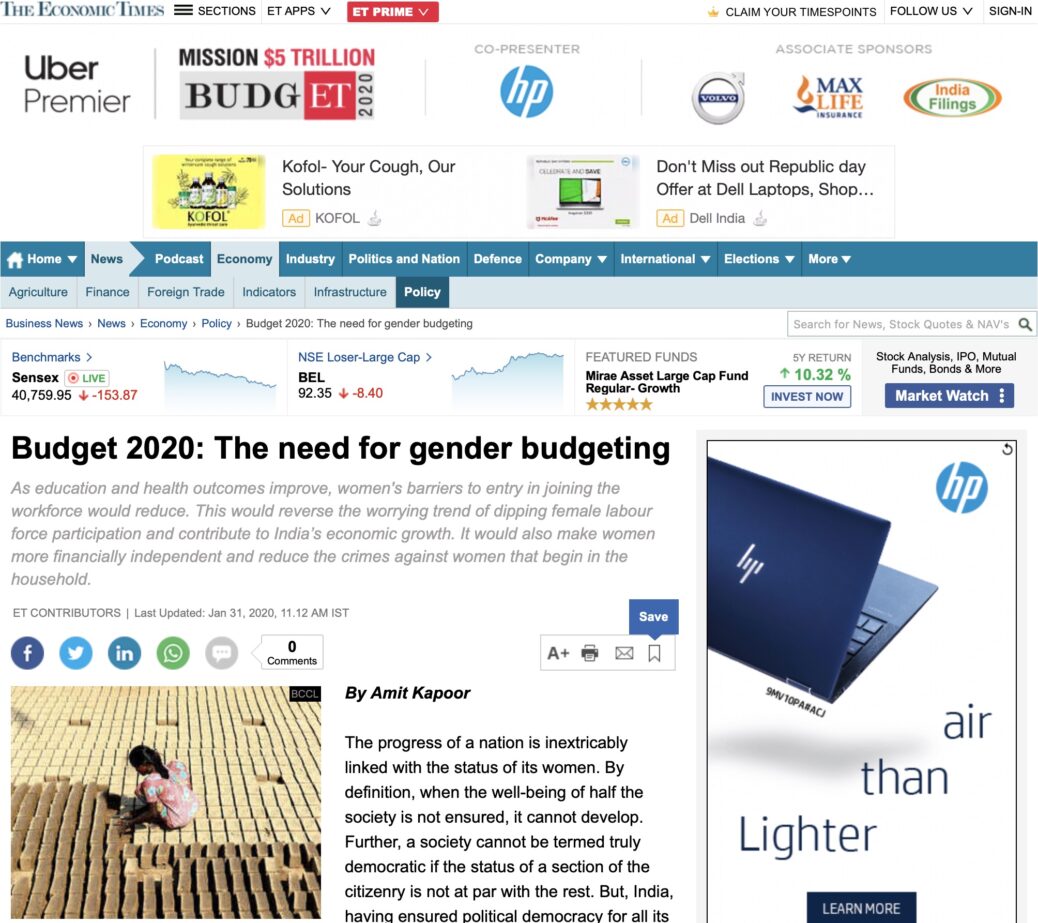 The Need for Gender Budgeting

The progress of a nation is inextricably linked with the status of its women. By definition, when the well-being of half the society is not ensured, it cannot develop. Further, a society cannot be termed truly democratic if the status of a section of the citizenry is not at par with the rest. But, India, having ensured the political democracy for all its citizens has had its limitations in achieving social democracy, which is evident in the prevailing socio-economic condition of women.

As per the latest statistics, the literacy rate for women in India is 65.79 percent against 82.37 percent for men – resulting in a net literacy rate for the country at 74.37 percent. Consequently, the contribution of women to work-force is disparaging. According to World Bank statistics, there is only one woman for three men in the Indian labour force, which is better than only nine countries in the world. The vast gender divide extends to factors beyond these statistics.

The resolution of this trend across Indian society require long-term efforts and have no quick-fix solutions. But as the Union Budget is coming up, it is essential to discuss the pertinence of these issues and to argue for a budgeting exercise from the perspective of gender parity. It is perhaps time to strengthen the deliberation on gender budgeting in India.

Gender Responsive Budgeting (GRB) is a globally followed practice that acknowledges the fiscal expenditure with a gender perspective and prorates funds for the gender-specific outcome to address the persistent gender inequality that hinders the overall growth and development of a nation.

The concept is not foreign to Indian budgeting exercises as it was introduced for the first time in the 2001 Union Budget with a vision to address the massive gender inequality in India. Since 2005, the union government releases the Gender Budgeting Statement consisting of two parts. The first part reflects the women-specific schemes in which 100 percent allocation is only for women. The second part reflects pro-women schemes in which 30% of the allocation is earmarked for women. In recent years, the schemes like MNREGA, Beti Bachao Beti Padhao, Sukanya Samridhi Yojna, and Ujjawala Yojna with their focus on women have made significant improvements in socio-economic conditions of women.

For instance, MNREGA has gender-sensitive components, incorporating clauses that specify definitive quotas of beneficiaries as women, a similar pay scale for men and women as well as builds in the provision of childcare facilities within worksites. The outcome of these provision has been reflected in the improvement of female labour force participation, as about 44% of the beneficiaries are women. Further, Schemes like Janani Suraksha Yojana, Ujjawala Yojana have made significant improvements in the health of women by promoting institutional delivery and providing clean fuel, respectively.

It is imperative to consider that benefits of gender-responsive budgeting extend beyond the improvement in the condition of women and also contribute significantly to national growth and development.

As education and health outcomes of women improve, their barriers to entry in joining the workforce would reduce. This would reverse the worrying trend of dipping female labour force participation in India and contribute to the country’s economic growth. It would also make women more financially independent and reduce the crimes against women that begin in the household. Further, many researchers suggest the health of the mother is directly correlated to the health and cognitive abilities of the children. Hence, working on the well-being of mothers through GRB ensures improvement in not just present but coming generations as well.

In India, the Ministry of Women and Child Development (MWCD) is the primary agency for strategic coordination and the effective implementation of Gender Responsive Budgeting (GRB). The funds allocated for GRB are still confined to 5 percent of the public expenditure and shrink to less than one percent of GDP. Apart from the inadequate allocation for GRB, the gap between the allocation and the utilization of funds remains a daunting challenge. According to the government, 89 percent of the Nirbhaya Fund (a fund allocated for women’s safety) have remained unutilized by the States.

In addition to this, in the last decade, approximately 90% of the GRB expenditure has been limited to only four major ministries- Rural Development, Education, Health and MWCD. The impediments in women’s empowerment extend beyond the scope of these ministries. Thus, a holistic approach leading to the convergence of all policies from the perspective of gender is imperative to avoid some ministries working in silos.

Further, for the successful implementation of GRB, the mere allocation of funds will not suffice unless the desired outcomes are attained. Policies should be charted out both in a short and long span. However, data deficiency of implementing agencies from ground zero makes the whole process a zero-sum game. Hence, it imperative to implement agencies to not only lay the foundation for policies, but to be vigilant till the final execution.

Moving forward, there a need to increase the budget allocation of gender-responsive schemes significantly. Moreover, the mere assignment of funds will not suffice unless there is a shift in focus on the measurement of outcome and impact on the ground rather than the expenditure incurred. Further, intersectional policy research should be undertaken to aid evident-based gender policy formulation for it to curb gender inequalities and contribute to overall development.

The article was published with Economic Times on January 31, 2020.