Climate Change: How it led to an Unequal World 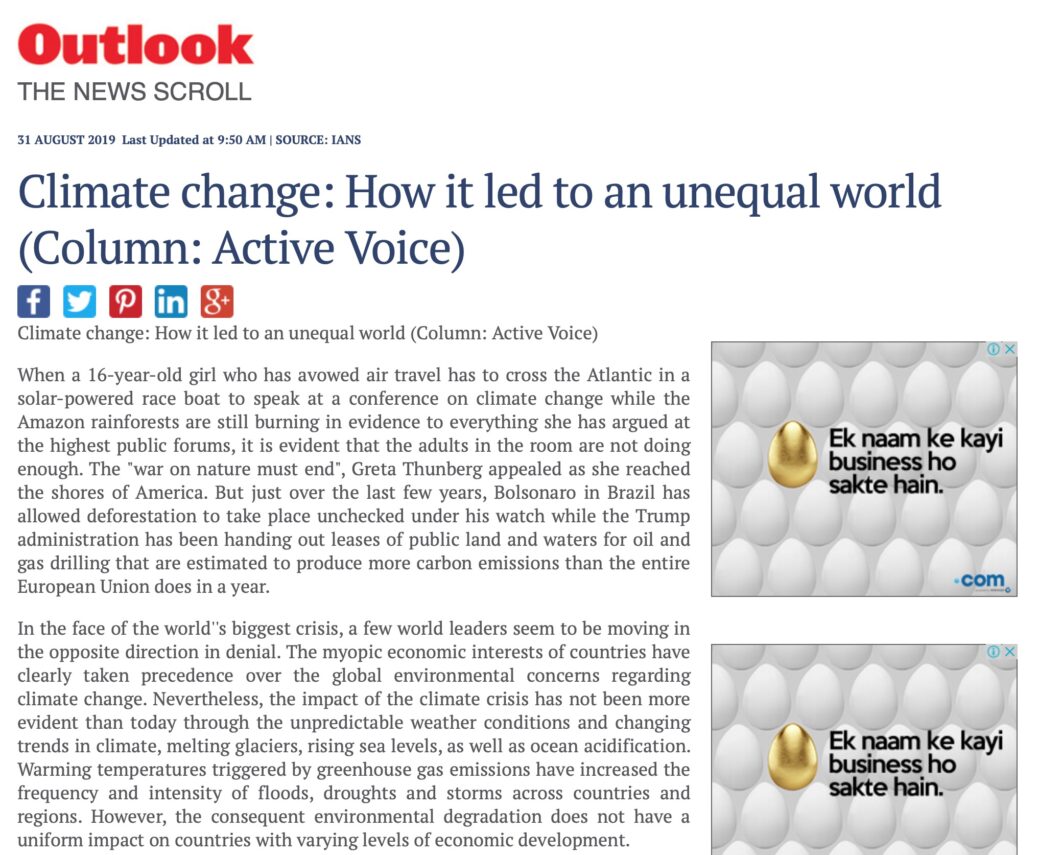 Climate Change: How it led to an Unequal World

When a sixteen-year-old girl who has avowed air travel has to cross the Atlantic in a solar-powered race boat to speak at a conference on climate change while the Amazon rainforests are still burning in evidence to everything she has argued at the highest public forums, it is evident that the adults in the room are not doing enough. The “war on nature must end”, Greta Thunberg appealed as she reached the shores of America. But just over the last few years, Bolsonaro in Brazil has allowed deforestation to take place unchecked under his watch while the Trump administration has been handing out leases of public land and waters for oil and gas drilling that are estimated to produce more carbon emissions than the entire European Union does in a year.

In the face of the world’s biggest crisis, a few world leaders seem to be moving in the opposite direction in denial. The myopic economic interests of countries have clearly taken precedence over the global environmental concerns regarding climate change. Nevertheless, the impact of the climate crisis has not been more evident than today through the unpredictable weather conditions and changing trends in climate, melting glaciers, rising sea levels, as well as ocean acidification. Warming temperatures triggered by greenhouse gas emissions have increased the frequency and intensity of floods, droughts and storms across countries and regions. However, the consequent environmental degradation does not have a uniform impact on countries with varying levels of economic development.

A recently published study by researchers from Stanford University has found that between 1961 and 2010, the poor countries with lowest carbon emissions suffered bigger losses as compared to wealthy countries with highest emissions. The study emphasized that most poor countries of the world are poorer, and the rich countries are richer due to the impact of global warming. The ratio between incomes of the richest 10 percent and the poorest 10 percent of the global population has been estimated to be 25 percent more than it would have been during that time period otherwise.

A similar impact has been observed within countries where people who are least responsible for the climate crisis are the most vulnerable to the risks associated with it. The local communities living in rural parts of developing countries (that are already at a disadvantage) are directly affected due to the consequent impact on agricultural production, water availability, industry and human health. As a result of rising inequality among and within countries, India’s GDP is estimated to be 31 percent lower than it would have been without climate change. By contrast, the GDP of Canada and EU are 32 percent and 9.5 percent higher respectively.

These findings further the ongoing debate on the division of responsibility for causing climate change and its mitigation. Historically, developed countries have had a major contribution to the greenhouse gas emissions which makes it imperative for them to lead the fight against climate change and its adverse effects. The fact that their development which caused climate change muted the growth prospects of the next wave of developing countries puts additional onus on the developed economies to make efforts to address the crisis.

Given that all countries continue with their efforts to promote an ecosystem of sustainable production and consumption, the developed countries should not only take responsibility for their own actions, but also compensate for their negative contribution of the past. In 2015, the Global Climate Fund was created with the objective to support the efforts of developing countries to tackle climate change through investments in the form of grants, loans, equity and guarantees. In addition to financial assistance, transfer of green and clean technologies to the low-income countries could further stimulate their transition to become green economies. Thus, a comprehensive action plan should be advanced to encourage adoption of sustainable alternatives by providing fiscal incentives, regulatory support for resource-incentive sectors and building of climate-resilient infrastructure in developing countries. Stringent laws regarding green subsidies and carbon taxes levied on traded goods and services could initiate the establishment of carbon-free markets. Green innovation through investment in research and technology could also play a key role to find global solutions to the global issue of climate change.

Therefore, global value chains based on cooperation and coordination have the capacity to enhance productivity through innovation-driven production processes.  International forums and bilateral trade agreements should also focus on enabling the transfer of environmentally-sound technologies for renewable sources of energy, water conservation and waste management from developed to developing countries. Lastly, since leaders like Trump and Bolsonaro cannot be expected to alter their stance on climate change, currently it is only the people who need to do their part by changing dietary habits, for instance, until the developed world can lead by example.