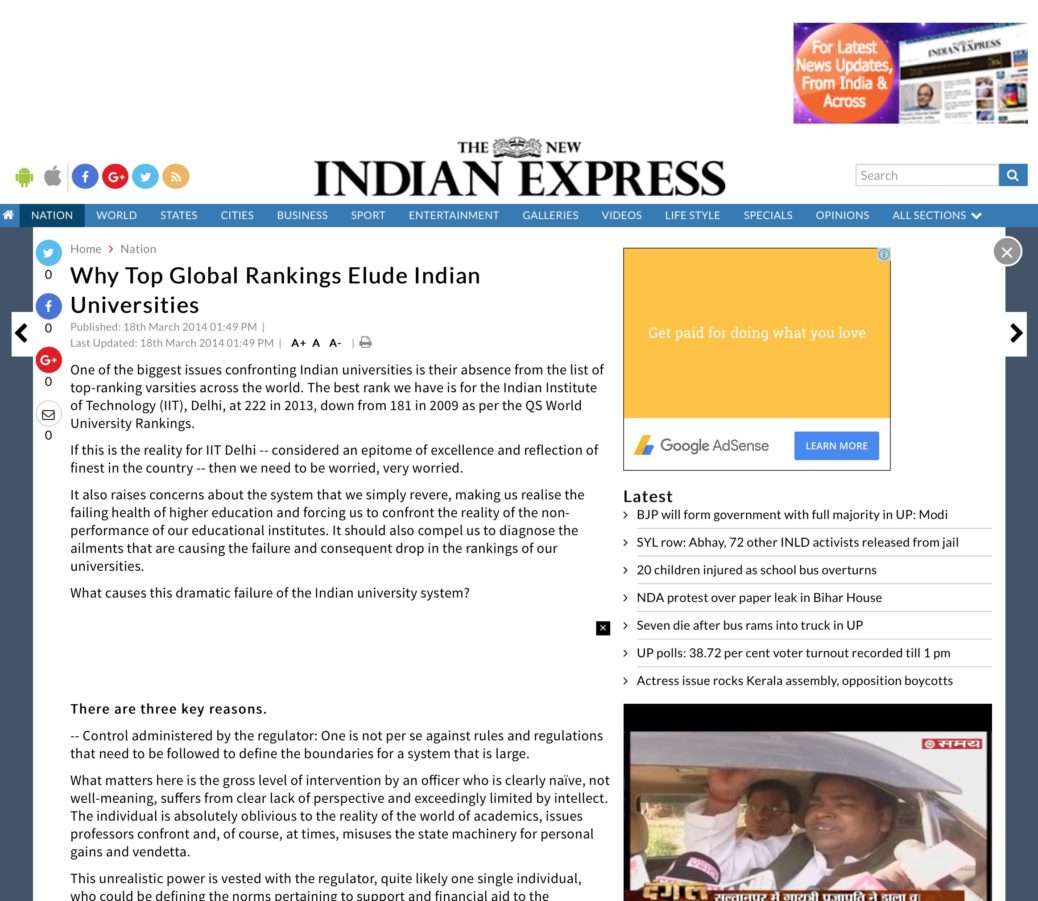 One of the biggest issues confronting Indian universities is their absence from the list of top-ranking varsities across the world. The best rank we have is for the Indian Institute of Technology (IIT), Delhi, at 222 in 2013, down from 181 in 2009 as per the QS World University Rankings.

If this is the reality for IIT Delhi — considered an epitome of excellence and reflection of finest in the country — then we need to be worried, very worried.

It also raises concerns about the system that we simply revere, making us realise the failing health of higher education and forcing us to confront the reality of the non-performance of our educational institutes. It should also compel us to diagnose the ailments that are causing the failure and consequent drop in the rankings of our universities.

What causes this dramatic failure of the Indian university system?

There are three key reasons.

— Control administered by the regulator: One is not per se against rules and regulations that need to be followed to define the boundaries for a system that is large.

What matters here is the gross level of intervention by an officer who is clearly naïve, not well-meaning, suffers from clear lack of perspective and exceedingly limited by intellect. The individual is absolutely oblivious to the reality of the world of academics, issues professors confront and, of course, at times, misuses the state machinery for personal gains and vendetta.

This unrealistic power is vested with the regulator, quite likely one single individual, who could be defining the norms pertaining to support and financial aid to the educational institutions. Incidentally, I remember an interaction in which an official who represented the regulator arrogantly stated that he doesn’t need to learn from anyone and his was the only perspective that was right.

It is quite a misfortune for the academics to be confronted with a reality that reflects a feudalistic mindset and absolute loss of control to the administrator who could be a tyrant and control-freak, something that is clearly the anti-thesis of what the academic world should be.

In the febrile imagination of the administrators they could be creating a positive impact, but end up causing such mayhem in the system that it simply stalls and loses all positive energy.

The focus clearly moves to short-term managerial endeavours that are limited by political agendas of maintaining their positions and supported by boards that are full of uninterested individuals keen only on sitting fees and lacking the ability to understand the plight of the faculty. To maintain their positions, the administrators would as well prioritise research agendas and roles for academics, which is absolutely a regressive step.

— Absence of celebration: Worst is the absence of any celebration of the Indian academic (one operating out of India) and his ideas. What we clearly see is curtailment of thought that could as well be a new vision for the society at large.

The effort to nip ideas in the bud and prematurely aborting them kills the interest or, quite likely, the enthusiasm of the faculty. These ideas, I suspect, are clearly nipped as they could challenge the dominion of the administrators and the regulator.

Often the faculty could be respected thinkers in their domains. They could represent the thought process and the intellect that are often missing among administrators and regulators. But they have lost influence over administrators.

If we accept that the above three issues are symptomatic of what academics suffer from in the country and they, in turn, severely inhibit the growth of universities, then what we need to do is dismantle the existing systems. We need to bring to the fore the idea of faculty-run institutions that are independent in thought and celebrate diverse ideas.

If we don’t take immediate action, we could be putting the final nail in the coffin of this country’s great academic tradition. We should not forget that great universities are run by the faculty and not dominated by administrators and regulators.

Published with The New Indian Express on March 18, 2014