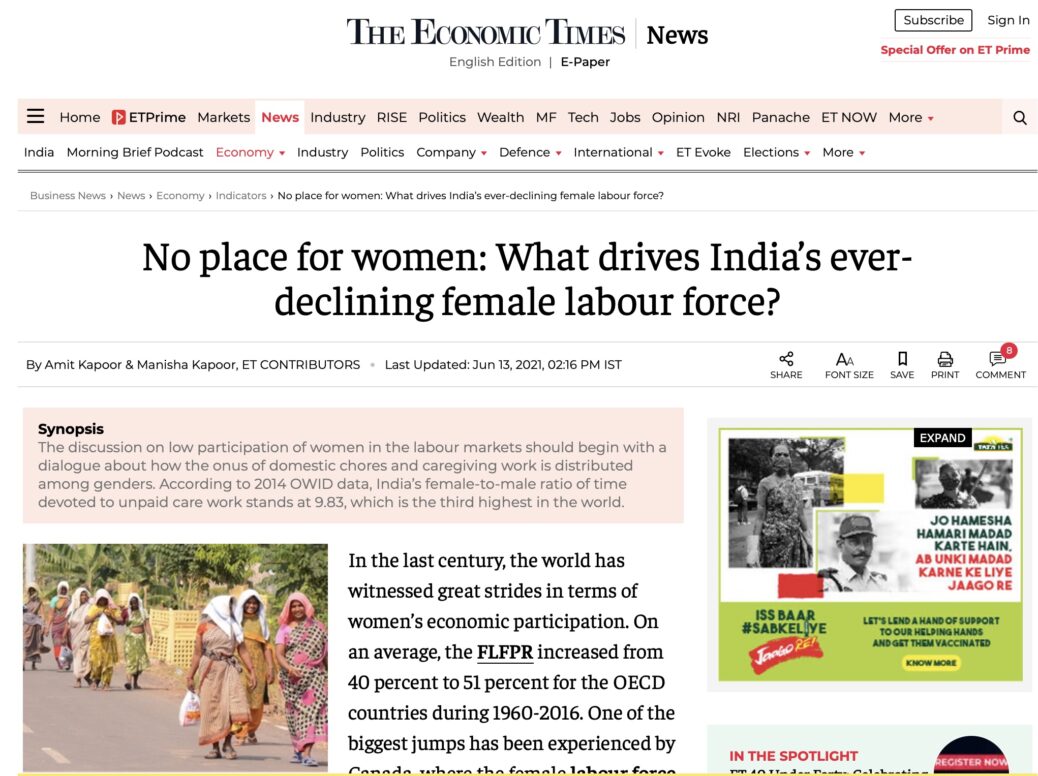 In the last century, the world has witnessed great strides in terms of women’s economic participation. On an average, the FLFPR increased from 40 percent to 51 percent for the OECD countries during 1960-2016. One of the biggest jumps has been experienced by Canada, where the female labour force participation rate (FLFPR) has improved by 45 percentage points during 1911-2016. In fact, OWID estimates suggests that that women labour market participation has progressed significantly over the last century for 32 out of 41 countries.

On the other hand, the Indian subcontinent, home to 17 percent of the world’s women population, is in the company of 9 countries where FLFPR has plummeted. Between 1983-2012, India’s FLFPR fell by almost 4 percentage points. The feature that differentiates India from the rest of the countries experiencing a plunge is that all of them, barring Turkey, started off with high levels of female labour force participation averaging around 58 percent. While India had a FLFPR value of only 31.59 percent in 1983. Furthermore, India’s current FLFPR at 20 percent is among the lowest in the world, with only parts of the Arab world performing worse than the country.

The trends in female participation rates are surprising because they do not trace out a U-shaped curve which is usually observed in economies. Female labour force participation initially declines with growth of the economy as women who were earlier working to make ends meet withdraw from the labour market with rising income. It then rises on account of structural shifts. Despite experiencing these structural changes such as decline in fertility rates and expansion of women’s education, Indian FLFPR is on a downward track.

These statistics are concerning not only from the point of view of women’s liberation and autonomy but also from an economic angle. Studies suggest that improvements in female economic participation not only benefit women but also boost aggregate economic growth. At this stage, when the Indian economy has been derailed by the COVID pandemic, women can play a central role in defining country’s future growth story. It, therefore, becomes crucial to explore the factors that are hindering women’s participation in the labour market.

The discussion on low participation of women in the labour markets should begin with a dialogue about how the onus of domestic chores and caregiving work is distributed among genders. According to 2014 OWID data, India’s female-to-male ratio of time devoted to unpaid care work stands at 9.83, which is the third highest in the world. Therefore, 62.1 percent of the women in 15-59 age group were involved in domestic duty participation in 2017-18. The cultural norms that place the primary responsibility of routine domestic tasks on women, limit their ability to participate in the labour market.

The data also suggests that women engaged in domestic duties report their willingness to work on a regular basis in case it is possible to perform their duties from their premises. Another study conducted by Kabeer and Deshpande in West Bengal reports that 73.5 percent of the women who are currently not working would be interested in taking up job opportunities. However, most of them (67.8 percent) intend to work occasionally in part-time jobs.

The statistics point out how Indian social norms mediates the rate at which female labour supply will respond to economic opportunities. Women are not in a position to disregard their domestic duties and, despite their willingness to work, they can only take up opportunities that allows them juggle between paid and unpaid work.

While most societies in the world developed social norms that dictate acceptable behaviour for women, structural transformation in societies played an important role in breaking those social barriers. However, in India, structural transformation led to a high share of the population working in informal sector and setting up small enterprises. These informal jobs and their lack of social security make people highly dependent on caste and kin networks for economic support in times of crisis and conform to society’s traditional standards instead of challenging them. This acts as one of the main impediments to female participation. These norms also place significant barriers on female mobility. For instance, NFHS data suggests that only 54 percent of the women are allowed to visit a nearby market alone. The solution is to provide jobs that are near households and provide enough flexibility to women or to provide jobs with high enough wages that it impacts female mobility and drive them towards regions that have employment opportunities.

Apart from the supply side issues, there is a high unmet demand for the female labour supply in the country. The jobless growth of the Indian economy has impacted women more severely than men. During the period 2012-2018, 65 million men and 63 million women were added in the Indian working age population. The LFPR for men remained stagnant while the LFPR for women observed a downward trend depicting the job market was able to absorb the growing number of male workers but it was not the case for female workers. Women have borne the brunt of this growth mainly because of two reasons. First, the mechanisation of agriculture including seed drills, threshers etc have reduced manual jobs that were mostly performed by women. Second, India’s manufacturing sector has not created labour intensive jobs that could be taken up by women who have been displaced from agriculture.

Thus, the Indian growth experience is fraught with complexities. On the one hand, labour-intensive growth and structural transformation along with formalisation have been missing, while on the other, caste dynamics and social norms still dictate labour mobility. A mix of these unique aspects of the Indian economy have resulted in skewed gender diversity in the workplace. The loss due to this market failure does not only lie with Indian women but the economy as a whole. After all, half of the population that could be contributing to the country’s growth is unable to do so.

The article was published with Economic Times on June 13, 2021.