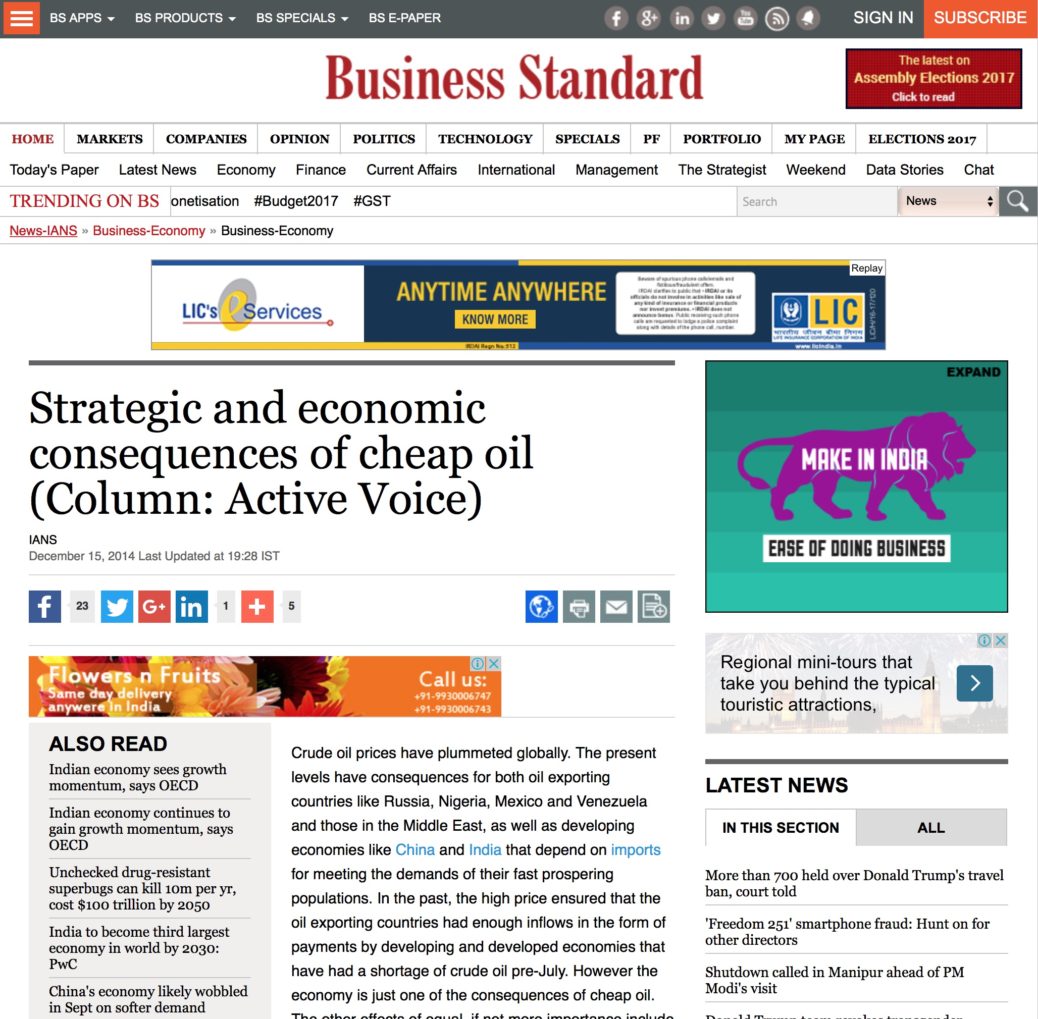 Crude oil prices have plummeted globally. The present levels have consequences for both oil exporting countries like Russia, Nigeria, Mexico and Venezuela and those in the Middle East, as well as developing economies like China and India that depend on imports for meeting the demands of their fast prospering populations. In the past, the high price ensured that the oil exporting countries had enough inflows in the form of payments by developing and developed economies that have had a shortage of crude oil pre-July. However the economy is just one of the consequences of cheap oil. The other effects of equal, if not more importance include geopolitics and strategic alignment.

The Organization of Petroleum Exporting Countries (OPEC) basket that contains 12 grades of crude is quite representative of the price movement. This has fallen close to $40 in the past six months – from $108 a barrel in July this year to $61 on December 11. This fall is probably the steepest decline in atleast the past 14 years and is attributed to the discoveries of newer techniques for extracting shale oil that have resulted in an increase in the production of US crude. It has led to global prices of crude oil going into a tailspin, which has consequences that are both strategic and economic.

The fall has augured well for India in strengthening ties with its long-standing defence equipment partner and supplier Russia as witnessed during the recent visit of the President Vladimir Putin. The Russian economy, which is badly hit by EU and US sanctions amid collapsing crude oil prices, seems keen to pivot the sanctions with growth opportunities in the rising Asian economies, most prominently those of China and India.

Prime Minister Narendrs Modi, alongwith President Putin, strengthened the two countries’ engagement on energy as well as in crucial areas of trade and defence. Modi declared post his meeting with Putin that Russia plans to build at least 10 more nuclear reactors in energy-starved India. In the oil and gas sector, Russia’s Rosneft entered into a 10-year multibillion-dollar agreement with India’s Essar Group, which is planning to import a whopping 10 million tonnes (mt) of crude oil a year for 10 years. At present, the market value of the deal is estimated at $40 billion over a 10-year timeframe. Also, apart from these two major deals, cooperation in energy also included a $1bn joint venture to support hydroelectric power projects in India. In our opinion, all these are positive developments for securing India’s energy future.

In the area of trade, the joint statement issued by Modi and Putin mentioned increasing the turnover of goods and services to $30 billion by 2025 – roughly three times the current figure. Similarly, two-way investments are targeted to increase to $15 billion each way up from $4 billion in 2012. Significant headway was also made in the area of diamond trade with Russia and India trying to reconfigure global value chains to benefit their economies.

In the field of defence production too, Russia seemed keen to manufacture its most advanced military helicopter in India and agreed to advance a long-delayed project to develop a joint fighter jet with India. These agreements are is in line with the Indian government’s commitment to Make in India.

While we agree that falling crude prices cannot alone explain Russia and India’s vigorous positive engagement, we do believe cheap oil does act as a catalyst, especially when Russsia’s diplomatic ties with other countries seem a bit strained at present. Thus, in our opinion, the geopolitics of oil goes far beyond the economic aspect of cheap oil. While we do believe that falling crude prices will benefit India in economic terms. We also think it will open up opportunities for active engagement in the strategic sphere.

On the economic aspect, government sources believe that the overall impact of cheap crude oil could help Finance Minister Arun Jaitley to reap a fiscal windfall of at least $12 billion when he presents his 2015-16 budget in February. This is a considerable amount and may enable him meet his predecessor’s fiscal deficit target of 4.1 percent of the GDP. If Jaitley can achieve this, it will go to ease inflation further, most likely spurring the RBI for a rate cut. But before that, US President Barack Obama’s visit will, hopefully, help one derive some conclusions about India’s strategic alignment. In the domestic sphere, a rate cut, along with the other proposed reforms like the Goods and Services Tax might just be the change in gear that the Indian economy presently is looking for.

Published with Business Standard on December 16, 2014.