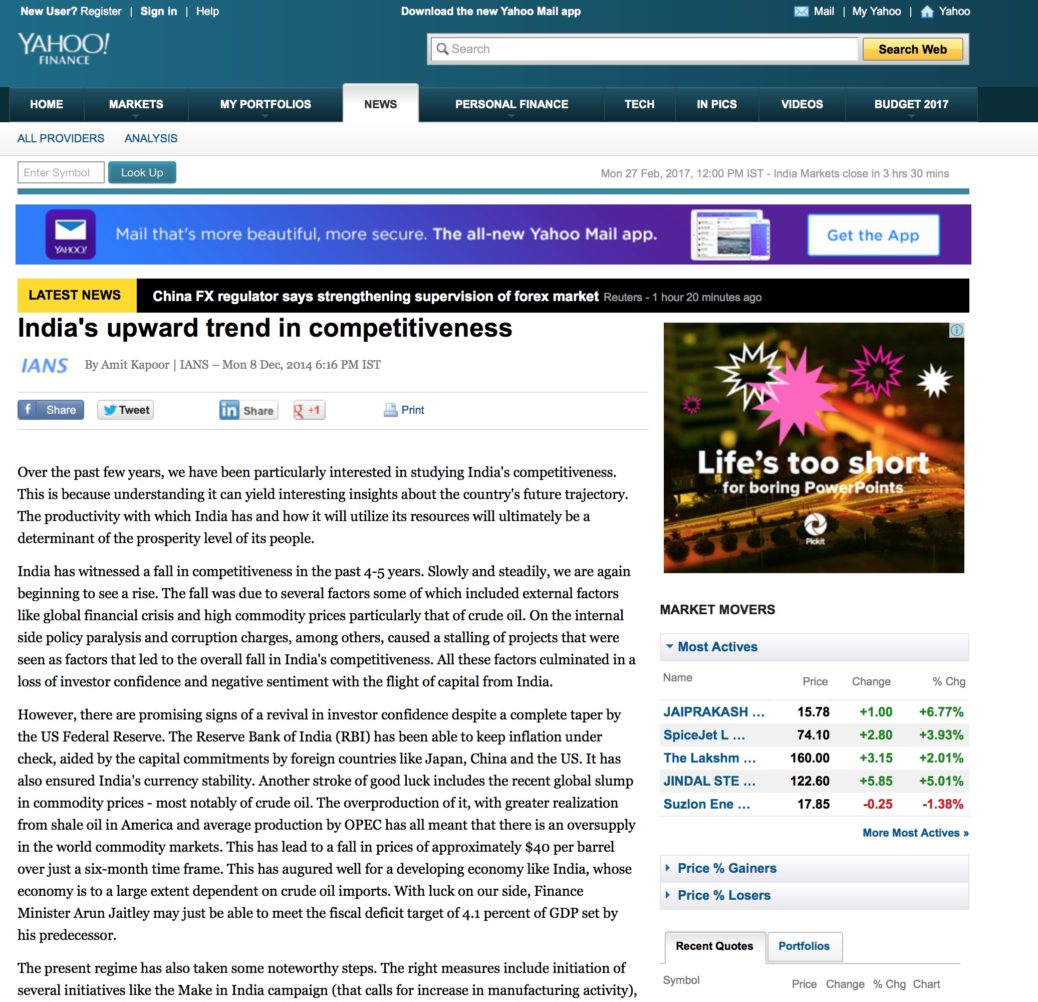 Over the past few years, we have been particularly interested in studying India’s competitiveness. It is because, understanding it can yield interesting insights about the future trajectory of our country. The productivity with which India has and will utilize its resources will ultimately be a determinant of the level of prosperity of the people who reside in it.

India has witnessed a fall in competitiveness in the past 4-5 years. Slowly and steadily we are again beginning to see a rise in it. The fall was due to several factors some of which included external factors like global financial crisis and high commodity prices particularly that of crude oil. On the internal side policy paralysis, corruption charges, etc., causing a stalling of projects were seen as factors that lead to the overall fall in India’s competitiveness. All these factors culminated in a loss of investor confidence and negative sentiment with the flight of capital from India.

However, there are promising signs of a revival in investor confidence despite a complete taper by US Federal Reserve. The Reserve Bank of India (RBI) has been able to keep inflation under check aided by the capital commitments by foreign countries like Japan, China and US.  It has also ensured India’s currency stability. Another stroke of good luck includes, the recent global slump in commodity prices most notably of crude oil. The overproduction of it, with greater realization from shale oil in America and average production by OPEC has all meant that there is an oversupply of it in the world commodity markets. This has lead to fall in prices of approximately 40 USD per barrel over just a six-month time frame. It has augured well for a developing economy like India whose economy is to a large extent dependent on the import of crude oil. With luck on our side, the Finance Minister may just be able to meet the fiscal deficit target of 4.1% of GDP set by his predecessor.

The present regime has also taken some noteworthy steps. The right measures include initiation of several initiatives like: The ‘Make in India’ campaign (that calls for increase in manufacturing activity), ‘The Swacch Bharat’ campaign (that seeks to create a clean India with social consensus and awakening), ‘The Jan Dhan Yojana’ (which seeks to open bank accounts for financial inclusion of masses), etc. Clubbing of ministries during the first cabinet formation was a good idea as it tended to reduce government and bureaucratic friction, between various ministries. Similarly, the plan to increase FDI limits in defense and insurance sectors have all meant that investors feel comfortable investing in India. Also, the commitment to a market-oriented process by a calibrated disinvestment in government-owned enterprises is also seen as a step in the right direction. The approach to making states partners in development and not as mere beneficiaries of the process of economic development will in the long term ensure that India’s overall growth and competitiveness is sustained. To the effect the need to re-look at institutions like planning commission is also a good starting point. Some reforms are on the anvil, like the replacement of various indirect taxes by a single goods and services tax (GST). In our opinion, it should see the light of the day soon as it could have a transformational impact by seamlessly integrating markets across India into a coherent whole. With respect to the ease of doing business too, the government seems committed to reducing ‘red tape’ and providing investors with a ‘red carpet’. How much of it’s commitments get realized will depend on government and people’s implementation capability in the years ahead.

There will be several risks along the way that may arise in case policymakers are not able to decide on the future course of action. These fall in our opinion in 5 broad areas of risk namely Societal, Economic, Geopolitical, Environmental and Technological. In the case of societal risks problems arising due to overpopulation, diseases, food shortages and lack of education are seen as major challenges. Economic risks would entail inability of government to curb fiscal deficit (in case crude oil prices rise) giving rise to an inflation problem, etc. Similarly, geopolitical risks include the threat of terrorism and failure to resolve conflicts in border areas in a peaceful manner with neighboring countries. Environmental risks are considerable in India, and they have resulted in rivers and air being extremely polluted. In the years ahead sustainable development should be the path forward with coexistence of factories, forests, and farmland. The technological risks include risks like cyber security, risks arising due to technology like nuclear plants, etc. Adequate safeguards and standards for these will hold the key to a disaster free and sustainable future.

If policymakers in India take steps to mitigate, if not eliminate risks, it will surely help India move from a factor-driven stage of the economy to an investment and finally to an innovation-driven stage. It will also involve imparting genuine innovative skills to its ever-increasing workforce. Imparting these will not help India compete successfully in the global economy presently but will ensure that its competitiveness is sustained over a longer time frame.

PS: The piece draws from a forthcoming report on India’s Competitiveness that has been co-authored by the authors of this piece. A large portion of our thinking in the report and this piece has evolved by looking at data and insights over the past few years. The report contains sections that mention factors, which are seen to be instrumental in shaping India’s overall growth and competitiveness.

Published with Yahoo Finance on December 8, 2014.