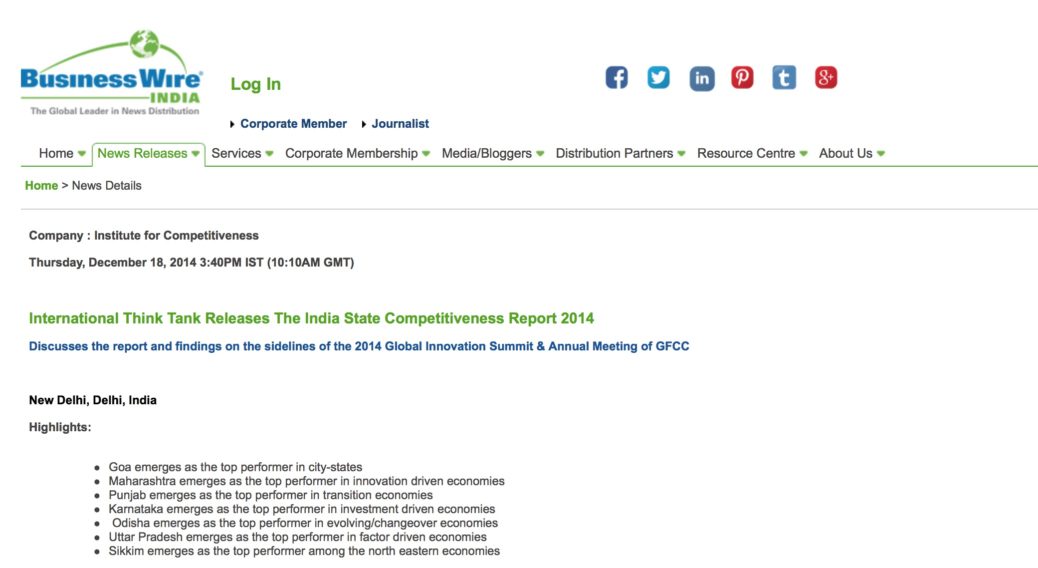 The report categorizes the states under seven heads of – City States, Innovation Driven Economies, Transition Economies, Investment Driven Economies, Changeover Economies, Emerging Economies and North Eastern Economies. The stage of economies helps compare states at a similar level of development of the economy. This is helpful in understanding the different agglomerations affects and take policy actions for improving the overall level of competitiveness of a state within India.

The State Competiveness Report is beneficial to both corporates as well as state governments. For corporates the main benefit lies in fundamentally understanding their location options as well as re-directing their choices accordingly. For state governments the study suggests policies that local and state governments can employ to improve growth and competitiveness within a specific region. The broad level strategies that all states can employ to improve competitiveness include having a focus on better governance, greater investments in infrastructure, bettering the education outcomes and improvements in healthcare delivery.

Commenting on this year’s report and ranking, Dr. Amit Kapoor, Honorary Chairman, Institute for Competitiveness said, “The remedy to the growth conundrum of the India lies in the enhancement of the competitiveness quotient of the states, for they collectively comprise the whole nation. The focus of states and policy makers should be on wealth creation that is economically viable, environmentally friendly and at the same time addressing the concerns of all the communities involved. This is essential for making India globally competitive in all sectors of the economy.”

The most critical element that comes out of this year’s report is that states’ will have to create unique visions basis their individual resources and implement policies for enabling that vision. These individual policies will in turn help build resilience and enable India to become more competitive as a nation and help in its growth, development and prosperity in the years to come.

To acquire a copy of the detailed study please write to neera.vohra@competitiveness.in