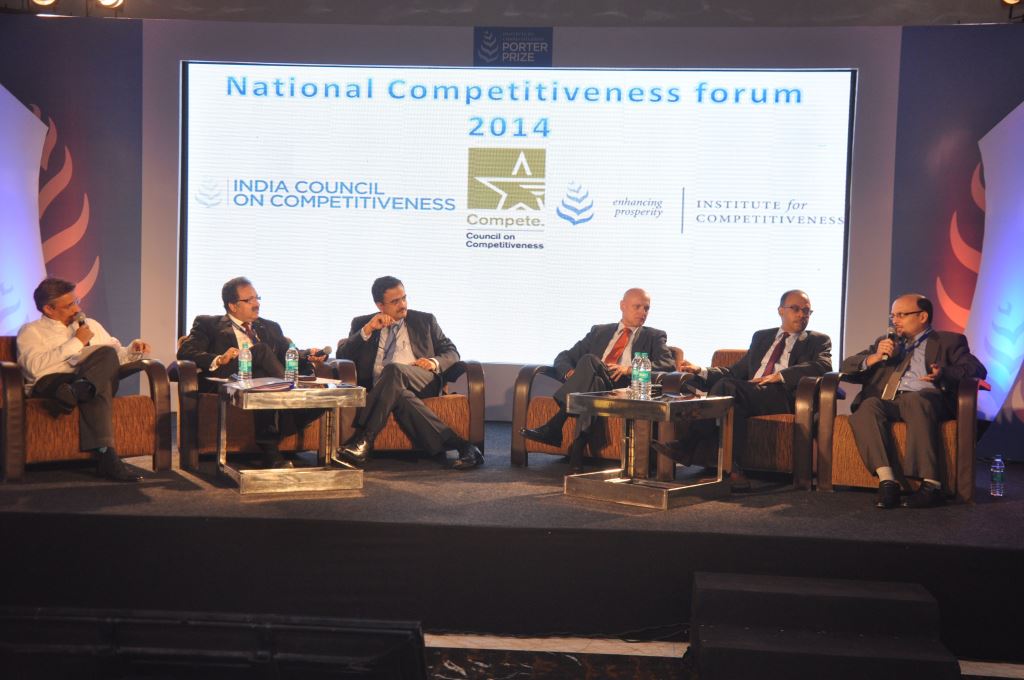 Deborah L. Wince-Smith, President and CEO, US Council on Competitiveness participated in the forum

India’s National Competitiveness Forum, the flagship event of India Council on Competitiveness held on September 26, 2014 at Radisson Blu Plaza in New Delhi was a huge success. The day started with an opening address and keynotes. Followed by thought provoking panel discussions and other deliberations by influential leaders.

Wilfried Aulbur, Chairman, India Council on Competitiveness & Managing Partner & CEO, Roland Berger gave the opening address by saying, “We have gathered here to have a dialogue on what will drive India forward and to discuss competitiveness and innovation and how we can make it better. We want this dialogue to eventually reflect in policy, guidelines, industry competitiveness benchmarking and our ability to judge our peers in India and at the global level. This forum facilitates coming together of industry to discuss how to better the competitiveness of the nation and I welcome you all on board.

Followed by a keynote by Honorable Deborah L. Wince-Smith, President and CEO, US Council on Competitiveness. She said, “New prime minister has a vision to transform India into a manufacturing future and move out of the commoditized manufacturing of 20th century and look ahead. Any issue you want to look at in the functioning of the Indian Council of Competitiveness can to be looked at from the perspective of Talent, Technology, Investment and Infrastructure. They can be looked at as interconnected systems that one needs to modulate and grow depending on what your needs are.”

The first session of the forum “Economic Geography and Competitiveness” emphasized on the importance of regional competitiveness and the requisite to build well-connected and planned infrastructure so as to control the widening demand-supply gap. Thus managing the inevitable urbanization and to take the country in the direction of competitiveness.

Subsequently, Mark Goyder, Founder Director, Tomorrow’s Company while delivering his keynote stated, “Sanskar’ I understand is a Hindu concept which talks about a process which transforms a person in an outstanding and ideal personality by eradicating the negative mental tendencies within him by inculcating human values and qualities which make him more dynamic, discreet, duty conscious and responsible towards himself as well as family and society. Entrepreneurial India today needs Sanskar.”

The session on the theme of “Technology and Competitiveness” focused on the idea of technology adoption and its ability to foster inclusion, innovation and competitiveness. Panelists discussed about the ways in which technology can change the ways of doing business and can give them an edge in comparison to their peers.

Focusing on the importance of sustainable Business Models, Maarten Koomans, Chief Global Healthcare & Global Clients, BusinesModelsInc pointed out that the rules of business that have changed over the years, through newer technology, newer distribution channels and newer products. He talked about a mantra to compete in the market by suggesting that firms should not focus on the product, but on the business models, by identifying the customer segments they wanted to serve, and then acquire and retain the customers.

Roberto Alvarez and Chad Evans addressed the attendees in the session “Competitiveness Decoder” and demonstrated the first of-its-kind, data based tool developed in order to, analyse and visualize the key drivers of a nation’s competitiveness. They said, “We been on a journey together on what competitiveness means, what drives competitiveness and can we visualize that and with that visualization can we learn lessons.”

Discourses were also made on themes like Enabling Industrial development and Realigning Institutions. They advocated the need of turning India into a manufacturing hub and even applauded the ‘Make in India’ campaign recently launched by the Honorable Prime Minister. Points were raised on the poor ranking of India on the ease of doing business and the role of governing institutions that bring about a change in the economic, societal and political arena of the country.

About India Council on Competitiveness