Porter Prize recognizes the Strategic Acumen of Corporates in India 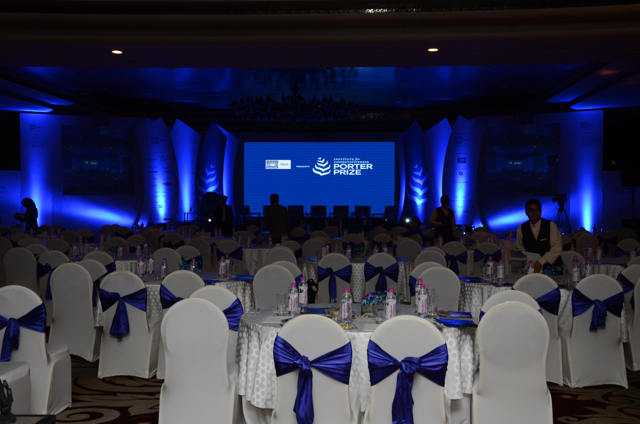 Porter Prize recognizes the Strategic Acumen of Corporates in India

Porter Prize was successfully held on October 11, 2013 at The Leela, Gurgaon. It is named after the renowned thinker, Harvard faculty member and Father of the modern strategic field Professor Michael E. Porter. It commenced with three panel discussions. Followed by a talk by the Strategy Guru Michael E. Porter where he addressed the Indian corporates and delivered an intriguing speech. It was then followed by the award ceremony wherein Padamshree recipient Dr Pritam Singh and Shri Uday Pratap Singh, Honourable Member of Lok Sabha gave awards to the Porter Prize winners. The companies that made it to the winner list are

To know more about the Porter Prize 2013 Winners, visit http://www.porterprize.in/winners-2013/

Professor Porter delivered an extremely persuasive talk that illumined the audience mind on what precise role business ought to have. Averring his firm belief in governments world over and in various NGOs, he stressed the need for business to go beyond the low impact usual philanthropy mode of Corporate Social Responsibility and delve in the realm of creating shared value. He made an emphatic case of businesses to identify social problems, build profit-generating self-sustaining business models that solved these problems, and then scaled up the same. Economic Value Creation is what businesses have to do, as almost 85% of societal resources are managed by them. He exhorted Indian businesses to gain sophistication and raise the bar, if India has to set exemplary leadership model for the world community. Prof. Porter expressed delight on seeing the legacy of Porter Prize carried on, expressing his urge to shake hands with the winners.

Dr Devi Shetty outlined Narayana Health’s crusade in providing affordable high quality healthcare services to Indians. The audience gave an appreciatory response to his talk of bringing an 800 $ heart surgery to the patients; wherein he hinted at one-third India being genetically prone to heart issues. His practical hands on approach to making state of the art healthcare possible for all beyond affluence, as in having 300 bed hospitals built at nominal 6 mn $ investments was an eye opener. The commitment to such noble cause was indeed laudable.

Mr Nadir Godrej brought a whiff of freshness, taking the prosody mode, a full thrilling and striking poetic imagery laden talk that was replete with mature humor and purposefulness Godrej group has demonstrated in carrying the social charter forward.

Padamshree recipient Dr Pritam Singh, the Chief Guest, highlighted the unmistakable role leadership possessed in today’s economy; talked of crises of ethical governance, ecological imbalances, and water scarcity and cautioned CEOs from adopting a General Manager’s agenda. He also questioned the rationale of disproportionate compensations for CEOs. He shared a beautiful analogue for leaders – to be able to hear sounds of unborn children and to be able sense sunrays warming petals of flowers.

Shri Uday Pratap Singh, Honourable Member of Lok Sabha, in his characteristic frank style, talked of what competitiveness should mean for India – to be able to provide fundamental amenities and services to all citizens, of whichever economic or ethnic background. He asked for honest governance by representatives and sought corporate’s active participation in controlling burgeoning population.

Dr K Ramamurthy, CEO, Projects , Emaar MGF Land Ltd. as a key speaker in the panel discussion on ‘Fit and Synergies’ said; “We have to see that people matter in our organization. We have to foster personal growth and be an organization which makes a difference. We can beat competition by retaining talent. It’s a combination of this, which is important. We at Emaar MGF are delighted to partner such a prestigious event, and look forward to being associated with it in the years to come.

Dr. Amit Kapoor, Institute for Competitiveness, India gave the closing remarks by thanking Professor Porter in being a core part of Porter Prize 2013 event and to the entire Institute for Competitiveness family for putting in the efforts to come up with such a grand and successful event. He shared the robustness of the process in shortlisting the most deserving applicant firms against various categories of the prize. A profuse thanks was expressed to Prof Porter for delivering an amazingly inspiring talk and for responding to various questions at length. He ended the ceremony with the statement “Let India’s Competitiveness Surge by Leaps and Bounds”.