The Capital of India, New Delhi has won ‘The Most Competitive City State’ award by surpassing other city-states in the country. 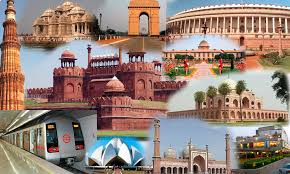 The Capital of India, New Delhi has won ‘The Most Competitive City State’ award by surpassing other city-states in the country. New Delhi scored high at number one position in factor conditions and related & supporting industries..

The Capital of India, New Delhi has won ‘The Most Competitive City State’ award by surpassing other city-states in the country. New Delhi scored high at number one position in factor conditions and related & supporting industries. It was adjudged to have the best factor conditions such as physical infrastructure, communication facilities, administrative environment, financial infrastructure and scope of innovation. New Delhi has been successful in grabbing the number one spot on the related & supporting industries pillar, which comprises sub-pillars like supplier sophistication and Institutional support which made Delhi emerge as a state that provides Positive Environment for the Businesses to Prosper.

The report is based on the detailed study wherein the States are critically evaluated on various parameters of Microeconomic Competitiveness are based on in-depth research and analysis done by Institute for Competitiveness. The States were categorized under following six heads-

The methodology/framework used for the study is the Microeconomic Diamond Model laid down by Michael E. Porter. The model is widely accepted in the world and assesses the competitiveness of a region or domain based on specific benchmarks. The core of the model is based on four pillars of Competitiveness that is, factor conditions, demand conditions, context for strategy & rivalry and supporting & related industries. These four pillars are interlinked with one another and are instrumental in determining the overall Competitiveness of any Economy.

The elated Hon’ble Chief Minister of Delhi, Shrimati Sheila Dikshit while receiving the award from Dr. Amit Kapoor, Hony. Chairman of Institute for Competitiveness said, “Delhi is the epicenter of all the business activities that take place in North. Delhi being the capital of India has a very crucial role to play. In addition, whenever we talk about a country the first thing that comes to our mind is its capital e.g. for England its capital London, for France its capital Paris and for India it’s capital New Delhi. Delhi is not a state but a seat of Union Government so it is extremely important for the polity of India.”

The other states awarded were:

• PUNJAB – which got the top position in ‘Transition Economies’

• ANDHRA PRADESH- was ranked number one in the ‘Investment Driven Economies’

• BIHAR – received the award for being the best Emerging Economy and

• RAJASTHAN – got the award for being the best in Changeover economies.