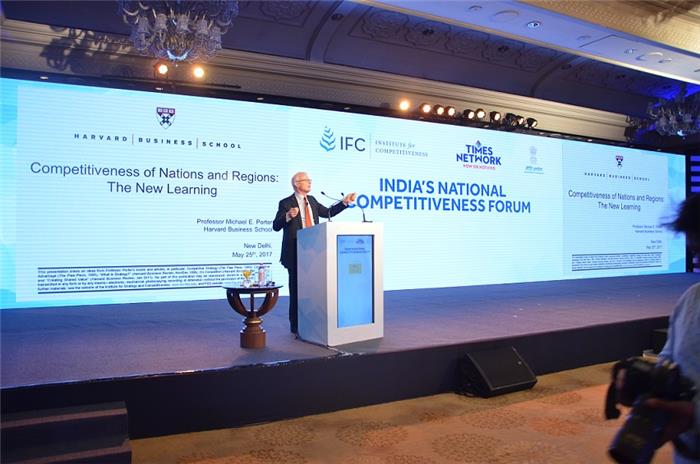 Harvard Business School Professor and leading management thinker, Michael E. Porter delivered two keynotes at the National Competitiveness Forum. The event was organised by Institute for Competitiveness, India on May 25, 2017 at The Taj Palace, New Delhi.

In the morning, Amit Kapoor (Honorary Chairman, Institute for Competitiveness) welcomed the audience and set the agenda for the day.

The forum kicked off with Bibek Debroy’s keynote on the role of Indian states to improve India’s competitiveness and social progress. He highlighted the importance of performance rankings of states by DIPP in enhancing the competition among states and its desirability for the country’s overall competitiveness. However, he said that a serious paucity of data at the state and district level is impeding informed policy making.

Following Debroy’s address, Piyush Goyal (MoS with Independent Charge for Power, Coal, New & Renewable Energy and Mines). He talked about Prof. Michael Porter’s views and their relevance to India. He also described how the functioning of the government is helping enhance the competitiveness of the Indian economy. “We are working on improving outcomes, not outlays”, he said. Government has to be pro-business to be pro-poor.

Next, Professor Michael E. Porter delivered a strong keynote on “The Idea of Competitiveness”. He began by outlining the determinants of competitiveness in an economy. Enhancing productivity of existing firms and workers and higher participation of citizens in the workforce are the main challenges an economy needs to work upon to stimulate competitiveness. However, the latter has been a major challenge for the Indian economy. He also chalked out the steps that the Indian economy needs to take to boost competitiveness. According to him, a higher private participation is necessary for greater prosperity. However, India has had a history of an aversion to support to the private sector, especially from the government. He appreciated the government’s efforts to change this trend over the last few years and stressed that “India cannot be successful unless businesses in India are successful”.

This was followed up with an interaction between Naveen Jindal and Professor Porter based on his views on competitiveness. The conversation revolved around the role of the government in ensuring business competitiveness.

The session was followed up with an interesting panel discussion on “Enhancing India’s Competitiveness”. The panel discussed the role of Indian states in boosting the country’s competitiveness. It, then, moved on to a more general discussion around the application of Professor Porter’s views for the general business environment in India. Srivatsa Krishna (Chief Executive & Secretary, Coffee Board, Ministry of Commerce, GoI) concurred with Porter’s view of how an economy needs to improve upon its micro and macroeconomic constituents and explained how his ministry is practicing it. Krish Iyer (President and CEO, Walmart India) felt that India needs to restructure its labour laws to improve competitiveness. There was also a discussion around the future of job growth in India given the changing nature of work and growing joblessness. Ganesh Natarajan (President, HBS Club of India) stressed that re-skilling is the key to kick-start job growth.

The panel discussion was followed up with Wilfried Aulber’s keynote on India’s competitiveness based on his book with Dr. Amit Kapoor, Riding the Tiger. He discussed the role of six success levers that are needed to be focussed on to ensure success of companies in India’s volatile business environment. These include: operational excellence, innovation, choices and trade-offs, alignment, leadership and courage, agility and serendipity.

Following Wilfried’s address, Santosh Babu (Founder & Chairman, OD Alternatives) delivered a fascinating keynote on aspects of human personality and development. He described three divides that India and Indians suffer from: ecological, social and spiritual. According to him, three shifts are necessary to overcome these divides: from ego systems to eco systems; from default context to created context; and leading from the future.

The next session featured an informative panel on “The Importance of Measurement”. Michael Green (CEO, Social Progress Imperative) highlighted the importance of an instrument of measurement for social outcomes in India. Nitya Khemka (Director, Nand and Jeet Foundation) agreed for the need of an indicator to guide public policy. The panel also pointed out that the development of an index for social progress needs to be followed up with commensurate action on forward linkages on social outcomes.

Following the panel, Michael E. Porter presented a keynote on “Social Progress”. He shared his views on the need for social progress and its bi-directional relationship with economic progress. He stressed on the need of a systematic way to measure social progress and, then, introduced the Social Progress Index that is an aggregate index of social and environmental indicators that capture three dimensions of social progress: Basic Human Needs, Foundations of Well Being, and Opportunity. India ranks 98 among 133 countries in the SPI. This underscores the need for a similar measurement of an index for social progress in India and considering the variation in social performance across India, the index needs to be measures at the state level. He followed this up with the introduction of a discussion paper on Social Progress Index for Indian states.

Lastly, Porter’s address was followed by a keynote by Amitabh Kant (CEO, NITI Aayog). He highlighted the lustrous growth of the Indian economy amidst slow-moving global economies. Echoing Debroy’s views, Mr. Kant stressed on the importance of rankings of states for improving their competitiveness. He also added that apart from rankings there is a need to “name and shame” states based on their performance. Further, he said that for sustained growth of the Indian economy there was also a need to make rapid improvements on health and education indicators. In other words, social progress is vital for economic growth. He produced data evidence on the states and districts that need major improvements on these aspects. He added that NITI’s aim is to do the same by picking up three low-performing states on these indicators and hand-hold them towards betterment.