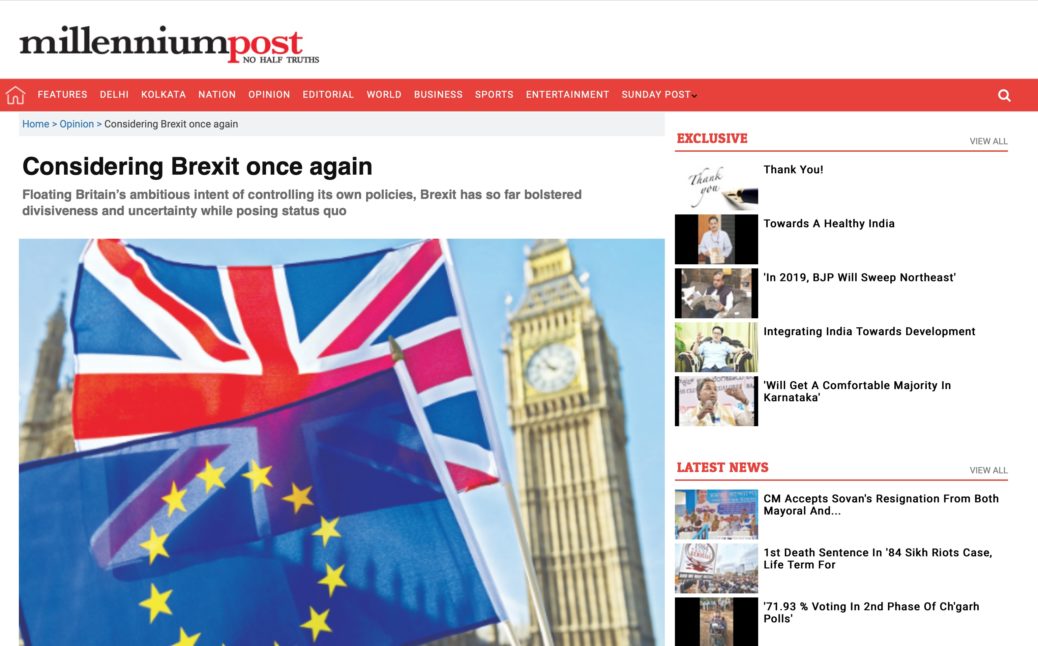 Divorces are always messy, but none have so much at stake as the separation of Britain from the European Union (EU). After almost two-and-a-half years since 52 percent of the British decided in favour of a Brexit, Theresa May has managed to draft a deal that aims to withdraw the country out of the Union before the cut-off date of 29 March 2019. Even though the deal has been begrudgingly passed by May’s Cabinet, there are virtually no supporters for it on either side of the Brexit debate.

Britain has about four ways to go about Brexit: a hard Brexit, a softer Brexit, a sketchy middle ground where May has ended up with the current deal, or simply, no deal, where Britain drops out of the EU after the cut-off date and ends up reverting to standard international trading rules. The latter case is simply catastrophic where tariff and border checks would immediately be put in place and movement of people would become restricted.

A hard Brexit would also imply UK making a definitive split from EU ending its membership in the single market, customs unions and the court of justice. This would give UK more freedom to set its own rules and regulations. A softer Brexit would, in turn, imply lesser change from the status quo. A really soft Brexit could even involve the possibility of UK staying on in the single market or customs union.

The major complication in coming to an agreement arises from the case of Northern Ireland. The region, which is a part of the United Kingdom (UK), would spiral into sectarian violence if it is separated from Ireland through physical barriers or checkpoints, or in other words, a hard border, as it would limit the flow of people and goods between the two regions. The Irish-Northern Irish border has been open since 1998 after the Good Friday Agreement was ratified to bring peace to the region after decades of violence. However, a clean Brexit would require imposition of hard borders between UK and EU, which implies a hard border between Northern Ireland and Ireland as the latter is a part of EU. Such a scenario would eventually end in rising tensions, which everyone wants to avoid at all costs.

So, the Brexit dilemma lies in coming to an agreement that retains the integrity of the UK and the Good Friday Agreement. May’s deal tries to circumvent it by letting UK stay within the EU’s customs area, which would imply staying in the EU single market and avoiding hard borders, while allowing UK to make independent trade deals with other countries. As such a deal would not include the imposition of any hard borders, the free flow of goods and people between Ireland and Northern Ireland would remain unchanged.

However, it is obvious why such a deal has appeased no one. The pro-Brexit camp feels that the terms of the draft deal violate the very meaning of Brexit, which was to let UK take back control of its own policies. May’s plan forfeits the influential role that UK played in the EU while making it a mere rule-taker of the union. The ability to negotiate its own trade deals would recover only a fraction of the cost of Brexit by the government’s own calculations. Meanwhile, for the Remain-camp, the deal is far worse than the status quo for almost the similar reasons. The two factions have unanimously united over their dislike for the draft deal.

Such reactions should have been expected. It was evident that no one would have been satisfied with the final outcome of such a divisive issue. The very fact that no party is satisfied makes it the least unreasonable compromise. But at this stage there is a strong case for a referendum on the exit deal. The Brexit votes were won by a very narrow margin at a time when the terms and the cost of the move were not known to the voters. There was a clear democratic deficit, which needs to be filled.

The idea of Brexit that was sold to the masses at the time was that the country would somehow manage to seize control of its policies and achieve higher prosperity in the process without incurring any significant economic costs for itself. The deal that has been chalked out in these two years is nothing close to these promises of the Leave campaigns. It is highly likely that the deal will not pass through the British Parliament itself but now that the extent of economic pain and long-term repercussions of Brexit are becoming clearer, it is vital to get a sense of the public opinion about the matter before the only option of a no-deal remains. The latter outcome would spell catastrophe for the both the British and the world economy; a prospect that is completely avoidable.

The article was published with Millennium Post, Business Standard and Outlook India on November 20, 2018.