As dust settles on Trump’s India trip, here’s a relook at the road ahead on trade 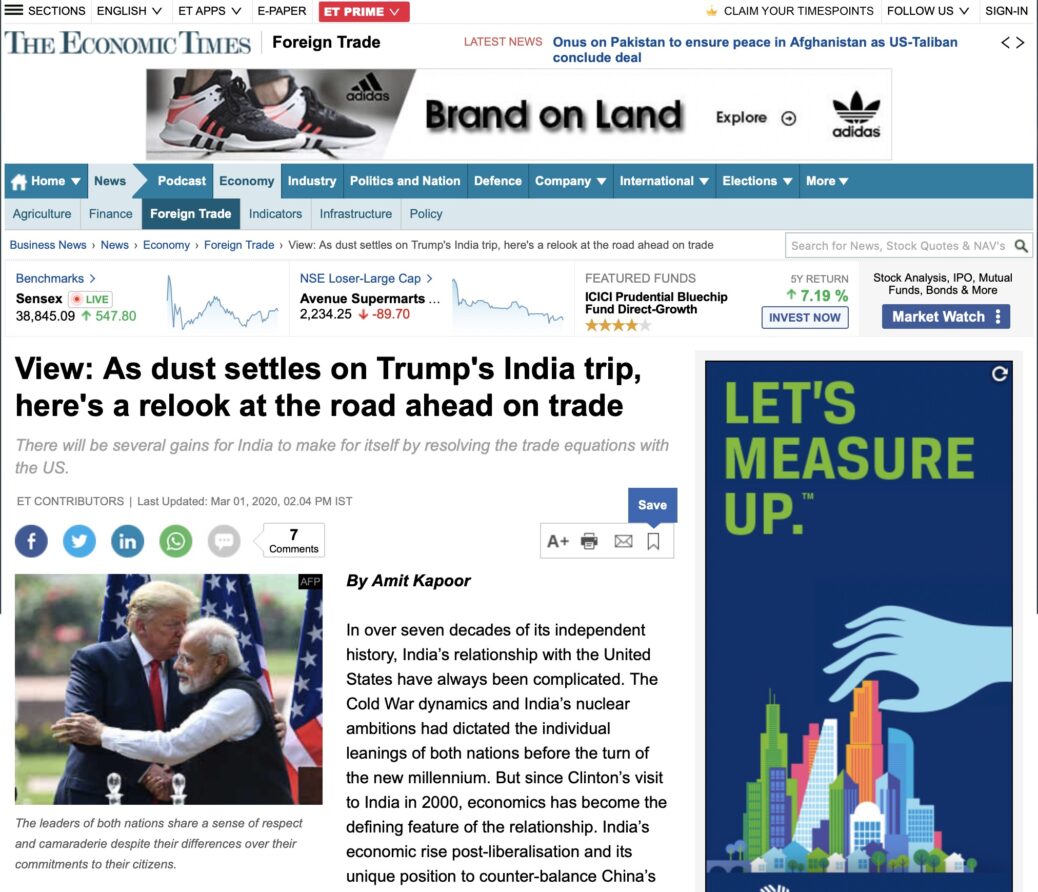 There will be several gains for India to make for itself by resolving the trade equations with the US.

In over seven decades of its independent history, India’s relationship with the United States have always been complicated. The Cold War dynamics and India’s nuclear ambitions had dictated the individual leanings of both nations before the turn of the new millennium. But since Clinton’s visit to India in 2000, economics has become the defining feature of the relationship. India’s economic rise post-liberalisation and its unique position to counter-balance China’s dominance in Asia places it in a favourable light from the US perspective. However, the complicated nature of the equation has not yet resolved itself.

India has retaliated over the last few years by raising import duties on several American products as well. The ensuing animosity has prevented the two trading partners from achieving a middle ground even after two years of constant negotiations. Due to a lack of progress on this front, it was promising to see Trump expressing optimism of achieving a trade deal by the end of the year. A higher degree of cooperation on trade will be beneficial for both nations.

From the American perspective having India as a trade partner provides it with a huge market that has immense potential to grow in the coming decades. It also provides the US with a strategic footing in Asia that has become especially necessary for it in the context of the growing Chinese aspirations to establish its hegemony in the region. And finally, at a time when democratic institutions are eroding, it would help the American cause to strengthen it by aligning its interests with the world’s largest democracy.

On the other hand, India has several gains to make for itself by resolving the trade equations with the US. First, it will help the country improve the current economic landscape that is marred by low growth and falling investment levels. A trade deal with the US will send out a positive signal to foreign investors who have become wary of the Indian markets over the last few years as evidenced in foreign investment as a percentage of GDP falling to a decade low of 1.1 per cent in 2018-19.

Second, as American firms are moving out of China and looking for options to manufacture in other developing countries, the Indian economy has a unique opportunity to benefit from the shift that might not come in the near future again. In case India establishes robust trade relationships with the US, it might act as a timely catalyst in attracting such firms towards India.

Finally, as India is choosing to stay away from multilateral efforts in Asia like China’s Belt Road Initiative and the Regional Comprehensive Economic Partnership (RCEP), exclusive trade deals with developed economies might give it a much-needed shot in the arm. Thus, a possible trade deal will be a win-win for both nations.

There is no denying that a sound trading relationship is crucial for both nations. While India was the ninth-largest trading partner in goods for the US in 2018, the latter became India’s largest-trading partner after edging ahead of China. Over the coming months, the key will be to iron out the specific issues that exist over various areas of trade. In healthcare, for instance, India needs to become more flexible on its stance on price caps. Only the truly essential products and devices should  be capped as the status quo might result in the country losing out on gains that can be made from future research and innovation that would arise out of collaboration. The import duties on items like Harley-Davidson motorcycles can be slashed without much losses. India needs to weigh its current stance against the benefits that can accrue over the long run through a stronger Indo-US partnership.

Both New Delhi and Washington recognise the growing convergence in mutual interests in cooperation from an economic and geo-political perspective. Fortunately, the leaders of both nations share a sense of respect and camaraderie despite their differences over their commitments to their citizens. It is time that the nations leveraged this relationship to extend the same approach towards trade.

The article was published with Economic Times on March 1, 2020