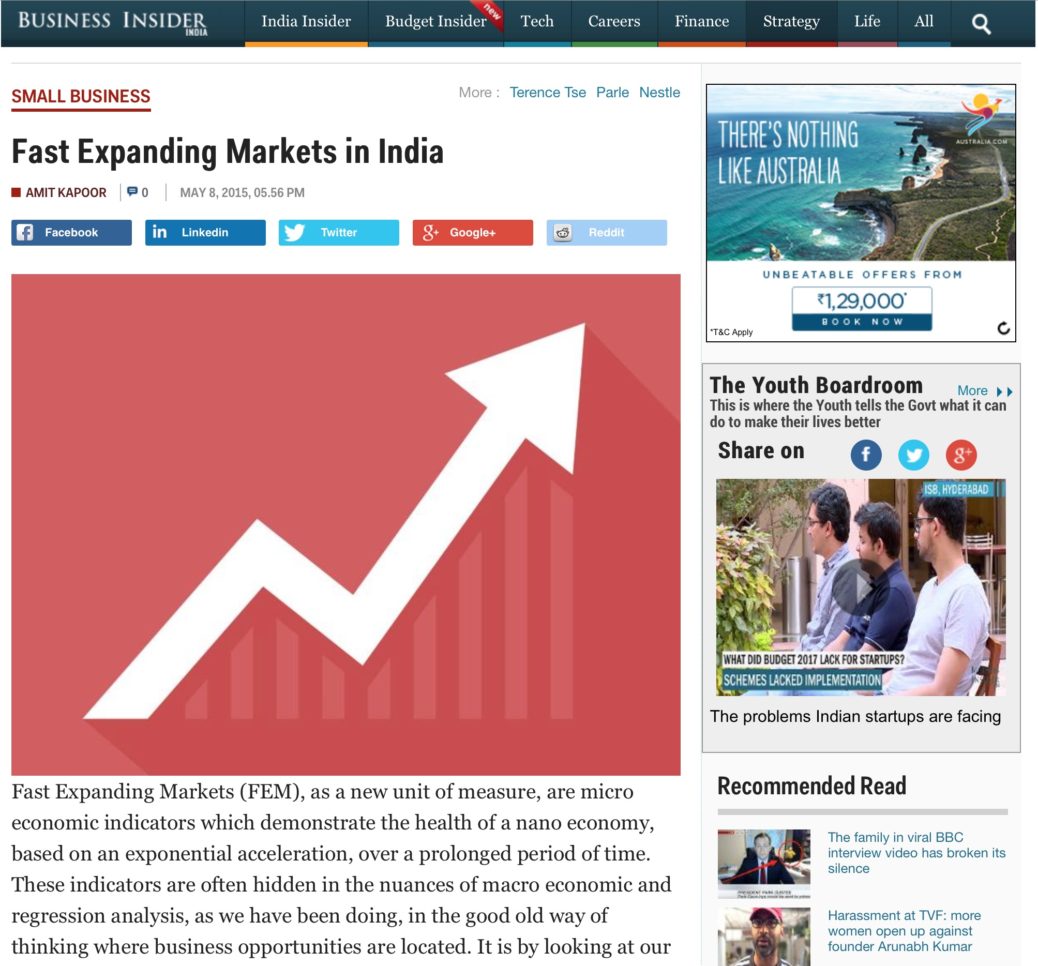 Fast Expanding Markets (FEM), as a new unit of measure, are micro economic indicators which demonstrate the health of a nano economy, based on an exponential acceleration, over a prolonged period of time. These indicators are often hidden in the nuances of macro economic and regression analysis, as we have been doing, in the good old way of thinking where business opportunities are located. It is by looking at our current society in India, that we remind ourselves that Indians traditionally and culturally are known to have a sweet tooth. In the festival of Diwali, probably the biggest festival in the Indian calendar, a long-standing tradition is one of exchanging mithai, the Hindi word for sweets.

Globalization may mean macro changes and yet the micro changes may have macro effects. In more recent times, the traditional mithai shops have taken a hit; Indians seem to be showing a departure in taste palates in favour of the more modern, neatly packed chocolate boxes. These sugary delights especially packaged for Diwali are available anywhere, in the price range of USD 1.5 to USD 100 and more, form the affordable to for the affluent.

While GDP rates in India have taken a hit in the last three years, and the current budget demonstrates even more concern on the ability to stick to a growing curve, or at least maintaining curve. But while the GDP dilemma is keeping policy makers awake at night, there is one industry, relatively new in its current scale, which is booming, and the growth story is far from complete.

Outline India, a research start-up focusing on field data collection within the socio-economic domain, took on this study under their guidance to explore if this was indeed the case, and the result can be summarized in the below infographics. India’s current chocolate consumption pattern suggests very low per capita levels of around 1.2 owing to few traditional players and high import tariffs on import of chocolates. This however, leaves ample scope in terms of change in domestic production and consumption rates. To bolster this argument, India’s hot and humid climate is conducive to cocoa production, key to the chocolate industry. As of 2011, India is also the largest milk producer in the world. With the middle class growing, average incomes rising and information asymmetry levels going down, consumers are more aware than ever before, about available choices to them. With more cultural exposure and an urge to appear more western in terms of behaviour and at par with the international consumer, levels of chocolate consumptions are rising, especially among urban Indians. Also cited are health reasons that favour chocolates over the more the more traditional Indian sweets. A majority of these savouries, house a higher number of calories and shorter shelf lives. No longer is chocolate considered a ‘luxury item’ or one meant only for ‘special occasions’.

In terms of what may prove to be a dampener? On the supply side, there have been numerous hurdles; the most important being bad connectivity and infrastructure. As a solution, a majority of the chocolate factories sprung up on the outskirts of big city centres, which were also best entry points for producers. A keen effort is being made to improve supply side channels to ease distribution. For instance, breaking away from the traditional supermarkets and discount stores, the big names such as Ferrero Rocher and Mars are trying to integrate into the lives of the upper middle class Indians by becoming available at the more accessible andapproachable grocery stores. Local producers like Parle and ITC with expansive distribution network are targeting the lower middle class as well, with a wider range of offerings via their pre-existing mom and pop stores or Kirana shops distribution networks.

While the chocolate industry grows at 15% annually, projections put the expected market size at USD 2.8 billion by 2015 and USD 3.2 billion by 2018.
Current market penetration rates are as low as 6 to 7 % at household level and about 22% in cities. This leaves scope for much change.

One of the best known ad campaigns in the industry by Cadbury read, “Khane ke baad kuch mitha ho jaaye” which translates to Grab something sweet after a meal, only this time, the company was pitching a chocolate, breaking into and away from the traditional Indian household mindset which correlates sweet with mithai. The big guns are going the extra mile to suit the Indian consumer; Nestle for instance launched a sweeter version of dark chocolate in India. Kraft is looking to invest USD 400 million for cocoa production in India in this decade. GDP may not be the brightest piece of headlines in these days, but while the macro arena gets engaged on issues of aggregate nature, there are small, powerful and fast moving markets, which are creating an entirely new “indian” concept of growth.

Published with Business Insider on May 7, 2015.