Water crises at our doorstep 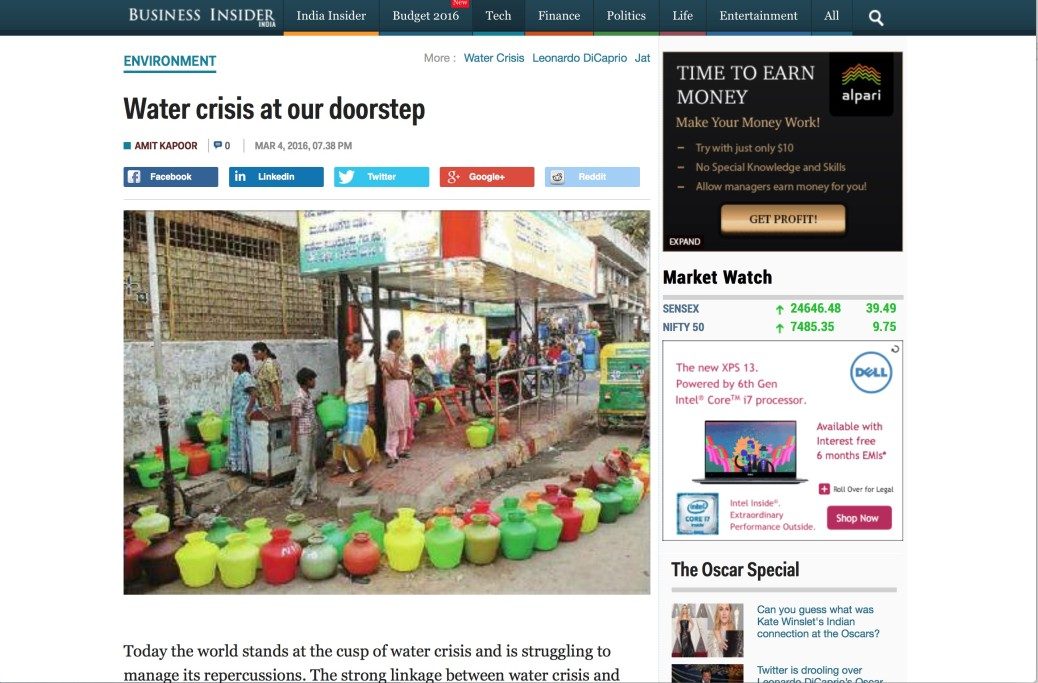 Today the world stands at the cusp of water crisis and is struggling to manage its repercussions. The strong linkage between water crisis and climate change has made the situation even worse and endangers the future of our planet. It was even reflected in the acceptance speech of Leonardo Dicaprio at the Oscars. He stated, “The climate change was the most urgent threat facing our entire species.” His powerful message indicates the need to act collectively and take actions for climate adaptation. The ill effects of the climate change in the form of increasing urban heat waves, declining groundwater level, shrinking reservoirs and rising sea levels have had a negative impact on the living conditions of the people. It has even changed the fresh water availability patterns across the global landscape and has created an imbalance of resources in the ecosystem.

The recent Global Risks Report 2016 released by World Economic Forum has declared ‘water crisis’ to be one of the biggest risks in terms of impact for the next ten years. It emphasizes that climate change will drastically exacerbate water crisis and will ultimately lead to conflicts and forced migration. The rising demand of water for the expanding population base of the world is already acting as a challenge, and if not served timely then by 2050, nearly 4 billion people would be living in water scarce areas. The gap between water available to the water consumed and supplied to the households is increasing by every passing day.

India is an ideal case study for understanding the current dynamics of water trends and how it is making life vulnerable for the common people. The country is a home to 18% of the world’s population and has merely 4% of the world’s freshwater resources. This creates a huge pressure on groundwater in terms of an increase in the per capita consumption of water and its extensive usage across different sectors. As a result, it is becoming difficult to bridge the water gap and create a sustainable linkage between its supply and demand.

A glance at the water availability in the metropolitan cities of India in numbers narrates the real story. Statistics listed by the Government of India Census 2011 indicates that only 48% households in the urban pockets of Gurgaon and 74% in Delhi receive drinking water from treated sources. 13% of households in the urban areas of Faridabad are dependent on the hand pump for drinking water. The water table depth in the National Capital Territory (NCT) stands at 280 ft due to the excessive extraction of underground water for various activities. The above data suggests that we need to take immediate steps to conserve our water resources and use water in a judicious way. Further, the improper use of water sources, industrial pollution, and overuse of groundwater accentuates the water challenges.

The recent Jat agitation in the state of Haryana greatly hampered the economy of the state by creating a water crisis. The nearby regions of Delhi, Faridabad and Gurgaon were devoid of water for nearly two weeks, and the crisis still persist. People were forced to purchase water from private water tankers where these private distributors were exploiting the needs of the people by asking for exorbitant amounts. The State Government has accounted an overall economic loss of Rs 34,000 crores including the damage caused to the Munak canal, which supplies water to NCT.

The entire episode draws our attention towards the fact that we need to look for options that can make our cities self-reliant, strong and livable. Our cities like Gurgaon are an example of an urban disaster and need feasible solutions. There is a need to wisely utilize the existing resources and find ways to conserve them. Action should be taken to treat the wastewater, recharge the natural water resources and enforce strong policies. The Central and State Government are making continuous efforts to create and implement innovative strategies. They are promoting water conservation by providing subsidy on the installation of Rainwater Harvesting because the technique reduces urban flooding and recharges water into the aquifers. They are also installing bulk meters to monitor and manage the water supply system as is done by Bangalore Water Supply and Sewerage Board (BWSSB). They are now able to track water related information from their bulk meters and act timely.

As reported by the Government of India in 2013, nearly 222 rivers in the country are excessively polluted because of industrial pollutants. The water is unfit for drinking purposes as it contains toxic chemicals, arsenic, and metallic components. The government should take strict action against them by imposing heavy penalties. The immediate need is thus to clean our rivers by starting a ‘Clean India Drive dedicated to our water bodies’ so as to make them pollution free. It is time to understand that we need to take the next step by moving to the implementation from the planning stage. Economic miracle that Indian is hoping will not be possible until we devise right strategies to enhance the livable conditions (Social Progress) of the country.

Published with Business Insider on March 4, 2016.