The twin challenges of poverty and hunger 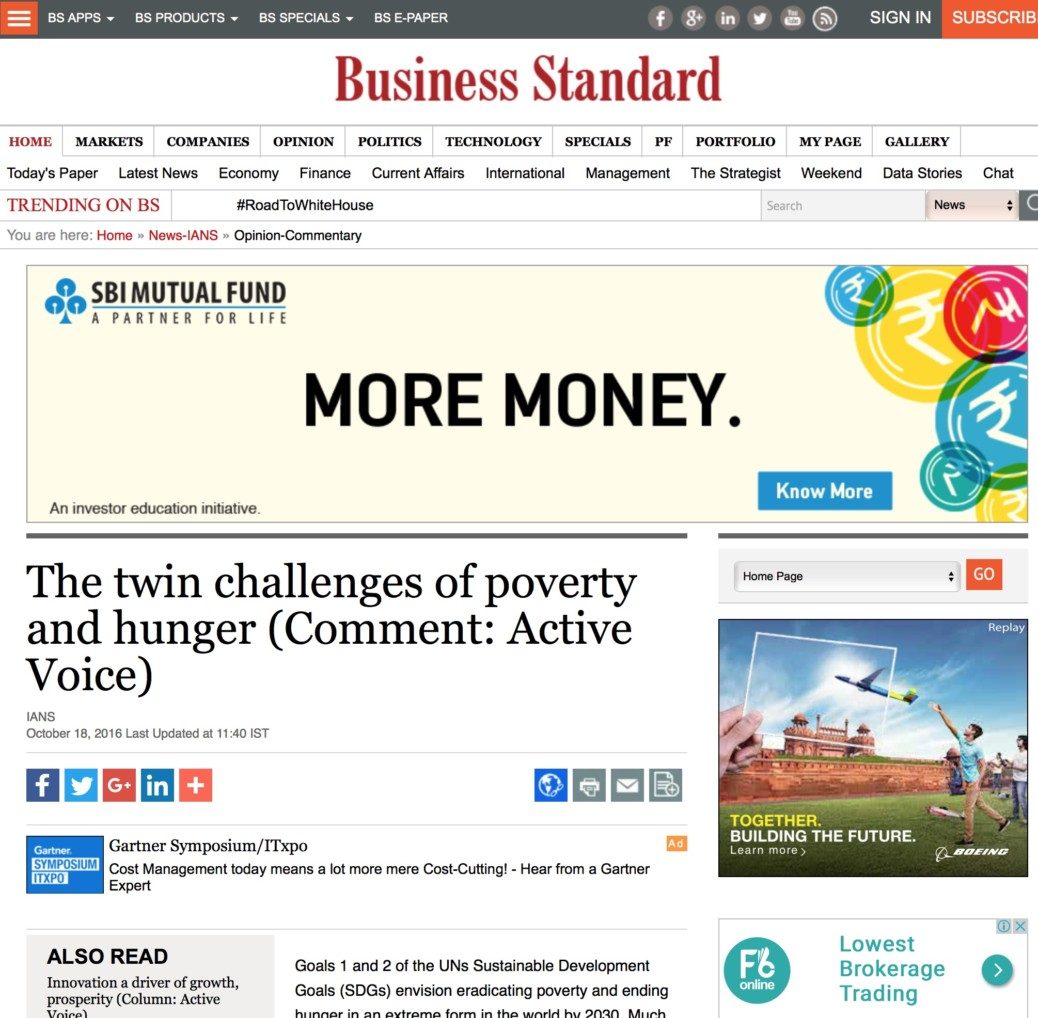 Goals 1 and 2 of the UNs Sustainable Development Goals (SDGs) envision eradicating poverty and ending hunger in an extreme form in the world by 2030. Much will depend on how developing countries fare on the twin goals over the coming decade-and-a-half. This is because a bulk of the poor and hungry population is concentrated in the developing regions of the world.

Poverty and hunger are important challenges on which the debate often has the potential to become lopsided. This is because, at times, ideological beliefs hold sway even in the face of evidence. The global estimates for poverty and hunger show that close to 767 million people (10.7 per cent of the world population) are poor while those who do not have enough to eat number close to 800 million.

Two recent reports shed some light on important data and performance of countries on these twin challenges. These include the Global Hunger Index (GHI) of the International Food Policy Research Institute (IFPRI) and the Pathways to Reducing Poverty and Sharing Prosperity in India (PRPSPI) of the World Bank Group. The first concerns hunger and is global in geographical coverage while the second looks at poverty at a subnational level and is national and subnational in geographical coverage.

The Global Hunger Index has been annually tracking hunger levels at the national, regional and international levels since 2006. For this, IFPRI has developed a hunger index (a composite measure) with four component indicators. The oldest calculations go back to 1992 on the Index. These four indicators include percentage of undernourished in the population, percentage of wasting in children under five, percentage of stunting in children under five, and under-five mortality rates. The scores are then standardised depending on the component indicators and post this, aggregation is done.

Methodologically, this is a similar procedure for other development indices like the HDI. The scale of the index is from 0-100 with 100 representing absolute hunger and 0 representing zero hunger. The categorisation of scores is done on a five point range scale from <9.9, 10.0-19.9, 20-34.9, 35-49.9, <50 being countries and regions with low, moderate, serious, alarming and extremely alarming levels of hunger.

During the commensurate timeframe, 22 countries reduced their scores by 50 percent or more. Prominent among these are China, Brazil, Turkey, Saudi Arabia and Iran. On the 2016 Index, Africa south of the Sahara and South Asia are regions that have the highest GHI scores at 30.1 and 29.0. Thus they are placed in the alarming level.

India is at present placed at 97th among 118 countries considered for the Index, improving its score from 46.4 in 1992 to 28.5 at present, which is a considerable increase, but overall, it’s still is at a serious level.

Poverty is the broader construct than hunger and is critical for an understanding the problem of deprivation in human society. The PRPSPI broadly looks at India’s experience on poverty alleviation in the past two decades. The report notes that poverty has declined by little more than a half on India’s official poverty line between 1994 and 2012 from 45 percent to 22 per cent, lifting an astonishing 133 million people out of poverty. Despite this, India’s growth has not been particularly inclusive, with roughly the inclusive growth performance of 2/3rd of the countries being better than India for the 2005-12 period.

The geographic spread of poverty also showcases a revealing insight. Almost one in five Indians is poor and out of every five poor people, four live in the rural areas. The top states for poverty in absolute terms are Uttar Pradesh (60 million), Bihar (36 million) and Madhya Pradesh (24 million). The top seven states account for roughly 62 per cent of India’s poor. Also, the poverty rate is just seven per cent in big cities with a one million-plus population.

The problem with poverty is its related dimensions of deprivation in choices and well-being. The poor also own lesser assets and spend more on food, fuel and light. This reduces the percentage spend they have for education and health and makes them prone to a vicious cycle. The poor also thus have lower access to basic services.

Another important insight is that for poverty to be reduced states will have to grow faster. The states which have lagged behind on growth rates are also the ones where there are low GSDP per capita and, in turn, higher levels of poverty.

Over the next few years, policymakers and citizens should strive to eliminate poverty and hunger from Indian society to fulfill the SDGs. This can be done by focusing on growth but at the same time ensuring that growth gets translated into jobs and opportunities and becomes more inclusive. The need is also to rise above barriers of caste and social group identities, which prevent people from realising their economic freedom.

Published with Business Standard on October 18, 2016.