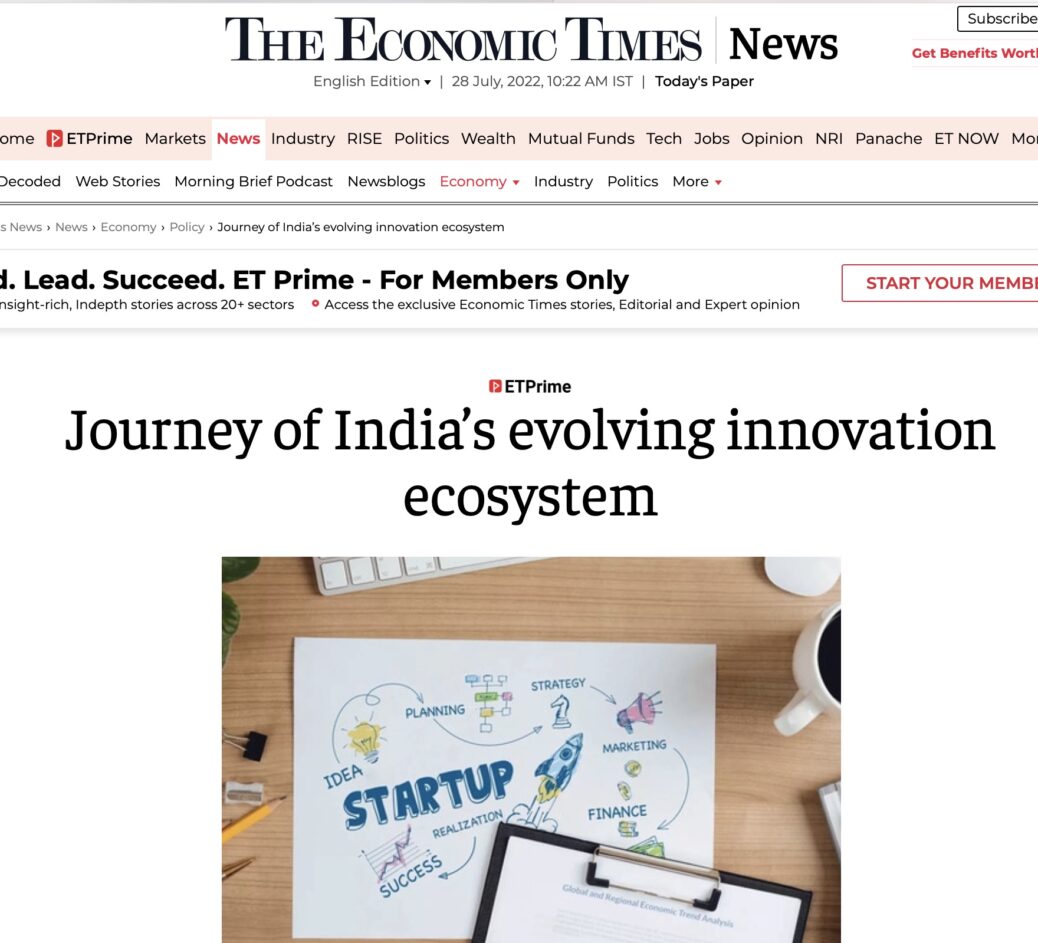 Over the last decade,  the pace of disruptive technology has pushed government , businesses, industries, entrepreneurs and consumers to innovate and tap into the full potential of their resources. As the core of the economy now lies in the opportunity to move toward advanced digital production technologies , that will require bringing efficient changes in the manufacturing sector and help industrial development rather than relying on basic factors of production. In this backdrop , India has needs to invest in innovation as it is the key to driving sustainable and inclusive growth and its benefits will reflect in long run. For India to emerge as a leader in the era of the Fourth Industrial revolution. It needs to grab every  chance to boost its manufacturing sector , improve its innovative capacity to further accelerate its economic growth and reduce inequalities within the society.

As country enjoys regional diversity and great demographic dividend it’s approach towards innovation has to be more  “ humane and inclusive ” than other advanced economies.  Its recent efforts in improving its overall innovation ecosystem can be seen from its overall rank improvement on the Global Innovation Index (GIII) over the last seven years. In the list of 132 countries, India ranked 76th in 2014 and now stands at 46th in 2021, reflecting continuous efforts by Government of India. If the pace of innovation continues to improve then India has the potential to achieve its ambitious target to emerge in the top 25 countries of Global Innovation Index.

The Evolution of Indian Innovation ecosystem can be attributed to its focus on nurturing start-up culture , which has emerged as a driving engine for growth of economy. It has the world’s third largest ecosystem ; today 1 out of every 10 unicorns are born in India.  The Start-up India initiative launched in 2016 by Government of India can be attributed to it’s success in strengthening the start-up ecosystem.  The number of recognized start-ups have increased from 726 in FY 2016-17 to 65861 in FY 2021-22. The wave of Unicorns soared to new hights as it has achieved the milestone of 100 unicorns in May 2022.

EdTech and FinTech unicorns in India are transforming how we perceive the existing ecosystem,  creating knowledge diffusion and spill over in the economy and further enabling large-scale employment opportunities.  This is because the pace of digitalization has accelerated in India with affordable access to internet hence determining their success which has overall improved ease of living of people. Recently honourable Prime minister Narendra Modi while inaugurating Digital India Week 2022 in July launched multiple set of digital initiatives aimed at enhancing the accessibility of technology and streamlining service delivery to ensure a boost to start-ups. He also announced the 30 Institutions to be supported under the Chips to Start-up (C2S) Programme. The C2S Programme aims to train a specialized workforce in the design of semiconductor chips at bachelor, Masters and Research levels, which act as a catalyst for the growth of start-ups involved in semiconductor design in the country.

To further tap into the country’s technological potential, the first group to be identified and supported should be the grassroots innovators. The grassroots innovators are the people who have put to use traditional knowledge and developed indigenous technology. Grassroot innovators and community-based innovators identify new ideas and possible solutions to local problems in the region. Based on these practices, entrepreneurs can work at a regional and national level and provide various solutions that must be shared globally. Lack of visibility keeps most of these innovators’ solutions localized, unable to make a more significant impact. This is crucial as the diversity of innovation is essential; therefore, it’s vital to bridge the gap between grassroots innovators. In January 2022, MOU was signed between NIF and Amazon India for online distribution of products by grassroots innovators, outstanding traditional knowledge-based holders, and student creativity-based innovations will be made available to millions of customers. Supporting such innovators creates knowledge spill overs and provides a competitive edge in the economy.

The second group should the existing workforce. Currently India faces challenge of integrating its large share of the low-skilled labour force to cater to the domestic and international demand from formal and informal sectors into the digitized and automated world. Other challenge is to improve quality of human capital. It is observed that there is a mismatch between what is taught at the university level and what is required when they enter labour market workforce.  Workforce is not equipped with the latest knowledge and skills to meet Labour market demands. The less opportunities then force people to move to another countries for better opportunities. This is negatively impacting country’s ability to innovate. The government of India is currently addressing this via its upskilling programmes.

Lastly,  the role of Intellectual property rights (IPR) is crucial in evolving innovation ecosystem. This is because intangible assets like patents , trademarks and copyrights create spill overs in the regions , therefore it is important for start-ups to commercialise these assets for creation of new outputs.  In the span of 7 years, patents filing and grant of patents have seen growth of about 50% . However, there is still need to reduce the pendency of  patent filing and also at the same time increase commercialization by the domestic patents filed.

The article was published with Economic Times on July 27, 2022.