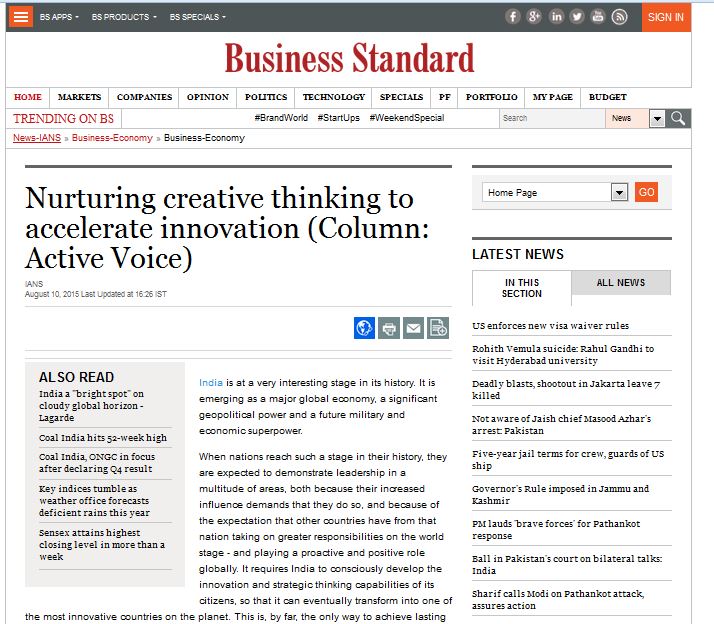 India is at a very interesting stage in its history. It is emerging as a major global economy, a significant geopolitical power and a future military and economic superpower.

When nations reach such a stage in their history, they are expected to demonstrate leadership in a multitude of areas, both because their increased influence demands that they do so, and because of the expectation that other countries have from that nation taking on greater responsibilities on the world stage – and playing a proactive and positive role globally. It requires India to consciously develop the innovation and strategic thinking capabilities of its citizens, so that it can eventually transform into one of the most innovative countries on the planet. This is, by far, the only way to achieve lasting success, and to build sustainably on past successes, in today’s dynamic, uncertain and rapidly changing world.

The US is an example of a country that has harnessed the creative energies of its people and reached an advanced stage of development. Similarly, China is making a sustained bid to become an innovative economic superpower. Hence, if India aspires to great power status, then it really has no option but to be as innovative and strategic as possible in its thinking and actions. Four broad areas are crucial for understanding innovation as a paradigm.

The underlying basis for any form of innovation is in fostering creative thinking, building trust and authenticity, all leadership traits. Beyond this, envisioning and imbibing a purpose larger than oneself is the secret ingredient of true innovation. A strong purpose creates true value, and fuels the necessary motivation to keep on moving forward in the face of seemingly insurmountable odds. Other qualities that foster creative thinking and innovation include the ability to listen actively, to question strategically, and to reflect deeply. Conceptual clarity in thinking and experimenting without fear of failure are critical elements for fostering creative thinking. Mentoring and coaching are equally important in embedding a culture of innovation within an organization. Innovation thus is both about the mindset and the ability to harnesses the collaborative genius of employees to intelligently address customer needs and wants.

A fascinating question is: Can governments innovate? And how? In any country, the government often runs/controls key aspects of people’s lives, through various ministries and mechanisms. India has close to 80 union ministries and a large public sector (with approximately 230 enterprises that offer an enormous potential for public sector innovation). Apart from public sector enterprises, the government should focus on encouraging sharing of innovative ideas, empowering the workforce to achieve innovation, simplifying outdated rules and processes and working towards reducing complexity and bureaucracy. Technology can also act as an enabler in most processes; properly structured public-private partnerships as well as greater competition amongst existing players can play a key role in generating newer innovations. AADHAR, the world’s largest biometric ID system created by the government’s Unique Identification Authority, is an excellent example of what governments can achieve when they set their minds to it. The transformational impact of AADHAR is even more remarkable when we consider that it could help people get an identity and form the basis of targeted subsidy.

Corporates need to follow a multi-pronged strategy with respect to engaging with startups, so that they can have a steady source of fresh ideas and access to unconventional thinking. It helps them mitigate the danger of becoming obsolete/ irrelevant in a fairly complex and globalized economy. Some of the strategies that corporates could employ for being relevant can be collaboration with universities/ research labs, creating technology accelerators, acquiring startups and being part of startup networks/ompetitions. In fact, the global delivery model of the software industry was pioneered in India by a few software companies in the late 1980s/early 1990s that ended up disrupting the global software industry and being considered as a global benchmark.

Innovation abroad and the quest for a Silicon Valley?

While there are plenty of lessons that can be learnt from countries like the US and Israel, as also the EU, and from even within India, one must appreciate that each innovation cluster in a particular country is the product of some unique attributes that are not replicable. Therefore, it is best that each plays to their strengths and adapts ideas from others based on local constraints. Another question that comes to the fore often is can India aspire to build the next generation Silicon Valley? Also is that aspiration valid in the first place? When India can send a missions to the Moon and to Mars under its resource constraints, it surely has the capability to build the next generation Silicon Valley.

Startups need the right kind of mentors and of course capital. But they also need people who are passionate about startups and technology. A place where there is top-of-mind recall and support for startups will be very welcoming to entrepreneurs. Delayed gratification is another important aspect of how success eventually happens. There are no get-rich-quick schemes here, and taking a long term view of wealth creation is what eventually helps entrepreneurs create a company that lasts for the long term, and adds positive value to the country and society in which it thrives.

Published with Business Standard on August 10, 2015.