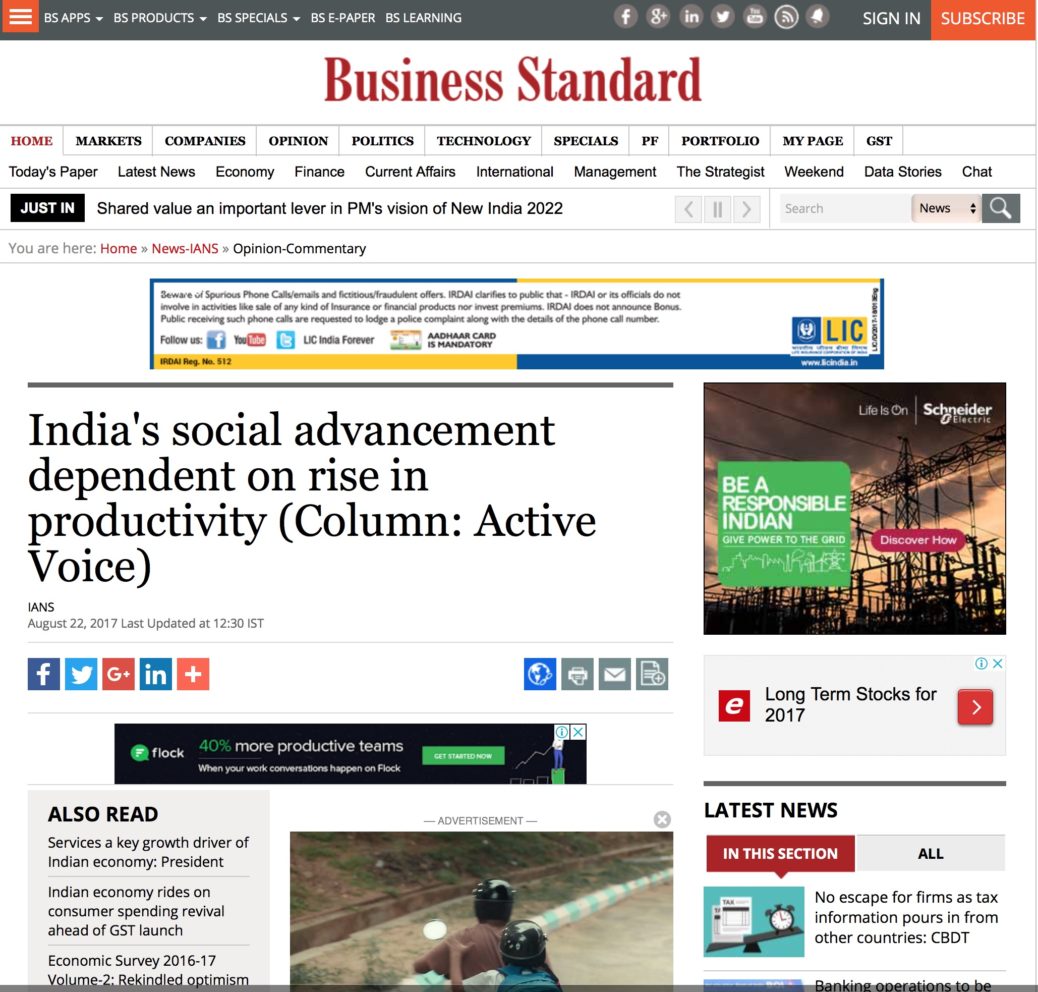 The Indian rupee has been on a rising spree this year. Beginning from historical lows back in December-January, when the rupee had almost touched 69 a dollar, it has risen to a two-year high of 63.5 to a dollar in the last few weeks. Simultaneously, there has also been a growing clamour of voices that are vehemently calling for a moderation of the overvalued rupee. The common argument is that an overvalued rupee implies that it is at a higher price than what would be deemed a more appropriate exchange rate. This makes the country’s exports costlier in the foreign market and imports cheaper in the home market. In other words, currency appreciation makes exports less competitive in the world markets and enhances the competitiveness of imports.

The “cost argument” for improving competitiveness is actually a very narrow way of looking at the issue. First, the end goal of every nation is to raise the standard of living of its citizens. Keeping that in mind, devaluation seems counter-intuitive. If a nation devalues its currency, foreign goods become costlier and its own goods are sold at a discounted price in the world market. Prosperity simply cannot be achieved in such a scenario. Moreover, nations like Germany and Switzerland have experienced rising levels of prosperity despite having appreciated currencies. Their ability to compete despite being paid higher prices for exports and labour seems to be a more desirable national target.

Third, there are more long-term implications with deliberate devaluation of the rupee for the upgradation of the economy. The expectation of a low exchange rate leads to price competition among firms and investment in price sensitive segments and industries. This deviates investment away from innovations that can enhance productivity resulting in slower progress towards higher order competitive advantages. In such a case, devaluation may lead to pressures for further devaluation and kickstart a vicious cycle that could take a nation further from the idea of competitiveness.

Therefore, currency devaluation or revaluation might just be far more dangerous and less useful than is usually portrayed. On the other hand, instead of currency manipulation, the Indian economy has more concerning issues affecting its competitiveness that need immediate attention. Competitiveness is driven by productivity and productivity numbers in India are problematic both in absolute and in relative terms.

Multiple studies have noted that productivity in Indian manufacturing has fallen since the reforms of 1991. A recent one by Trivedi et al (2011) reports that the total factor productivity (TFP) growth for manufacturing activities has fallen from 1.88 percent between 1980-1991 to 1.05 percent between 1992-2007. A downward trend is also reported for the unorganised manufacturing sector by most of the productivity studies. Similarly, in agriculture, India’s productivity has been lacklustre at best. In a recent visit to Iceland, I was made aware of the fact that the country manages to produce 4000 tonnes of tomatoes in a hectare of land. Indian farmers, on the other hand, only manage to get 18 tonnes of tomatoes out of the same amount of land. How can India compete on the world market with such gross contrasts in productivity? Out of currency revaluation and productivity, clearly the latter is a goal worthier of relentless pursuit.

India has never targeted productivity as a tool for achieving higher prosperity when it is, in fact, the key to raise the standard of living of the nation’s workforce. If productivity levels remain unchanged, the economy would grow in the same proportion as the inputs are absorbed. In such a case, the economy would grow in size but welfare would not. This is because the utility gained from an incremental output is equally compensated by the disutility of the incremental efforts expended. In more economic jargon, the marginal utility of the additional output equals the amount of labour and capital devoted to it multiplied by the real wage rate and the real rental rate of capital. Clearly, there can be no social advancement without a rise in productivity. Therefore, India’s developmental policy and public discourse needs to be attuned to the same before a generation of unproductive labour finds itself to be a victim of misguided economics.

The article was published with Millennium Post and Business Standard on August 22, 2017