Here’s how RBI is shaping up our Independent India! 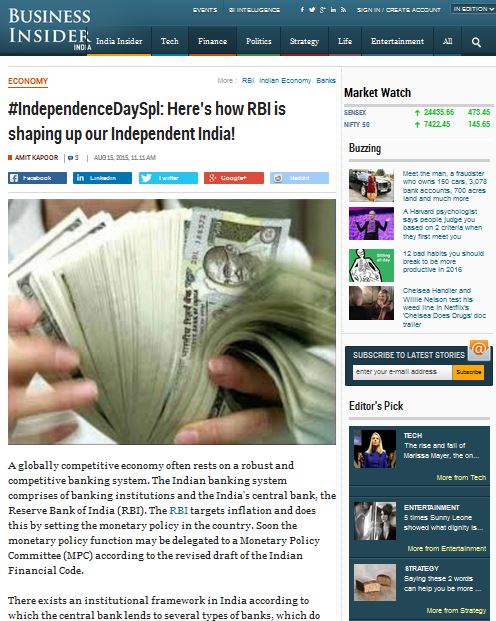 A globally competitive economy often rests on a robust and competitive banking system. The Indian banking system comprises of banking institutions and the India’s central bank, the Reserve Bank of India (RBI). The RBI targets inflation and does this by setting the monetary policy in the country. Soon the monetary policy function may be delegated to a Monetary Policy Committee (MPC) according to the revised draft of the Indian Financial Code.

There exists an institutional framework in India according to which the central bank lends to several types of banks, which do the lending to corporates and retail consumers through various lending initiatives. The competitiveness of any location is determined by a host of factors like the quantity of money supply in the economy. It is also determined by access to credit by various businesses as well as retail consumers. The Indian banking system is fairly robust and has introduced a fair bit of competition in the recent past.

Liberalisation started in India before 1991, but the balance of payments crises in 1991 saw structural reforms in the financial sector (Banking, Capital Markets and Development Financial Institutions). These were based on the recommendations of the ‘Narasimham Committee Report’ of November 1991. Within the banking system, control had resulted in several significant issues namely a small capital base, an overall fragile health, low profitability arising out of a low level of competition in the banking sector. Various measures like the establishment of debt tribunals, capital infusion into banking sector, clearly defined NPA’s, etc. resulted in a decline in NPA’s from roughly a quarter of gross advances to 16% by 1998. Other measures included opening the sector to private and foreign participation as well as greater freedom to open branches and ATM’s.

Post-1998 saw another sector of reforms. They included the enactment of the Securitisation and Reconstruction of Financial Assets and Enforcement of Security Interest (SARFAESI) Act, 2002 that enabled the sale of financial assets to Securitisation/ Reconstruction companies. Also, a Credit Information Bureau (India) Ltd. (CIBIL) was established in 2000. Great competition with the entry of a large amount of foreign and private sector banks marked this phase. FDI limits were also increased to 74% from the earlier 49% during this phase. The Gross NPA’s as a % of total advances were brought down to 2.4 % in 2008 from the level of 12% in 2001.

The past few years post the 2008 recession have seen greater branch penetration and financial deepening, but a worrying sign for the banking sector seems to be the rising NPA’s. While NPA for the private and foreign banks seem to sub 5%, those of the public sector banks seem to be at greater than 10%. What this means is public sector banks should brace up for greater competition, effective operations and next set of reforms within the sector.

Published in Business Insider on August 10, 2015 as a part of Independence Day Special Series.