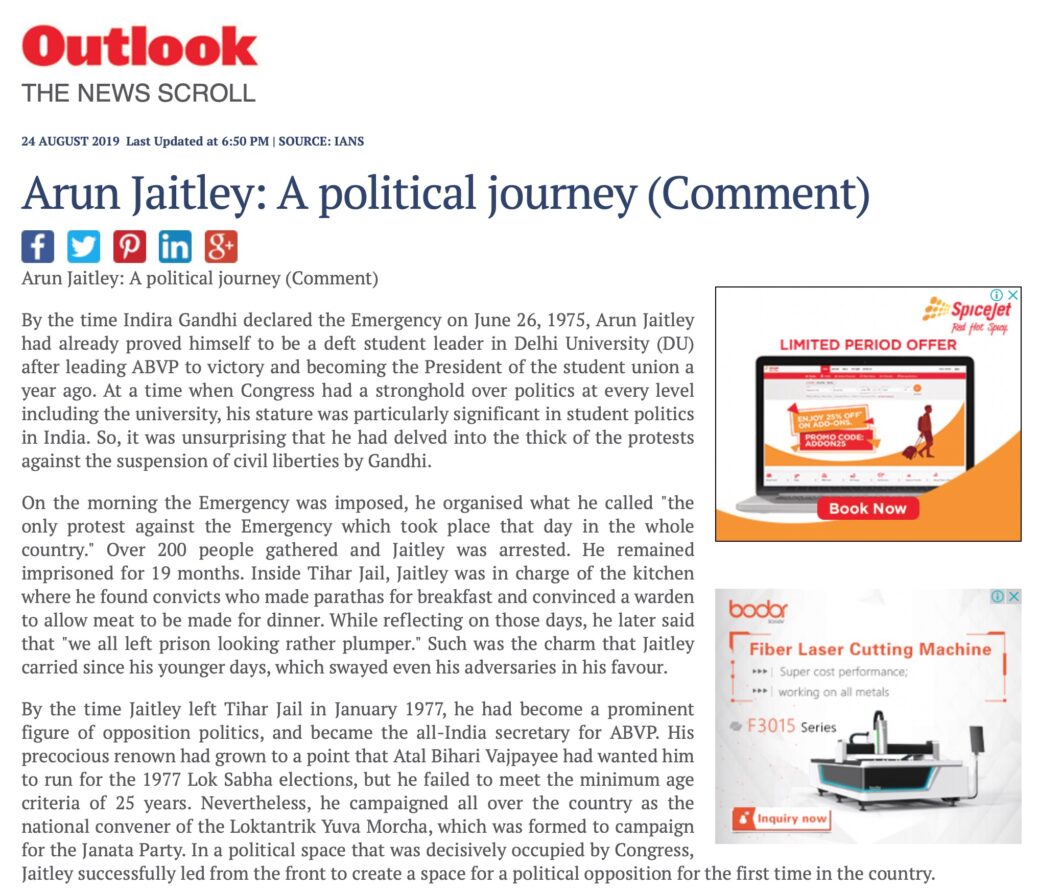 By the time Indira Gandhi declared the Emergency on June 26, 1975, Arun Jaitley had already proved himself to be a deft student leader in Delhi University (DU) after leading ABVP to victory and becoming the President of the student union a year ago. At a time when Congress had a stronghold over politics at every level including the university, his stature was particularly significant in student politics in India. So, it was unsurprising that he had delved into the thick of the protests against the suspension of civil liberties by Gandhi.

On the morning the Emergency was imposed, he organised what he called “the only protest against the Emergency which took place that day in the whole country.” Over 200 people gathered and Jaitley was arrested. He remained imprisoned for 19 months. Inside Tihar Jail, Jaitley was in charge of the kitchen where he found convicts who made parathas for breakfast and convinced a warden to allow meat to be made for dinner. While reflecting on those days, he later said that “we all left prison looking rather plumper.” Such was the charm that Jaitley carried since his younger days, which swayed even his adversaries in his favour.

By the time Jaitley left Tihar Jail in January 1977, he had become a prominent figure of opposition politics, and became the all-India secretary for ABVP. His precocious renown had grown to a point that Atal Bihari Vajpayee had wanted him to run for the 1977 Lok Sabha elections, but he failed to meet the minimum age criteria of 25 years. Nevertheless, he campaigned all over the country as the national convener of the Loktantrik Yuva Morcha, which was formed to campaign for the Janata Party. In a political space that was decisively occupied by Congress, Jaitley successfully led from the front to create a space for a political opposition for the first time in the country.

Despite these successes that had cemented his place in Indian politics, he went on to pursue a fledging career in law for the next two decades while still remaining involved in politics in the periphery. The battles within the courtroom themselves kept him close to the political brass. A few prominent ones were when he fought the case for Indian Express against Indira Gandhi”s attacks on the paper for the negative coverage during the Emergency and when he aided Ram Jethmalani in the Bofors investigations against Rajiv Gandhi. He also successfully defended Advani in court through the 1990s against charges for the demolition of the Babri Masjid and money-laundering scam in what the party patriarch termed “one of the most challenging periods of my life.” The lawyer in him never lost his political streak.

When the BJP-led NDA came to power in 1999, the lawyer-politician held several ministerial positions – first of information and broadcasting, and then of law and justice. He soon became the public face of BJP defending the government through a wide range of issues on prime-time television. His suave, articulate self along with his legal experience proved to be an invaluable asset for the party. Since then, Jaitley had become well integrated in the Indian political landscape through his presence in the Rajya Sabha even during the UPA years when he was a commanding voice of the opposition.

A trait that set Jaitley apart from the political class in Lutyens” Delhi was his lack of inhibitions in cultivating friendships that often cut across party lines and did not have the usual quid pro quo nature to it. Despite the parliamentary vitriol, his associations with opposition leaders never wavered. Most significantly, he defended Congress leader Madhavrao Scindia in the Jain hawala case. Several other Congress leaders have gone out of the way to show personal affection towards him.

But a friendship that has stayed with him through the ages is that with Prime Minister Narendra Modi – going back to the time when the latter was a pracharak from Gujarat. In a way, the two have perfectly complemented each other: one popular among the masses, the other with a popular elite following; one an outsider to Delhi, the other a quintessential insider. Even prior to 2014, Jaitley had been a crucial asset in Modi”s arsenal during his three electoral victories in Gujarat as he managed the media, advertising and aided in legal issues. He had also been a vital ambassador for the party in seat-sharing negotiations across states and various NDA partners.

It was, thus, almost inevitable that Modi would rest his trust in Jaitley with the most challenging portfolio of finance after his 2014 victory. When the Modi government came into power, the economy was in a precarious state; so much so that it was grouped in the infamous “Fragile Five” owing to its widening fiscal deficit and soaring inflation. Being the effective manager that he was, Jaitley quickly steadied the ship as he quickly approved the monetary policy framework that had long been in the works. Through the term, he backed Modi on his radical policy reforms like the IBC and GST – most of which gained bipartisan acceptance due to Jaitley”s long-cultivated friendships and his legal experience to engage in dialogues and deliberations.

The journey of Arun Jaitley from Tihar Jail to North Block to South Block through the political corridors of Delhi and the legal chambers of its courts has, in fact, been the story of India”s political history since Nehru. Jaitley has left an imprint across the major turning points that the nation has experienced in its post-independent history. He was a strategist who defined the political realities of today by shaping a formidable alternative to the party of Nehru and Gandhi and did so while building an ever-expanding circle of friends and oodles of goodwill. It is no wonder why he was so indispensable to the Prime Minister and to the party.

The article was published with Outlook India and Daily Hunt on August 24, 2019