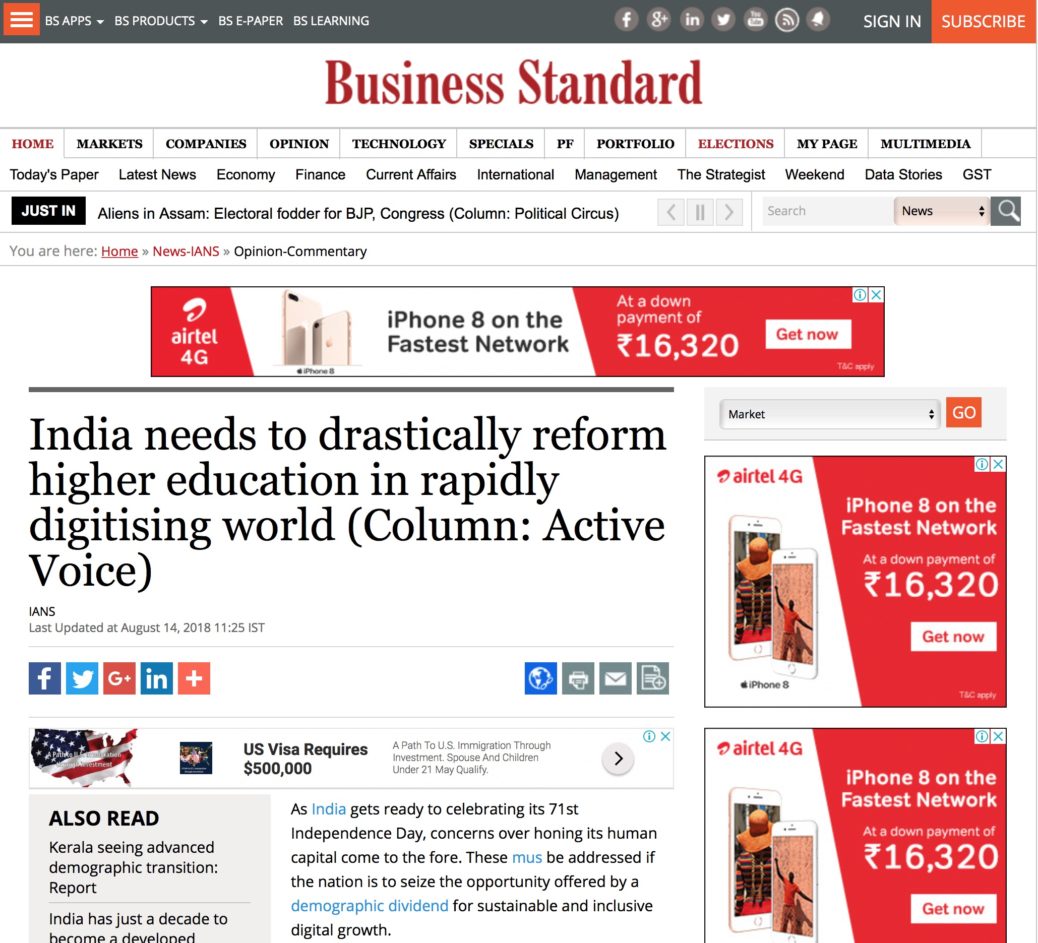 As India gets close to celebrating its 72nd Independence Day, the concerns of honing the human capital come to the fore, wherein the nation must cease the opportunity of a demographic dividend for a sustainable and inclusive digital growth. The growing working population, which is expected to increase by 1.3 million every month between now and 2025 (World Bank,2018) demands a focus on higher education and skilling to create a pool of human capital in the ongoing digital revolution and take India on a higher growth trajectory. While India already lags behind its peers in terms of employment generation owing to various socio-economic reasons, growing digitalization can further accentuate the frictions in the job market if the country doesn’t align the skills of its rapidly growing workforce to the demands of the new digital economy. It is thus essential to adapt to the new technology in order to tap the full potential of digital disruption and reduce inequality in the society.

This could be achieved in part by transforming the higher education system in India in a way that it enables the students to prepare for challenges of the future jobs. Changing the higher education system in India to keep abreast with the technological developments, however, requires the understanding of the way the innovations are going to impact the labor market in the country. There seems to be a likely increase in the demand for the high skilled workers who use non-routine cognitive skills and ICT skills and the low skilled workers who use non-routine manual skills, while the mid-level skilled workers who are in their routine occupations are more likely to experience a decline in demand for their skills because of the automation of the repetitive tasks. A 2017 OECD study, “Future of Works and Skills”, points out that employment in high skilled occupations in India experienced a 6.3 percentage point increase over the period of 2002- 2014, while employment in medium skilled routine occupations observed a decline of 5.3 percentage points over the same period.

Sectoral analysis of the Indian economy reveals that manufacturing sector has a high potential for automation, with an estimate of 69 percent of the tasks that could be automated in the organized manufacturing in India (World Bank Group Foresight Report, 2016). The automobile sector is expected to buy 60 percent of all industrial robots sold in India (ET Auto, 2015), which could be used for doing large number of routine tasks such as welding, polishing and painting in the manufacturing plants, leading to a consequent decline in such routine jobs.

Further, looking at the services sector, e-commerce provides example of the India’s industry where technology enabled innovations, such as digital payments, hyper-local logistics, analytics driven customer engagements and digital advertisements are expected to support the growth of the sector. While, the sector is set for a growth from USD 38.5 billion in 2017 to USD 200 billion by 2026 (IBEF,2018), consequently, expecting to generate employment in e-commerce and the allied industries, such as logistics, transport and warehousing, there is a greater likelihood of displacement of small to medium retail enterprises and shop floor salespersons they have, because of the increasing demand for the automation skills in the industry.

Another major sector which has been undergoing a huge technology transformation is the Information Technology (IT) sector, and has seen tremendous growth over the last 20 years. The contribution of the IT sector to India’s GDP rose to approximately 9.5 percent in 2015 from 1.2 percent in 1998 (IBEF, 2017). However, the sector is expected to experience a 14 percent decline in its workforce by 2021 (HFS Research, 2016) on account of application of machine learning and cloud computing technologies which will automate the routine and backend tasks. The IT sector workers need to upskill themselves on the SMAC (Social, Mobility, Analytics and Cloud) technologies to overcome the labor market frictions arising out of the digital transformation. The SMAC market is expected to grow to USD 225 billion by 2020 (IBEF, 2017) and create employment opportunities in the related capabilities.

The impact of the automation technologies has also been felt in the financial sector, where there is already an extensive use of chatbots and internet banking at the customer services end. While, owing to the growing digitalization in the sector, there will be some job displacements for the digital transactions which are non-risky in nature, but there will always be a requirement for human intervention when it comes to risky transactions and investing money. In fact, digital finance is expected to create 21 million new jobs by 2025 (ILO, 2018).

A review of the future of work in India across various sectors on account of ongoing digital revolution, necessitates the need for transforming its system of higher learning to deliver a workforce which is industry ready. This could be achieved by learning from the success stories of countries such as Russia, Singapore and Switzerland, which have developed special industry specific programs to prepare their people for the future jobs, and also analyzed the in-demand future skills to provide appropriate skill-based training to the young people.

Further, encouraging more private sector participation in setting up higher education institutes tailoring to the needs of the industry can bridge the skill gap experienced by the Indian economy. However, the government needs to ease the regulatory requirements for setting up the universities to encourage greater private investments. In addition to this, emphasis should be given to the outcome-based indicators, such as the number of students who get employment after graduating from the university, instead of input-based measures, such as the gross enrollment ratio for a university. Moreover, online courses from platforms such as Coursera, edX, and Udacity, which have emerged as the online solution to the demand supply skill gap, should be awarded credits in the undergraduate/graduate studies, to encourage greater student participation.

At this juncture in the global economic scenario, India must make significant revisions to its higher education system to make their future workforce industry ready. While change is difficult, it is also inevitable.

The article was published with Business Standard , The Correspondent , Economic Times on August 14, 2018.