The Age of Awakening 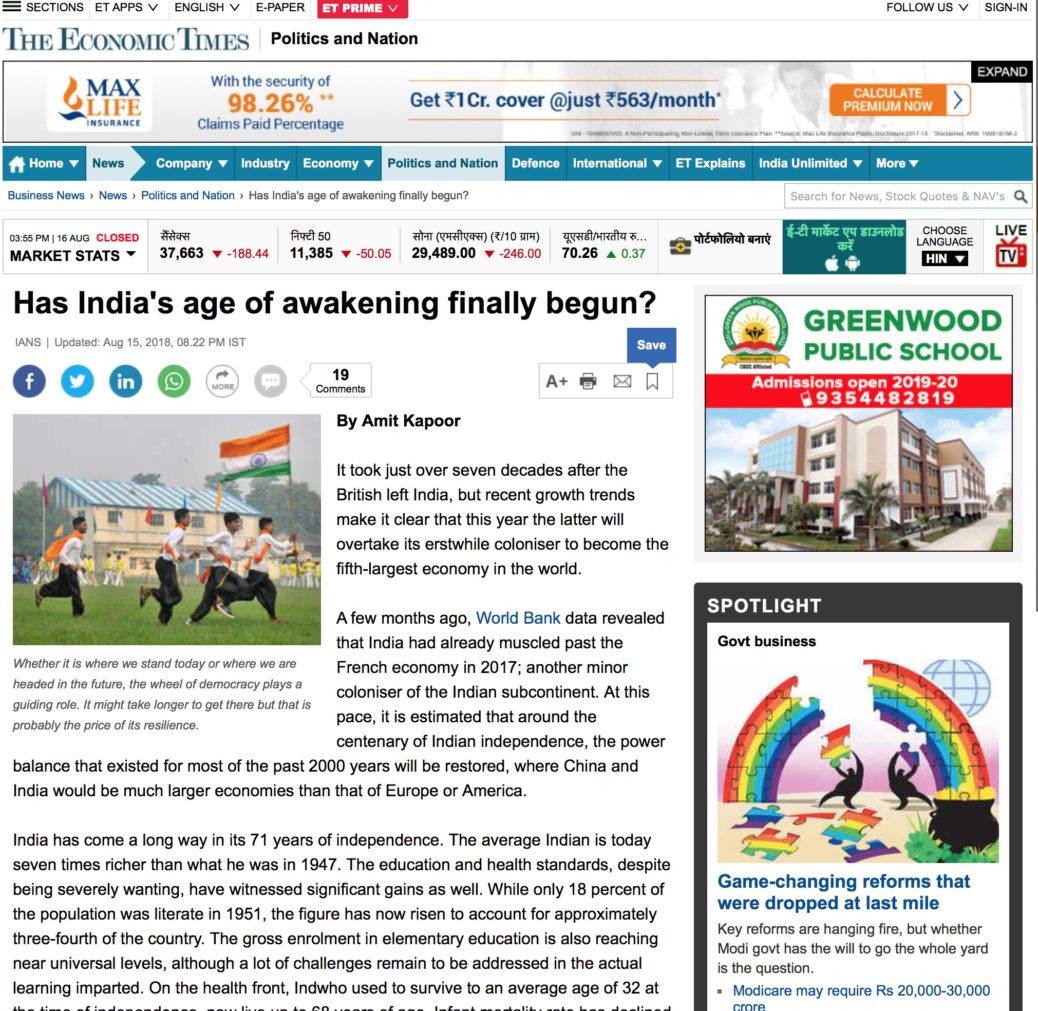 The Age of Awakening

It took just over seven decades after the British left India, but recent growth trends make it clear that this year the latter will overtake its erstwhile coloniser to become the fifth-largest economy in the world.

A few months ago, World Bank data revealed that India had already muscled past the French economy in 2017; another minor coloniser of the Indian subcontinent. At this pace, it is estimated that around the centenary of Indian independence, the power balance that existed for most of the past 2000 years will be restored, where China and India would be much larger economies than that of Europe or America.

India has come a long way in its 71 years of independence. The average Indian is today seven times richer than what he was in 1947. The education and health standards, despite being severely wanting, have witnessed significant gains as well. While only 18 percent of the population was literate in 1951, the figure has now risen to account for approximately three-fourth of the country. The gross enrolment in elementary education is also reaching near universal levels, although a lot of challenges remain to be addressed in the actual learning imparted. On the health front, Indians who used to survive to an average age of 32 at the time of independence, now live up to 68 years of age. Infant mortality rate has declined from 146 in 1951 to less than 34 as of today.

But, all of this seems less of an achievement when seen in relative terms. If the Human Development Index (HDI) is taken an approximation of social indicators, India still ranks 131 out of 188 countries in the world. On the economic front, an average Indian has an annual income of $1,940, which puts India firmly in the category of “lower-middle income” economies by the World Bank. By comparison, China, which was at the same level of per capita income as India from its independence till 1980, has achieved “middle income” country status with a per capita income of $8,827.

At best, India could be where China is today in the next decade or so. And only if it continues growing at that pace can India become larger than Europe and America by the middle of the century. It is the hope of such progress that excites the world about India. But this prospect presupposes a kind of sustained growth that no country has ever managed, with a unique exception of China. Brazil underwent a brief high-growth phase of around 8 percent annually from the late 1960s to early 1970s. Similarly, Thailand became the world’s fastest-growing economy for the decade beginning from 1985 before it was interrupted by the Asian financial crisis. Only China managed to sustain such rates for much longer than a decade, but that is a model which cannot, and probably should not, be replicated.

Yet if India manages to achieve the feat by the centenary of its independence with an estimated population of 1.7 billion, it will bring more people into prosperity than any other country in the history of the world. It will also be the first democracy in the world to do so rather than turning into one while it grew prosperous, which was the case with America and Britain. This is exactly where the Indian economy and its growth differs from the rest of the world and why its achievements are still wonderous despite their relative deficiencies.

The founders of independent India chose to adopt the path of democracy at a time when large swathes of the population were unaware of the concept. Indian leaders chose the path of universal adult franchise at a time when not even advanced Western powers had taken it up and at a scale that nobody in history had done before. As the eminent educationist, Sunil Khilnani, put it in “Idea of India”: “India became a democracy without really knowing how, why or what it meant to be one.” Yet the democratic spirit allowed the survival and progress of the country when almost everyone expected it to fall apart at some point due to its diverse mix of people and interests.

However, taking everyone’s interests into account and discussing and debating policies probably also slowed down the growth process for India. It is often argued that it might be better for economies to grow under authoritarian rule initially and slowly turn into a democracy as people become more prosperous and aware of their rights. India perhaps adopted democracy too soon. But India has led the way in making economic advances while taking the interests of its entire population into consideration. And throughout its independent history when a leader has gone awry, the democratic machine has voted him or her out of power, albeit with some lag in the mid-1970s. The Indian democracy is the miracle in its last 71 years of independence. Whether it is where we stand today or where we are headed in the future, the wheel of democracy plays a guiding role. It might take longer to get there but that is probably the price of its resilience.