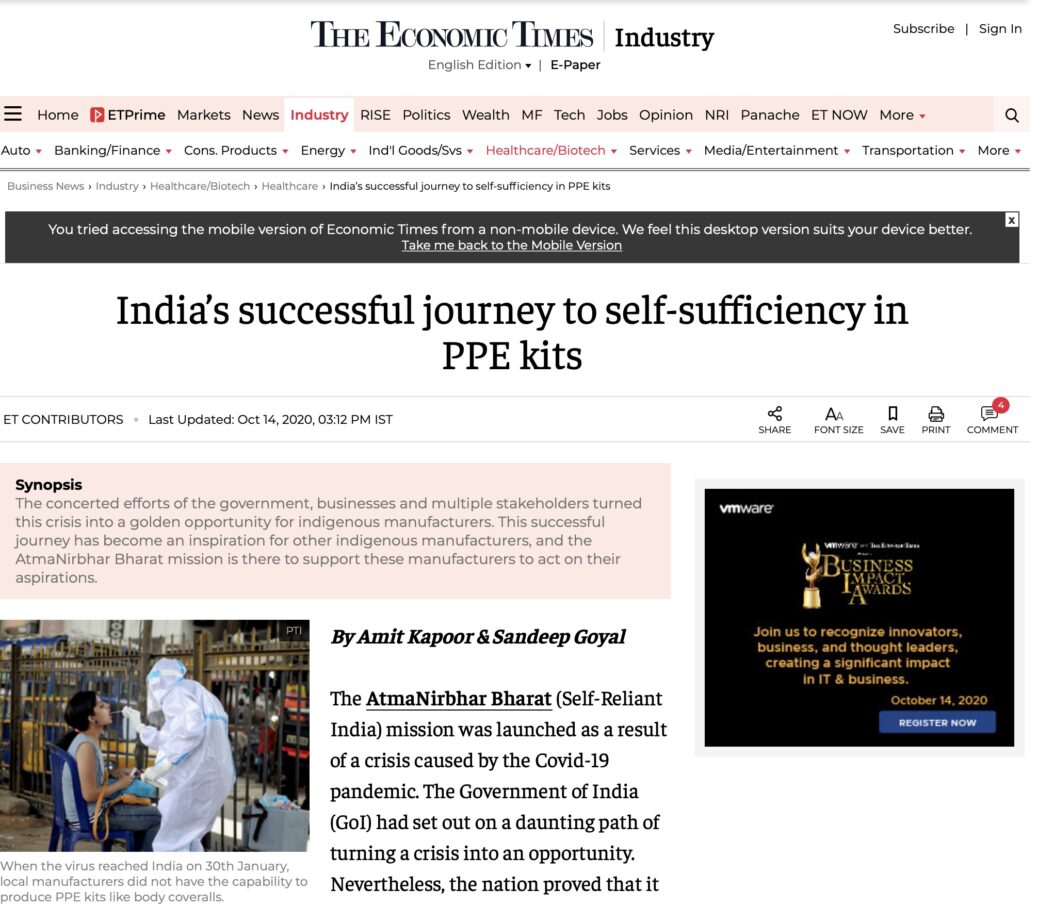 The AtmaNirbhar Bharat (Self-Reliant India) mission was launched as a result of a crisis caused by the COVID-19 pandemic. The Government of India (GoI) had set out on a daunting path of turning a crisis into an opportunity. Nevertheless, the nation proved that it is possible. The successful development of an indigenous supply chain of Personal Protective Equipment (PPE) kits in mere 60 days is an example for local manufacturers that self-reliance in a high-quality product is an achievable goal.

When the virus reached India on 30th January, local manufacturers did not have the capability to produce PPE kits like body coveralls, which are required during pandemic situation and classified as class-3 protection level under ISO 16603 standard. India was entirely dependent on imports, so another crisis in the form of export restriction of essential medical supplies around the globe worsened the health crisis. In March, Niti Aayog estimated that that we would need 20 million PPE kits and 40 million N-95 masks, which translated to 20,000 PPE kits and 400,000 h-95/FFP-2 class masks per day by July.

With zero capacity and only few days to spare, the government faced an uphill task to ensure the safety of the people and the healthcare staff including doctors, nurses and paramedical staff.

The GoI played a critical role in the journey. To begin with, a virus spreading at an exponential rate meant that the healthcare sector could collapse under shortage of class-3 PPE kits, so the decisions had to be made soon and with minimal errors. It began with planning, which involved a joint study by Ministry of Health and Family Welfare (MoHFW) and MoT undertaken in February-March for understanding the gaps in the existing infrastructure, resources, and overall, for end-to-end production, testing, and packaging of the PPE kits as per the WHO quality standards. Both textile and healthcare industry experts were involved along with industry associations and major manufacturing companies in India, with the GoI at the helm.

Another challenge was the quality of the PPE kits manufactured, which had to comply with the stringent quality standards. The pilot run in the planning stage revealed that a majority of local manufacturers were not able to produce the right fabric to withstand Synthetic Blood Penetration Test in accordance with ISO 16603:2004 (Class-3 exposure) specifications. The South India Textile Research Association (SITRA), a textile research organization was instrumental in testing samples during the pilot run. By 22nd March 2020, test samples of only four manufacturers could pass the test, thus preventing the initiative from scaling up. This led to another bold decision, launch of “Operation PPE Coverall” by MoT on 24th March, the same day the nationwide lockdown was announced.

The next step of capacity building process was itself a herculean task which coupled with another challenge in the form of the lockdown. SITRA was the only lab conducting tests, so before scaling up manufacturing, MoT and MoHFW focused on setting up a network of testing labs across the country. Amidst the lockdown, on 8th May, it was reported that seven more NABL-accredited laboratories besides SITRA have been approved for testing PPE Coveralls. Building up a network of labs ensured efficient testing of PPE kits across India and reduction in post-production timeframe involved in testing, clearance, and dispatch of the PPE kits.

MoT and MoHFW then focussed on developing a PPE supply chain, getting special approvals and clearances for coverall and fabric manufacturers, facilitating inter-state logistics, streamlining international coordination, and enabling round-the-clock support to the manufacturers on operational issues. The process required immense coordination between manufactures and suppliers at different levels of the supply chain, testing laboratories, regulatory authorities and other relevant institutions. There were regulatory roadblocks, operational issues, information gap, along with heightened logistical issues thrown into the mix owing to the lockdown.

The concerted efforts by the MoT and MoHFW ensured that these gaps were plugged. For example, to bridge the information gap, the GoI involved DRDO, Alternative Energy Promotion Centre (AEPC), and Bureau of Indian Standards (BIS) and Confederation of Indian Industries (CII) to disseminate the important information about quality, processes and ways of addressing technical and resource issues. They also brought on board leading manufacturers like Aditya Birla to share their expertise. Through coordinated effort, the GoI was thus able to develop the business ecosystem where local manufacturers could be guided by bigger players in the market and industry associations. This was one of the many tasks facilitated by the GoI through five groups constitutes to oversee five different aspects of capacity building.

In addition, the GoI also constituted an empowered committee to manage the operational challenges and for facilitating the availability of time-critical medical supplies. The Cabinet Secretary also monitored all the challenges and issues and addressed them in a time-bound manner.

The whole process demonstrates the role of the government as a facilitator, which involved extra-ordinary leadership, a major part of which played out in the ground-level execution. The success was driven by the single-minded focus of the MoT and MoHFW, commitment of all stakeholder from the top to bottom and a steady monitoring of the scope of the initiative, the limited time frame and the quality of the PPE kits. In this way, an importer country of high-quality products was able to transform itself into a self-sufficient country in manufacturing of PPE kits that complied with WHO quality standards. In fact, India has been able to achieve this milestone in a matter of 60 days from the launch of Operation Coverall.

As of 12th May, India was manufacturing 200,000 units of PPE Body Coveralls and 200,000 units of N95 masks on a daily basis. In July, India’s indigenous supply of PPE kits had exceeded the domestic demand and it exported 23,00,000 personal protection equipment (PPE) to the US, the UK, Senegal, Slovenia, and UAE. India was thus able to transform from an importer country to a self-sufficient one and later an exporter country in PPE kits.

Thus, the concerted efforts of the government, businesses and multiple stakeholders turned this crisis into a golden opportunity for indigenous manufacturers. This successful journey has become an inspiration for other indigenous manufacturers, and the AtmaNirbhar Bharat mission is there to support these manufacturers to act on their aspirations. The government has set out on a war-footing to make India self-reliant as well as a global supplier. Now, the way forward is for other sectors to replicate this success story.

The article was published with Economic Times on October 14, 2020.